Donanne and Fred Hunter returned to Africa after an absence of almost 30 years. How was it?  Their report:

What follows are notes from the journals we kept.  Donanne’s are in italics.  To retain the freshness of our impressions we have done as little rewriting as possible.  But the notes have been condensed for readability and to avoid repetition.

Arrived Bamako at about 5:00 pm on what was ostensibly Air France but was, in fact, a plane leased from City Bird the Flying Dream, an English firm.  The English pilot apologized to the passengers, predominantly Malian, for speaking no French, but he was sure most of us understood English!  On arrival we were told that the outside temperature at Bamako was 93 degrees F, but so what?  We were back in Africa!

We were met at the airport by Guiré, the English-speaking Dogon guide and a driver named Kassim who preferred to be called Champion.  Our two duffels quickly appeared and all the apprehensions we’d felt about getting our baggage to Bamako fell away.

Guiré and Champion drove us through bustling, late afternoon Bamako streets.  Many of these seemed mainly dirt roads, no curbs, with the usual trash.  I could not help thinking that most Americans would have been struck by the dirt and poverty.  But D and I reveled in the vitality of the roadsides, the variety of costumes, especially on the women who dress with such style and self-confidence, and the sheer eternal Africanness of it all.

Guiré inquired: “Would you like to change money?  I have a friend who’ll give you a good rate.”  The first uncertainties of the trip attacked me.  Hmm.  Black market?  Can I trust this guy?  But we did need CFA – central African francs – didn’t we?

We were driving through a market area, the shoulders of the road sloping off on either side.  Champion pulled off.  Out of market stalls drifted a man, well-fed, prosperous, and it all flowed like a movie version of a drug deal.  I handed Guiré 1000 French francs; he handed them to the entrepreneur.  “No dollars?”  I shook my head; we needed to unload the French francs.  The entrepreneur handed Guiré 100,000 CFA, the same exchange rate we had received at DeGaulle airport.   [They were all large denomination bills and, as we’d been warned, they proved difficult to get rid of in the countryside where no one has change.]

Guiré and Champion took us to the Mandé Hotel.  A bit east of town on the Niger, it proved to be charming.  Built in what must be “Soudanese style,” the individual, two-story buildings (there seem to be six or eight) are squarish, a Bamako brown and pale yellow with thatched roofs peeking atop them.  Before going to dinner in the open-air dining pavilion built out over the water, we stood beside the river watching bits of water hyacinth bob along indicating the direction of flow.  Glad to be where we were!

Sat beside the pool while D dressed.  A guy – German? – splashed in, swam two laps and got out, his long ponytail hanging to the middle of his back and dripping wet Niger droplets.  Breakfast on the pavilion.  Lovely watching a pirogue cross the river. 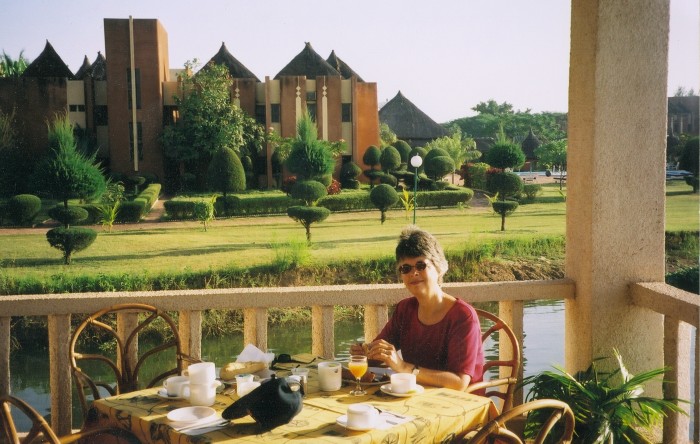 Donanne on the dining pavilion of the Mande Hotel, Bamako, Mali

Guiré fetched us with a new driver, Boubacar.  We went first to San Toro Restaurant to make a reservation for lunch.  Next door at a Super-Marché (run by white women; there was an African cashier and two white ones) we got two cases of bottled water, crackers, confiture.

Next: to the Bamako Museum for a temporary exhibit of manuscripts from a collection in Timbuktu, many of them mss copies of earlier works.  These included Korans in various scripts – Saharienne, Soudanienne, Moroccan – plus excerpts from the Tarikh es Sudan located in Timbuktu by Heinrich Barth.  A letter about Barth (maybe a safe conduct) and an inquiry in Arabic on behalf of British Consul Warrington in Tripoli seeking news of Gordon Laing, his ill-fated son-in-law.   It also sought Laing’s papers if he had been killed.   I felt a real thrill at seeing these documents.  Laing married Warrington’s daughter just before he pushed into the desert, hoping to locate Timbuktu.  Warrington permitted the marriage, but, in case he never returned, demanded that Laing not consummate it.   Laing was killed after reaching the city.  His papers were never found.  Due the intense cross-channel rivalry for Timbuktu gold, the British suspected that French officials had bought the stolen papers and suppressed them.

We drove through crowded downtown Bamako – full of noise, commotion and people darting through traffic – to find the USIS Cultural Center.  Came upon its former location, now abandoned (due presumably to the recent embassy bombings in East Africa), and went across the river to the new location – very well guarded.   Armed Malian guards inquired as to our business.  Got inside, asked for the American officer only to be told by two local employees – a man and a woman – that he now worked at the embassy.  Asked if the US had a president yet and was told by amused locals that, yes, it had one – Clinton – but not yet a President-elect.

Next to visit the Maison des Artisans in the market.  No need to fear that Africans will lose their distinctive Africanness as a result of globalization.  The market, absolutely teeming with people, vibrated with color, palavering, scents, laughter, yakking, jabber and running kids.  How does anyone make a living here, everyone selling the same goods?  But they must.

(As I write this, sitting in the late afternoon on the dining pavilion, a pirogue paddled by a kid has arrived, the kid’s father casting a circular net and pulling up tiny fish right below me!  A second pirogue has just poled up to the bank with a long bamboo pole.  This boatman – in his 20s(?) – tossed a rock onto a small beach with a rope attached to it and to the boat – it’s his anchor – and came ashore.  A young white man has just walked toward the pool and rooms wearing what most Americans would call a pajama suit of what looked like mud cloth in texture and design.  Why not?!)

Lunch at San Toro Restaurant, established by a woman who had been Minister of Tourism.  Then to Tam-Tam Tours to go over our Program with Soro, owner, and Fatima, the woman #2 who was raised in Nigeria and speaks good British-accented English.  Driving back to the hotel Boubacar (and we) were side-swiped by a gas-truck.  Guiré brought us out to the hotel in a taxi.  Boubacar was crossing a small bridge, avoiding kids returning from school on his right side.  Truck broke his outside mirror and scarred the outside of vehicle.  No one hurt.

As we left for dinner, the woman who sprayed the room each evening arrived with a baby tied to her back.  We greeted her and went to gaze at the river.  We heard voices; they seemed to come across the water from a pirogue dimly visible in the growing darkness.  But as we walked to the edge of the hotel property, it became clear that the voices were from men bathing – not having a swim, but having a bath – off the terrace of the abandoned building next door.

Hard to gauge how much technology has impacted local life.  There’s a TV set in the room, but we haven’t turned it on.  A Malian at the dining pavilion used a cell phone very discreetly, turning his back on other diners and talking quietly.  Saw a woman amid the market hurly-burly this morning with a cell phone.  And street hawkers trying to sell CDs.