In 2000 Fred and Donanne Hunter decided to return to Africa – where Fred had once been a journalist.  This was after an absence of 30 years.  We were going to the Sahara.  People wondered about us.

Were we insane?  Would our world become as tilted as the horizon in the next photo you’ll see?  We thought not.  Our friends were not so sure; they all seemed to have heard of people dying in the desert.  Of course, we wondered – even worried – about how things would be.  Were we too much accustomed to luxury travel?

At that time Donanne owned a small special interest tour company that ran upscale tours, every detail attended to, for the likes of the Smithsonian Museum and the National Trust for Historic Preservation.  Would we find “adventure travel” too close to Peace Corps style?  No!  Peace Corps volunteers didn’t hire guides and drivers and vehicles as we had done!  Was camping a good idea?  We had not even camped when we’d wandered around Africa in our youth.

Would the trip be arduous?  Would the food be edible?  How would we go to the bathroom?  As if we were children about to set off for the first time for kindergarten, this was the problem that fretted us most.  Donanne bought a portable toilet with a “durable plastic molded seat” and “heavy duty tubular steel legs.”  It folded up compactly, fit into the bottom of her duffel and served her well.  The only time I tried it – oops! – it sank into the sand.

We bought the equipment we needed: special shirts, special pants, special underwear, all designed to “wickaway” the sweat that heat would produce.  We bought sleeping equipment – stuff bags that compacted well, special compactable pillows.  And special jackets and fleeces.  We acquired special boots and special socks. 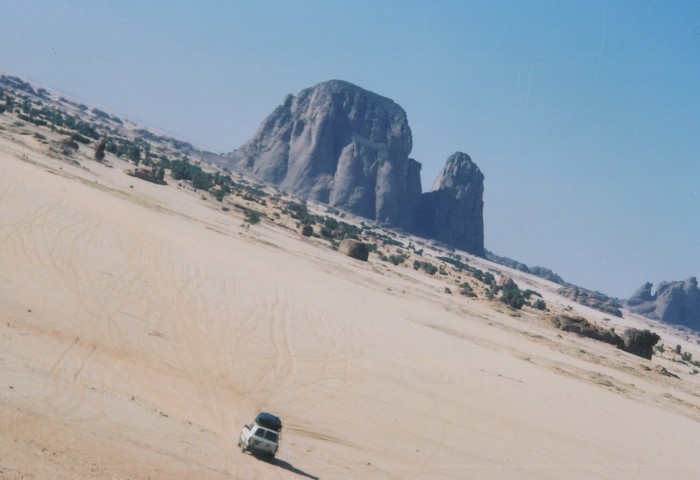 Things can get a little crazy deep in the Sahara

We got the required shots.  We bought “bonding base formula sun block” and insect repellent.  We got visas.  We went marketing for Power Bars, pemmican and raisins, cans of tuna – all of which we came to hate – and a bottle of Tang which we learned about on a trip to western China and which we loved.

And we set off.  We arrived at LAX, hoping to board with all our luggage – for we did not want the sleeping bags and portable toilet to go to India and chase us, always missing us as we crossed the Sahara.  This we were able to do; in fact, the United flight to Paris was so empty we were both able to stretch out and sleep.  The luggage arrived with us at De Gaulle airport outside Paris.  We spent the night there in a super-compact hotel room that could have doubled for a space capsule.  The next morning we had to check our luggage and, crossing our fingers, we left for Africa.

Next post:  Back in West Africa, in Mali.  How wonderful to be back!