The Travels in Africa blogger has been out traveling for about six weeks.  Donanne and I thought it might be fun to spend a month in southern France, in Aix-en-Provence to be exact, and so it proved.

I hope you’re ready to resume your armchair – deskchair since you are probably at your computer – travels with us.  We travel first to landlocked Mali in the heart of West Africa.  A lot has happened there since our return to Africa in 2000.  The Tuaregs of the desert have long sought some kind of independence or autonomy (which rather baffles the traveller who visits their largely unpeopled territory).  The overthrow of Moammar Ghadafi in Libya sent many of his partisans into the Sahara; they took their armaments with them.  These have armed the Tuaregs and the extremist Salafist Islamists, allied with Al Qaeda.  Then a military coup in Bamako, the Malian capital, demonstrated the weakness of the Mali government.  So the Islamists have taken control of northern Mali.

But our post takes you back to the quieter days of 2000.  And we begin in the traditional way of this blog:

In 2000 Donanne and Fred Hunter returned to Africa where Fred had been a journalist almost 30 years before. What was that like? Here’s their report (Donanne’s in italics)

In the early 1970s visiting Timbuktu credentialed you as a real traveler. But was it worth the effort of getting there? Unquestionably – if only to let the fact that you’d been there slip out in casual conversation. If it had not quite put its hold on us – in fact, it’s a one-visit town – we found ourselves thirty years later itching to return to West Africa. 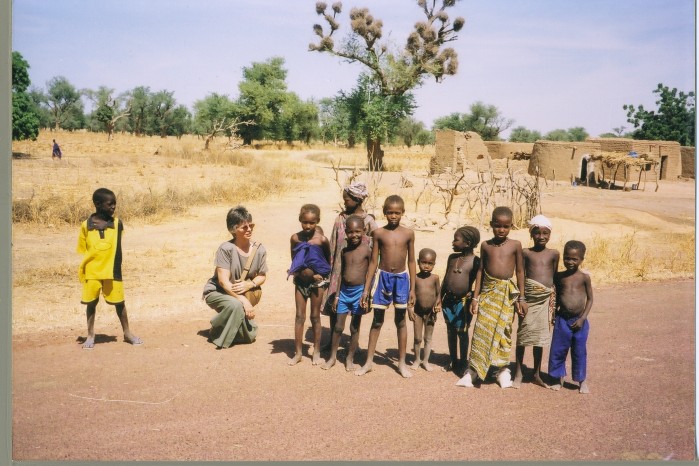 The region linked Donanne with people and experiences not available in the faster-paced, more materialistic world in which most Westerners spend their lives.  She made a list of traits that Africans embody: their dignity, beauty and pragmatism, their irrepressible curiosity, their ingenuity and ability to endure.  She wanted to revisit these.   The patience and gentleness of Africans, their sweetness and endurance seemed linked to living in tune with natural rhythm, so different from our over-stimulated lifestyles.   And who would not enjoy their vivacity, joy and generosity, their humor, spontaneity and friendliness?  Donanne wanted to reconnect with those.  So did I.

In addition, I had a not quite rational desire to plunge deeper into the Sahara, possibly because I had read of the exertions of its explorers.  On earlier trips to the region we had missed two seemingly must-see destinations.  The first of these was the famous mosque at Djenné, an architectural monument, West Africa’s most famous structure and probably the world’s largest mud brick building.  The other destination we’d missed was the Bandiagara Escarpment, home of the world-renowned Dogon people.  The Dogon fled to its fastnesses hundreds of years ago to escape Muslim penetration.  Even at the beginning of the 21st century they retained many of their traditional beliefs and lifeways. 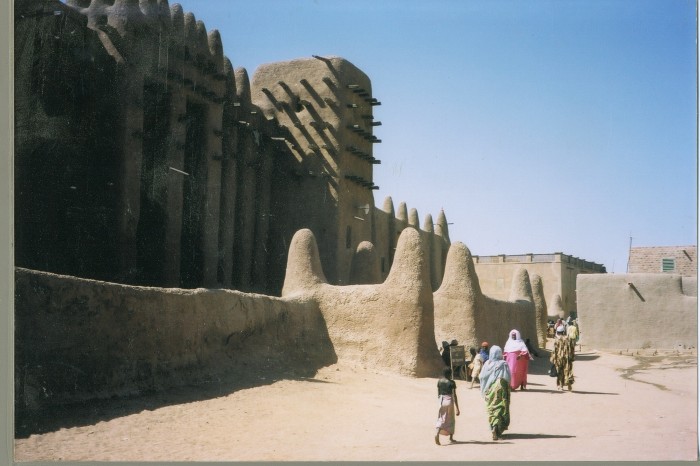 The mosque at Djenne, north side

After some calling around, we found Lost Frontiers, a two-person adventure travel company in Fairfax, California, outside San Francisco. (Alas!  By now those two unusual people have moved into African development work.)   Lost Frontiers had a trip going into the Sahara from Agadez in Niger late in the year.  The weather would be cool then – at least as cool as it ever got – and camel caravans would be operating.  Moreover, through Tam-Tam Tours in Bamako Lost Frontiers could make the arrangements we needed for Djenné and the Dogon country.

This correspondent tour company in Bamako would engage for us a vehicle with driver, a guide and tents to use.  They would provide tea and bread for breakfast.  We would provide sleeping bags and take care, one way or another, of our noonday and evening meals.  We signed on.

Next post: We can’t really answer that question yet.