Donanne and Fred Hunter returned to Africa starting at Bamako, Mali’s capital, then venturing to Segou.  Donanne begins this report:

Police checkpoint 20 minutes on outskirts of Bamako. Goats lying tied on top of jitney en route to capital.  Heads pop up; goats look around.   Man climbs up to rearrange them.  Our guide Guiré says they may be sold several times in Bamako.  Passed big soccer stadium under construction for hosting Pan African soccer in 2002 – Africa World Cup.  Soccer shorts in markets with 2002 on them.

This road we are traveling is a good, new road, one-lane each way.  In Bamako it was a major highway, though modern traffic lights didn’t seem to be working.  At a monument to the martyrs of coloniailsm we turned toward Ségou.

Afternoon rest time in 18th century Ségou.  At 4:30 guided stroll with Guiré down to Niger – a block away – to the “port.”  So much happening! Ferry with life going on: prayer rugs and people washing clothes in river, also cars, bikes and a tractor. A brick “factory” on shore, sand brought from sandbar in river by pirogues.  Mixed with cement and piled as bricks in tidy lines for those who want to purchase.  Those who prefer less sand and more cement in their bricks can buy the sand and take it home to make their own.

Walked along the riverbank past old colonial buildings.  Great expanse of river and African sunset sky.  Turned away from river and walked through neighborhood.  Children and others, “Ca va?” Children shake hands and “high five.”  We step over a trench along one of the earthen streets in which water pipes are being installed. Past a billboard advertising AIDS prevention: men and women in various garb pushing a barrier against a sawtoothed sun-figure representing SIDA [AIDS].  On the barrier are the words “Fidelité, Abstinence, Preservatif [condom].”  One sign in the local tongue, the other in French: “le SIDA tue.  ensemble stoppons le SIDA”  [“AIDS kills.  Together let’s stop AIDS.”] 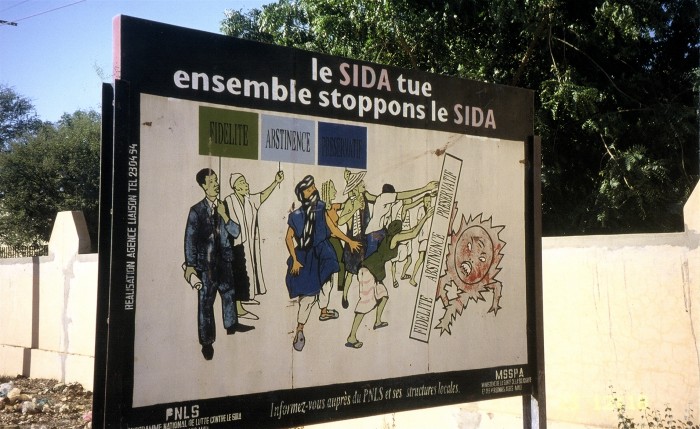 Anti-AIDS poster in Segou. The virus is the red bad guy at right.

Guiré contended that this campaign works.  That condoms are available “everywhere,” free if one cannot pay.  (He uses them, he says, even in his own marriage.  He and his Dogon wife have a 5-year old girl, a 4-year old boy, and a 5-month old girl.)  A very pleasant walk.

Dinner in the garden courtyard of the Auberge owned by a Lebanese family.  Our rooms are a block away.  Air-conditioner, t.v. w/remote, private bath with hot water, bedspreads of handsome mud cloth.  Comfortable!  Cute toddler wandered over to our door from inside the compound with one hand clutching an orange.

The life at Segou harbor on the Niger River

This is written in the Auberge motel-type room after a late-afternoon walk.  D is fixing drinks of Tang for us.  Very good – just had a first gulp! – and it’s very different from the water we’ve been drinking though made of it.

The walk could not have been more instructive.  Guiré (who slept on a bench in the Auberge while we had a late afternoon lunch of vegetable soup and Coca) had no self-consciousness about what he showed us.  There was no excuse-making for piles of trash and the general dusty messiness of African life.  He walked us first to what he termed the Ségou harbor.  Teeming with life as usual.  Pirogues plying across the river, ferrying passengers.  Vendors on the wharf, girls with fruit, artisans selling boxes, knives.

On the shore half a dozen boys, ten or younger, happily naked, splashed in the water, enjoying its coolness; later put their shorts and pants on over their wet bodies and went home.  Two white cars were parked half in the water, to get washed.  A largish woman, naked to the waist, did her washing amid the clamor, her friend washing with her wore a cloth over her breasts.  A man shoveled sand through a sieve to make bricks.

Of course, we saw mud bricks as we came along today.  These are made of mud and straw, sometimes strengthened with earth from anthills or termite hills such as those we stopped to see.  We also stopped at a village called Tingole where Champion thought we should see karité nuts being warmed for shelling over roadside ovens. 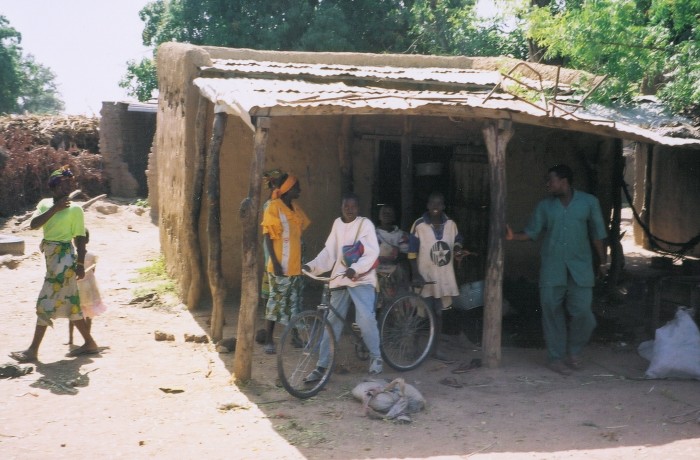 Guiré explained the process with the help of women who flocked around, one demonstrating to D in pantomime how to hurl a pestle into a mortar.

But that’s the old-fashioned way.  Nowadays a machine (we saw one in a hut down the road) decorticates the nuts.  The meat of the nut produces an oil which ran out of the machine in a very deep brown color, similar to that of the nut itself; it looked like liquid peanut butter.  When the oil is later heated (boiled?), so said Guiré, it becomes a whitish color.  He picked some oil out of a vat and gave it to D.  Good for cooking, for skin oiling and even for combating dryness at the nostrils.)

After the wharf we walked along the shore toward the setting sun.  We passed open-air markets: Bozo women’s fish markets (mainly small pyramids of small fish, dried and chopped into tiny bits), a market of pottery made from clay gotten across the river and sold wholesale up and down the river.  Stacks of bamboo poles.  Guiré said these came from the area on the Guinée-Mali border.  (Driving along we saw many villagers carrying lengths of wood to use for making charcoal and as firewood.  Occasional signs warned of desertification: “Hold back the desert!” and “Bush fires cause desertification.”  But don’t these wood markets speed desertification?  Guiré said villagers chopped down only dead trees, but who knows?) 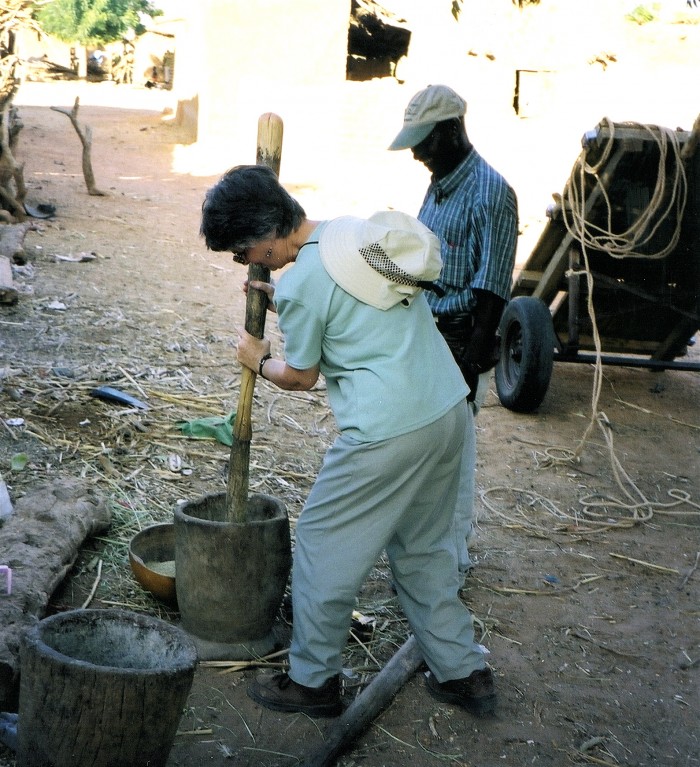 Donanne takes a turn pounding a pestle into a mortar

Leaving the waterfront we moved into the African neighborhoods.  Looked through open doorways into what turned out to be large walled compounds.  Guiré told us of his father’s living in a compound with two wives, 13 children, a younger brother and his two wives.  This pattern is apparently followed even in cities.

As we came along, Guiré said hello to a woman on a bike.  She wore a wrap-around skirt of mammy cloth and a low chemise top.  It crossed my mind that Guiré might be fixing up something for later on, especially when the woman stopped shortly afterward within our sight to chat with a friend.  Then she went on.  I did not think much about it until D mentioned the same woman and the same wondering about assignation.  Hmm.  And Guiré says he wears condoms even with his wife.

As we ate dinner in the Auberge courtyard a Malian couple arrived, he dressed down in an attractive sport shirt and jeans, she dressed up in a business suit.  They took the table adjacent to ours.  She set her sizable leather purse on the table.  He and the woman did not speak to one another during the entire course of the meal.  Do they come from a tradition where men and women don’t eat together?  Malians at another table – three men drinking with a small-breasted, big-assed girl in a sleeveless white top and form-fitting pants – came to greet the man.  Is he a local comer?

Up early the next morning for the trip to Djenné where we’d see one of the most famous buildings in all of Africa.

Next post:  Djenné and Africa’s most impressive colonial-era building