As if the famous mosque at Djenné were not enough, now Donanne and Fred Hunter got to see the town’s weekly market in full swing.  (Donanne reports in italics):

At 7:30 a.m. in the morning coolth we walked over to the market “square” that lies before the mosque and found much activity.  Stalls were being erected; “post holes” were being dug, cakes-cum-donuts being cooked over fires.  The hunkered confectioniste added oil to each of 12 concave depressions in a circular mold, then poured a spoonful of batter into each.  As these pastries cooked, another woman tended them.  She inserted a small metal utensil quickly inside each one to test it before flipping.   When done, she transferred the pastries to a deep pan and covered them immediately with a basket top.  When purchased, they were packaged in plastic bags.

Markets stalls being erected before the Djenne mosque

We returned to the Encampment and breakfasted on the terrace: tasty fresh baguettes, butter, confiture, also thé au citron and café au lait.  On the low wall lizards of various sizes stalked flies.  We watched small birds and noticed familiar potted flora.  Using three calabashes and a spigot from an adjacent part of the courtyard a woman rhythmically washed rice, probably the rice we later ate for lunch beneath a tasty vegetable sauce.

[Having read often in African novels – Achebe’s “Things Fall Apart,” for instance – of kola nuts offered in greeting, I wanted very much to see kolas and buy one.  Vendors, mostly young men, displayed large trays of them in the market.  Red and yellow in color, each about the shape and texture of a tiny mango, they would seem to us more like fruit than nuts.  Apparently they dry out, for the vendors kept sprinkling them with water.  Much to the perplexity of the vendor, I bought a single kola nut (CFA 100).  Ate a bite of it at the hotel.  Very bitter.  Gave the uneaten half to Champion.  He and Guiré chewed kola almost constantly during our drives.] 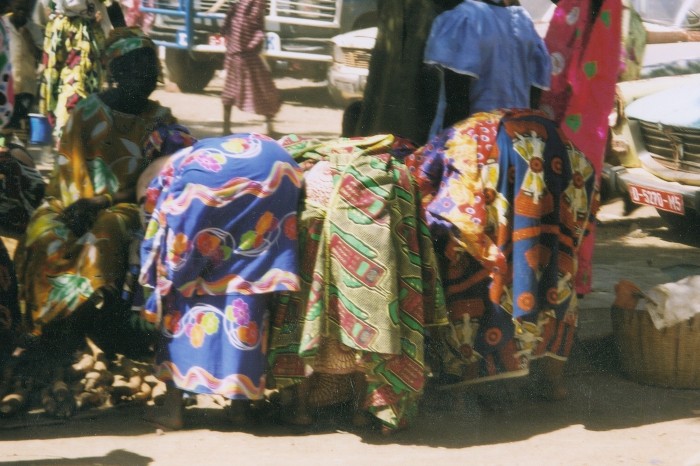 Champion appeared last night in a red suit. Having changed from his mécanicien garb, he looked very dashing.  The Land Cruiser seat covers say “racing team” across the fabric.  There are times as we hurtle across the landscape that I conclude the nickname Champion must have been won as a racer.  However, given his appearance, perhaps as a ladies’ man.  He drives with his horn.  That’s necessary here; a car must declare its presence.  Yesterday we passed a man on a bike, wavering back and forth across the road like a drunkard.  (He must have had a child on the seat before him, but we saw only his back.)  Without the horn to alert him, he could easily have lurched into our path.

We see lots of cattle along (or just off) the roads, tended by young cowherds, always walking very purposefully (but to where?).  Also many, many goats, some stubbly-legged like those I saw in villages in the Equateur.  Also many larger white animals, long-legged, and these roam around town – Djenné, for instance – quite on their own.  [These whitish animals turned out to be sheep; I assumed they were goats.]  Guiré insists they know their owners and return to them. He’s undoubtedly correct.  Late yesterday afternoon we saw sheep being given water and tied up outside a Djenné house compound.  While tying them, a boy whacked one – its horns sticking straight sideways out of its head – and sent it packing.  Apparently it had gotten into the wrong crowd and did not belong at this house!  From the third story roof of the house of Mme Sintaro we saw a herd of some two dozen white sheep trotting along the bridge leading onto Djenné island.  Quite a lovely photo which I was not quick enough to get.  The sheep came on into town, apparently untended.  They raced along a street, around a corner and disappeared. 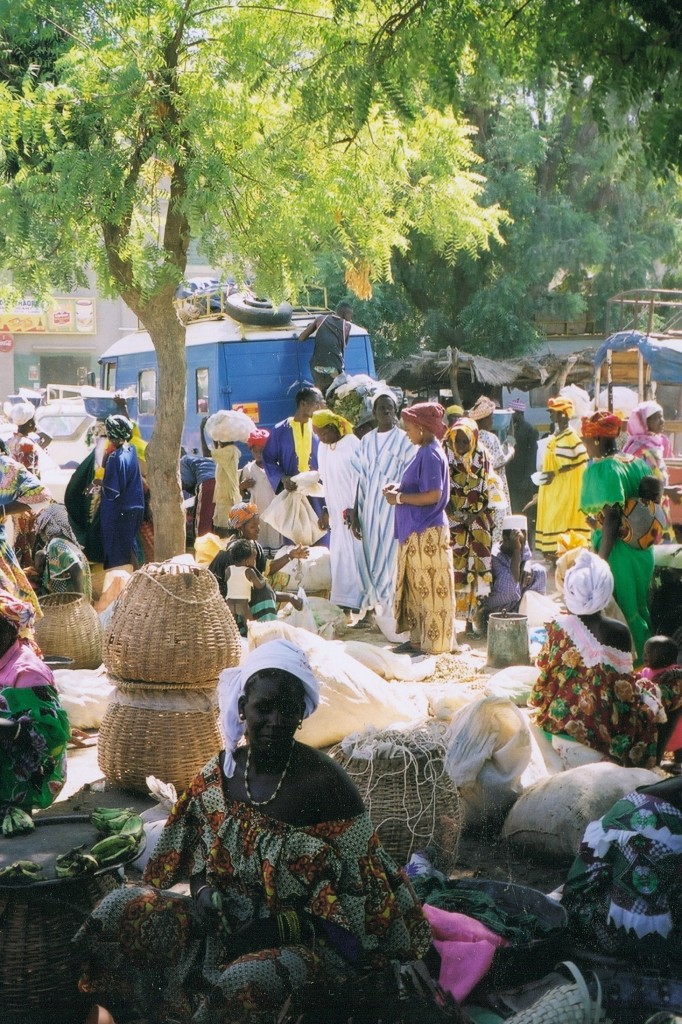 The market at Djenne

Later, at the now fully functioning market… So many colors, so much vibrancy!  Such cacophony!  Such crowds!  Metal oil drums being rolled, grains, herbs, mint leaves, yams, vegetables, bike parts, clothing, fabric, tailors working at sewing machines, shoes, pills, handmade ropes, baskets, calabashes, meat, fish, music tapes, wandering [sheep], children helping, babies on backs.  Joking, animated conversations, some beautiful coiffures – one woman’s braids ending with cowry shells.  Small gold-color earrings.  One woman wore a huge exotic pair that brushed her shoulders, in the ancient gold pattern I’ve seen on a Nat’l Geog cover, but hers appeared to be of papier maché.  Sellers and shoppers were mostly too busy to pay attention to us, thank goodness.  When we were noticed, they called out “Ca va?” or “Bonjour!” Children did approach us, again with handshakes or occasionally high fives.  Ran into “John” (who begged for a soccer ball) or his friend several times.

Returned twice to the market, the last time in the midday heat just before our 2:00 p.m. departure.  Had a short wait for the ferry and used binoculars to identify the vultures and fish eagles on a nearby island.  Continued on for about an hour and a half to Mopti.

Christmas is almost upon us.  Books make great gifts.  For lovers of the movie LINCOLN, consider ABE AND MOLLY: The Lincoln Courtship.  Or if a mystery is your thing, try JOSS The Ambassador’s Wife, set in southern Africa.  Check them out at FredericHunter.com.