Fred and Donanne Hunter returned to Africa thirty years after leaving the continent where Fred had served as a journalist and their son was born.   One of the top priorities for the trip was to visit the Bandiagara Escarpment, home of the Dogon people who live in a semi-traditional way, having chosen to resist the penetration of the West.

What follows is the first of several reports of their trip to Dogon Country.  There they were guided by a Dogon named Guiré and driven by a man who called himself Champion.  (Donanne writes in italics.) 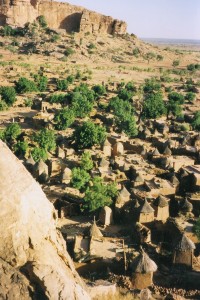 Pretty country as we drove toward Songo (pop. 2000).  Birds – black with brilliant turquoise, some with long tails, some tiny reddish-headed peepers.  Arrived on a bumpy road – a new one is being built and looks most promising.  Finally closed windows because of red dust.  Champion turned on the air-conditioning for the first time.  Tour of attractive Songo.  Past open-air elders “court” with ultra-thick “thatch” roof and y-shaped log supports decorated with fertility symbols.   No photos allowed.

As we hiked up out of the village, past handsome mud dwellings and jaunty sometimes-decorated storage huts with “hats,” children greeted us: “Ca va?”  “Bic?” “Cadeau?” And sometimes with calls of “Toubab!” (whitey).  The toddlers aren’t sure about us and so far on the trip, four of these little ones have burst into tears on seeing us. (The previous photo was taken from the circumcision site.) 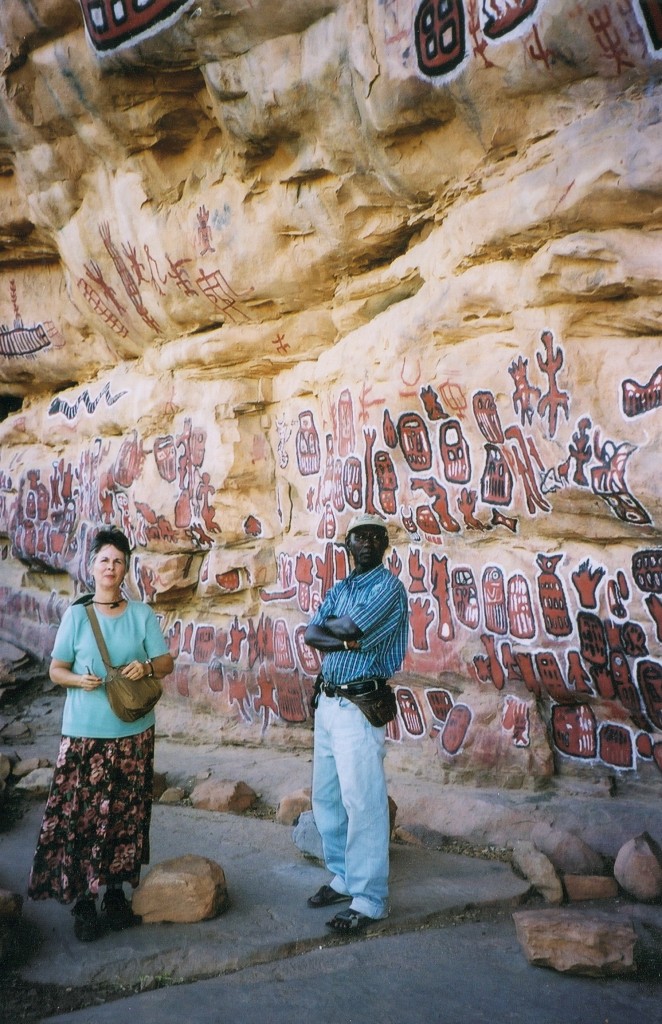 Donanne and Guiré at the circumcision site. Note the art.

We reached a circumcision site on the escarpment overlooking the village.  Guiré said it was the only one with rock art.  The cliff above was well-covered with painted symbols, red, white, and black.  Recognized a snake and a lizard.  Guiré told us that the snake is an important Dogon symbol.  At the time long ago and far away when his people were preparing to move to the escarpment to escape Muslim penetration [so it is always said], they prepared to take with them the bones of an ancestor.  When they dug for the bones, they encountered a snake.  Guiré claimed that this snake led the Dogon to the land they settled.

Dogon women are not allowed at the site.  When there is a ceremony every few years for boys from 10-12, women bring the food to a halfway point up the escarpment.  We saw an area where there were natural stones used as stools by the initiates, and climbed beneath an overhang to peek at a cache of gourd instruments used only in the initiation ceremonies.

Midway back down to the village, we stopped at an adult school – a small, clean mud room (the whole village seems clean) with a world map on the wall, a green shade tree out front and a view of the rest of the village below.  The local schoolmaster asked for a contribution and we made a small one to adult ed.

(En route to Songo we passed several distinctive new schools for children.  There’s one across the way from this village.) 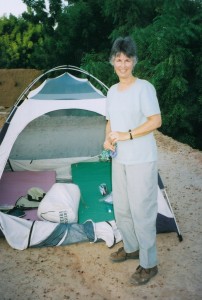 Returning to the encampment, we find we are to stay here tonight.  An attractive windowless little room is shown us.  Or we can pitch our tent on a rooftop.  We choose the rooftop where the temperature is cooler.  Guiré and Champion set up the tent!  We climb the notched y-shaped log that is the ladder and note the friendly warmth of the mud roof underfoot.  Next door are the clean, roofless squat-only W.C.s – one for men and one for women.  When we descend, the guys have set up for us chairs and a bamboo table with a pretty indigo cloth under sheltering trees in a corner of the compound, near the wall.  We dine on a can of tuna (from home), rye crisps (from Bamako) with peanut butter (from home) and confiture (from Bamako and of a delicious fruit unknown to us).  We round out our meal with a ginger-snap bar just as the sunlight disappears and amazing starlight takes its place.

Up onto the rooftop at 6:50 p.m. into tent and onto foam mattresses.  It’s still too warm for covers.  After two hours add sleeping bags.  Now the stars are even more remarkable!  Lie there listening to wonderful village noises: chatter, children, goats, donkeys, muezzen.  Finally voices below in the encampment cease.  This is Guiré’s cousin’s wife’s village, so he is guaranteed a good meal and visit.

In the middle of the night there is complete silence interspersed with the braying of donkeys with their “echoes” far off, the barking of dogs (we never saw them!) and finally a rooster.  Then lotsa roosters, and the sky to the east is faintly gray and … the moon rises!  Much later, more roosters until they sound like a chorus and eventually the east becomes a pale coral.  Finally around 5:45 we get up.

The village has a new aluminum water pump!  We “queue” to wash faces and brush teeth.  Local women and girls cannot quite believe that the white couple standing nearby really intends to use the pump.  Our table is prepared with fresh French bread, vache cheeses and a pot of hot water, packets of tea or café, and a sack of sugar.  I add Tang to my tea and think it sinfully delicious, not being able to imagine anything tastier!

We decamp and depart by 7:00 a.m. along the road to Bandiagara and the Sangha market.  Stop for photo ops en route – beautiful, stunningly green onions and rice and more of those strangely juxtaposed water lilies grown in terraces. 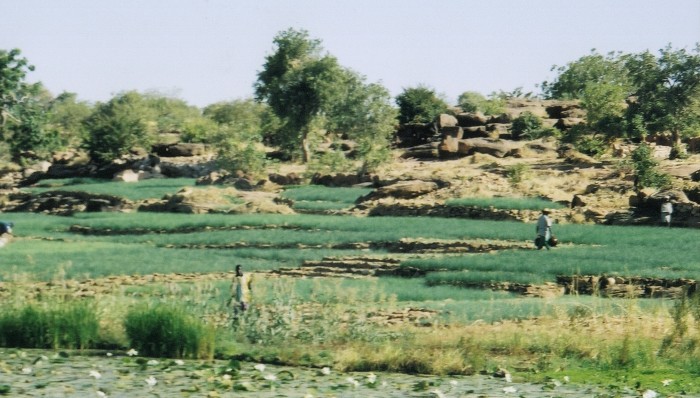 The next day we hiked down quite a steep trail to the village of Banani.  The Dogon were dancing along it in flipflops with bundles on their heads.  It looked like this: 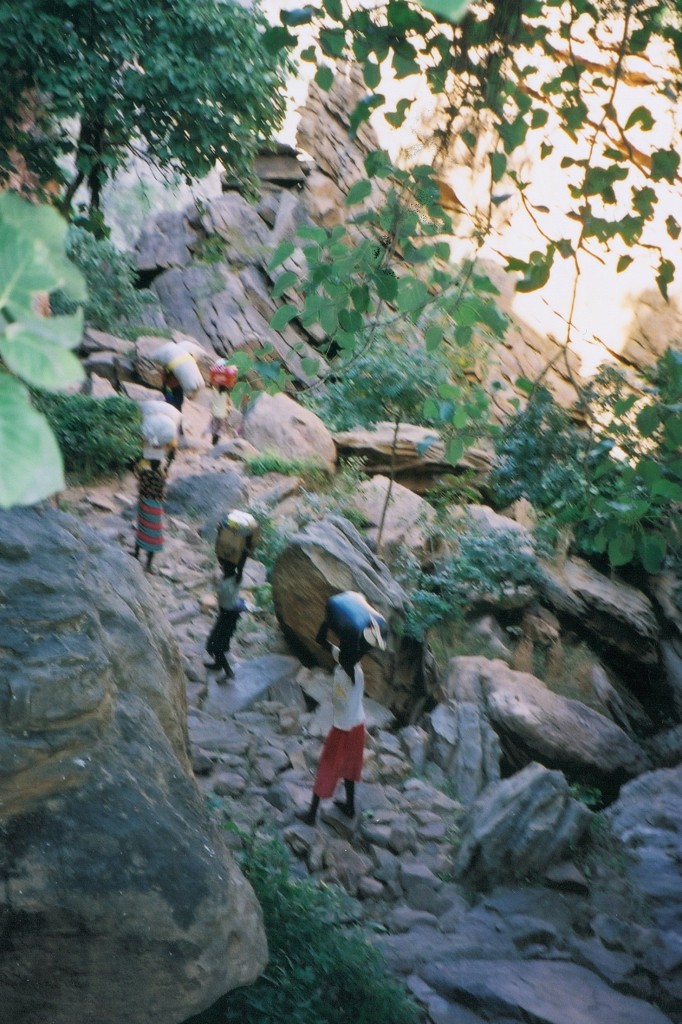