Fred and Donanne Hunter returned to Africa thirty years after leaving the continent where Fred had served as a journalist and their son was born.  Donanne’s reports are in italics.

Donanne and I had a vivid 30-year-old recollection of Mopti, Mali, and were curious to visit it again.  In 1970 en route to Timbuktu our DC-3 from Bamako stopped there for an hour.  That hour left us with indelible impressions.   Seen from the air, Mopti appeared comprised exclusively of mud buildings, very dark in color.  We disembarked from the plane, stretched our legs, used the facilities and then reboarded.  Sitting in the last row of seats, all buckled in, we heard the steward struggling behind us to arrange items.  Weight distribution is always important on small planes.  As the DC-3 hurtled down the runway for take-off, we felt a cool breeze burst into the cabin.  We saw sudden light, heard a louder roaring of motors, the whoosh of motion.  We turned in our seats, looked over the seat-backs.  The steward had opened the door.  He was wrestling with a footlocker, obviously some passenger’s luggage.  He pushed the footlocker out the door and closed it.  A bit lighter now, the plane lifted into the sky.  For us that was Mopti.

Swam in the azure mosaic Kanaga Hotel pool under the watchful eyes of a Dogon dancer painted in a mural on a nearby wall.  Our air-conditioner is operated by remote control, but we turned it off and opened the screened window with its propped-out shutter.   Good cross-ventilation with bathroom window also open.  Beds are VERY firm, but that doesn’t deter sleep.

Before dinner thought we’d walk along the river. We started down a road lined with lovely big trees.  However, whenever there was traffic we had to dodge it by stepping off the pavement.  Back at the Kanaga, a number of Egyptianesque cats/kittens around.  That small, thick Korean grass works well here and makes a pretty carpet between walkways.  Dinner unremarkable: chicken that is mostly bone.  Poor thing! 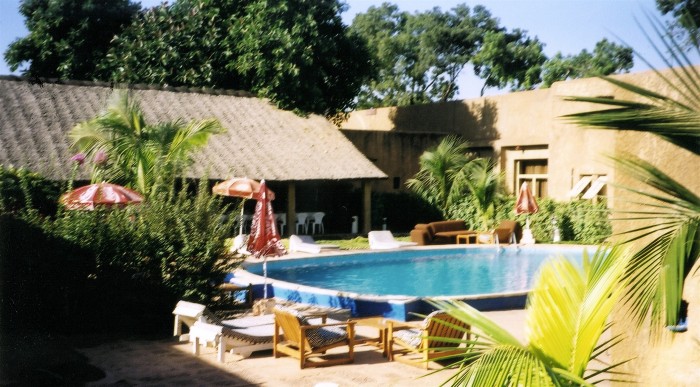 After dinner, armed with a tiny flashlight (there are no street lights), we once again headed out for a walk, going along the river in the direction away from town.  Not too far down the road we encountered a sign, interdicting “taxis and tourists” from a military installation, so we returned and packed for tomorrow.

Next a.m., an early-before-showers walk toward town and to the port.  A lovely river with early morning activities – bathing, washing – going on below the road.  Returned for breakfast in the front dining room from a buffet offering tea/café, croissants, baguettes, vache qui rit cheese, confiture, butter, watermelon and choice of juice.

Took off with Guiré and Champion on a 12 km jaunt to Sevaré (location of the airport we once visited so memorably), reversing the direction of our arrival yesterday.  The straight road runs atop a dike between rice paddies with blooming water-lilies and -hyacinths in which the cattle are grazing!  In Sevaré a visit to the Baba Peace Corps museum & shop.  Its loft museum displayed books and amber, Timbuktu sand and various regional artifacts.  A true scholar showed us around.  Purchased a colorful red, black, orange and green table-size cloth with delightful no-two-alike depictions of local activities in its 99 squares.  Also bought a pair of red, blue and silver earrings with Sahelian chevron design.

Back in Old Mopti Champion dropped us outside the 1920s half cement/half mud mosque.  Guiré walked us through the market, partly stalls and partly large open building.  We stopped at a stall with carvings, and Fred treated me to a necklace that goes with the chevron earrings.

Ambled over to watch blacksmiths make square-headed nails over little fires and carpenters building pirogues by the river.  Moved on through dense, busy market/port activity to the Bozo Restaurant and Bar on a point overlooking the harbor.  A perfect spot for observing life on a cargo-laden pinasse [a long, canoe-shaped craft].   It was covered with woven matting and had handsome cargo containers of the same material.  Large crossbeams served as seats for passengers; movable planks laid across them provided a path from one end to the other.   Sacks of goods stored below the crossbeams were being used as footrests or couches.  And between them ladies were cooking lunch over braziers.  Such grace displayed by passengers negotiating the planks in flip flops!  Men socialized at other end of boat.  A very little baby, clad in only a shirt and carefully monitored, crawled along a plank from mom to dad a few feet away.  And suddenly leaked, tinkle everywhere.  Dad cuddled baby and later, when lunch was ready, put baby into the waiting arms of grandma.  On the other side of the Bozo Bar, watched the construction by several young men, of a bent wood and finally mat-covered, pinasse roof. 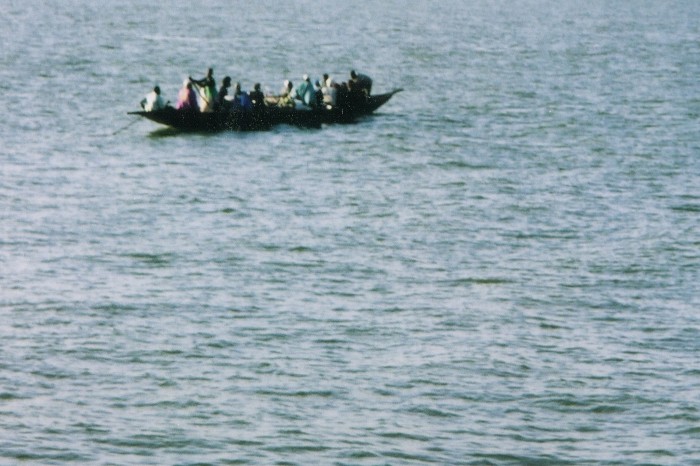 Outside the Bozo Bar I observed a rare moment of flirtation between a young man and a girl.  Unlike American society where it’s commonplace to see teenage couples together, often holding hands, sometimes necking, this is most unusual in Africa.  I observed a fleeting moment, the guy heading off in one direction, the girl in another.  His right hand, outstretched, clasped her hand.  He whispered to her; perhaps confirming an occasion to meet.  She glanced at him, smiling with shy infatuation, a smile certain to boost his morale.  He smiled back, Joe Confident, and they pulled away from one another.

On the terrace of the Bozo Bar, looking back toward the town, travellers we’d seen coming along were lunching.  We bantered with a guy from a large group of Americans about the as-yet undecided (Bush-Gore) presidential election, amused that we Americans who are so ready to tell other people how to manage their affairs were having difficulty managing our own.  This group was heading up river to Timbuktu – by pinasse.  Originally I’d hoped we could go from Mopti to Djenné this way, but not now, not after seeing what a pinasse was: a long, wide, canoe-shaped craft, powered by an outboard, with benches for passengers (no back rests) and usually overhead something to protect them from the sun with a toilet compartment in the rear covered by a reed mat.  I didn’t envy those Americans their three days on the river.

At the table next to ours was a young couple, obviously Americans and just as obviously eager not to be associated with their fellow countrymen.  I eventually struck up a conversation with the guy.  He turned out to be a graduate student in anthropology/history, thoughtful, soft-spoken, resident (I believe) in Guinée where he was doing research for his dissertation.  Mentioning that I’d once covered Africa as a journalist, he seemed willing to have sporadic chat with me.  I expressed my distress that virtually all reportage of Africa stressed the continent’s negative aspects.  I gave as an example the reports of recent mutilations of children by drugged rebels in Sierra Leone.  The grad student said he’d investigated that situation and found the reportage accurate.  I didn’t doubt its accuracy, but wished subjects other than atrocities and pandemics could be covered.  I’m not sure we connected intellectually, but when he and his wife left the terrace, we wished each other well.

We finally ate riz avec sauce tomate and drank frozen Cokes.  One of these erupted like Vesuvius all over the tablecloth.  Guiré ate with us, after taking our passports to the police to get Dogon stamp for entry.  That took awhile because the police kept being at lunch.   Champion went off to be with friends, I would imagine.   After lunch, while waiting for Champion, watched a haircut in the market – like a sheep-shearing, using a special type of razor.  Back to hotel to pick up bags and off toward Guiré’s homeland. 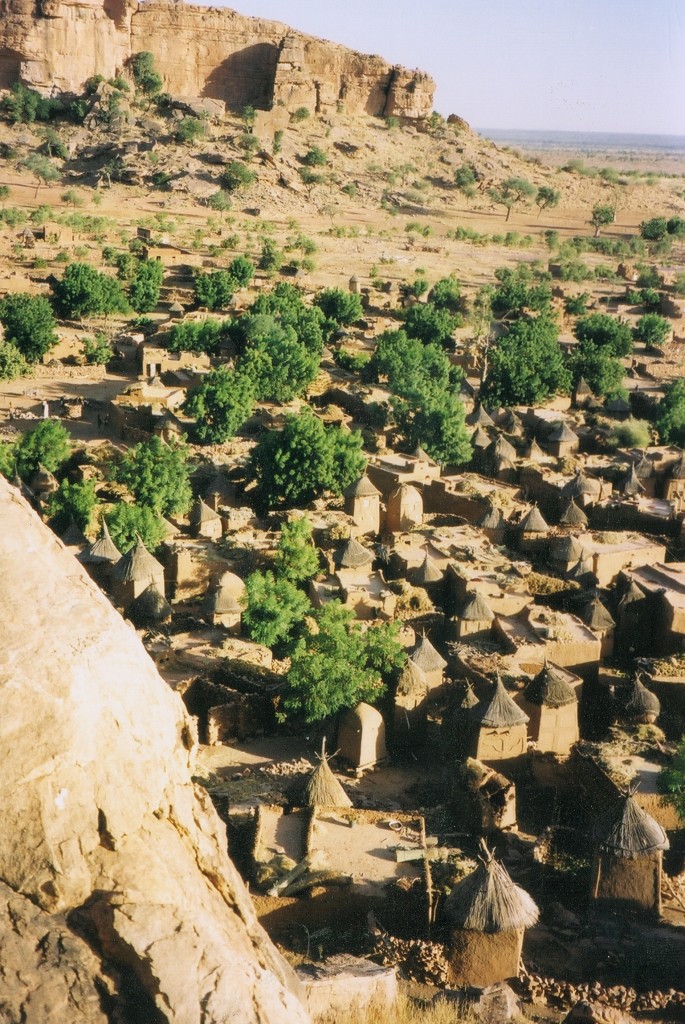 Where we were headed: a Dogon village from the escarpment

Next post:  A visit to the Dogon who have held out against civilization.

Christmas is almost upon us!  Books make great last-minute gifts.  Something based in Africa?  Consider JOSS The Ambassador’s Wife.  Liked the movie LINCOLN?  Try ABE AND MOLLY: The Lincoln Courtship.  Click on FredericHunter.com.