After 30 years Donanne and Fred Hunter returned to West Africa in part to see the mosque at Djenné.  Today we would see it!  (Donanne’s in italics):

Up at 6:30 and quick walk back to “port” to watch Sunday a.m. activity.  Saw sand-gathering on a nearby shoal.  Breakfasted in the garden courtyard amid great excitement as three brides and their entourages had photo sessions – stills and videos.  The brides dressed in traditional white western bridal gowns, other ladies in multi-colored attire – so beautiful! 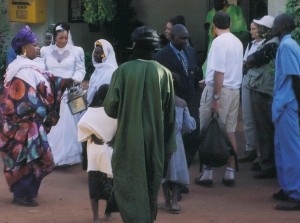 A Segou bride leaves the restaurant, her photos taken

Grandmothers to very young nieces accompanied the brides.  Then the  prospective husbands, in black business suits, entered.  Everyone paraded out to the Auberge swimming pool while being videoed.  They passed so close to our table that we had to jump up and lift it out of their path.  The couples posed in self-conscious ways that seemed un-African; learned behavior.  There were also group pictures with families.

When we left the courtyard, I hotfooted it to get the camera and return for photos.  As the group was just leaving, I was able to grab two or three shots. 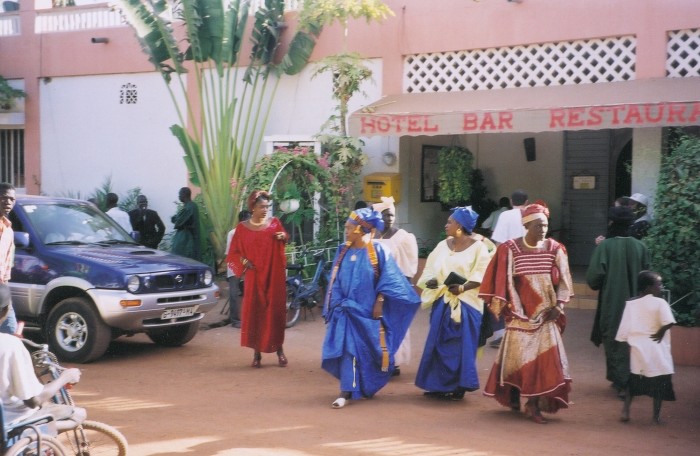 Departed before 9:00 for Djenné.  Baobab trees, calabash fields, horses, a few camels.  Cool day at first.  By 10:30, warm.  Fred wanted to see calabashes growing so we stopped under a  leafy baobab with its dangling mango-shaped fruits, weaver bird nests, twig-like compositions and lizards.  As we walked to a calabash field, a dozen children cheerfully followed us.

Guiré says the calabash gourds die on the vine and the seeds are removed for planting.  Dried gourds are made into plates or containers.  While Champion changed a slow-leaking tire, the children came and sat with us by the steep side of the road.  Several boys had slingshots used to get doves.  Guiré says he was quite good with a slingshot as a boy and got snakes for food. 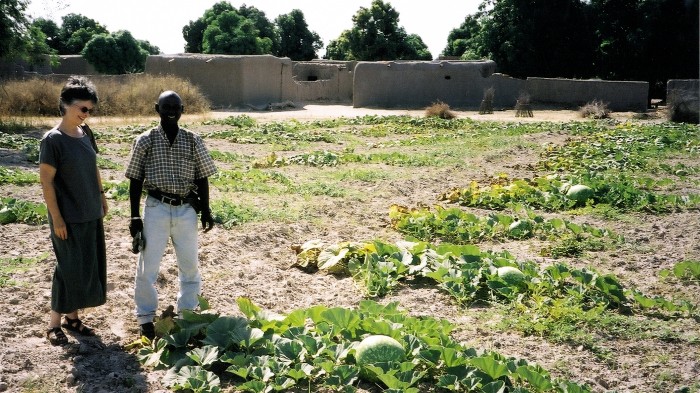 Donanne and Guire in a field of calabashes

When we turned off the main San-Mopti road onto a spur to Djenné, we very quickly passed a village – Poromani – with a mosque of Djenné-esque architecture.

Asking if we could photograph it, Guiré led us into the village, inhabited, he said, by Fulani, Malinké, Bambara and Bobo (there were characteristic Bobo granaries).  (I wonder if this is true.  These villages have the look of being peopled by blood relatives.  Perhaps that’s Guiré’s hope for the future of Mali.  Hmm.) 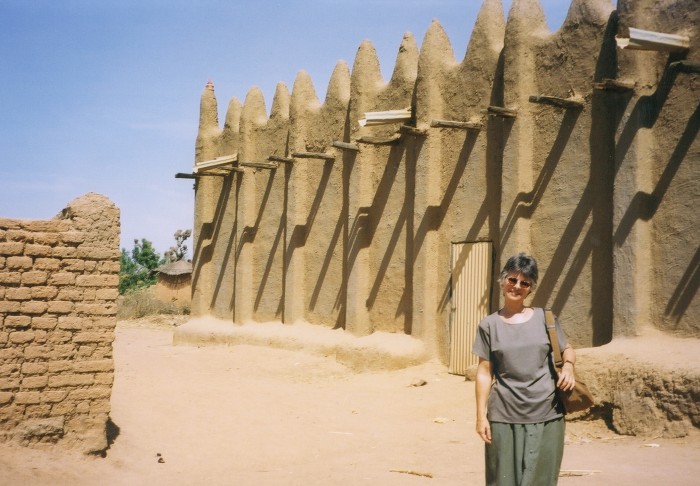 Walking to the mosque we were accompanied by another band of small hosts.  One held my hand as we ambled along. We walked around the mosque, then through the village itself, inspecting the mud walls, followed everywhere by wide-eyed kids.  We stepped out of the way for cows using the same passageways.   Eventually you begin to suspect that the trash which seems omnipresent on the public streets does NOT exist in the living compounds.

As we came back out to the road, several of the young hosts broke into dancing and rhythmic shouting at the sight of a camel that had passed by during our visit. 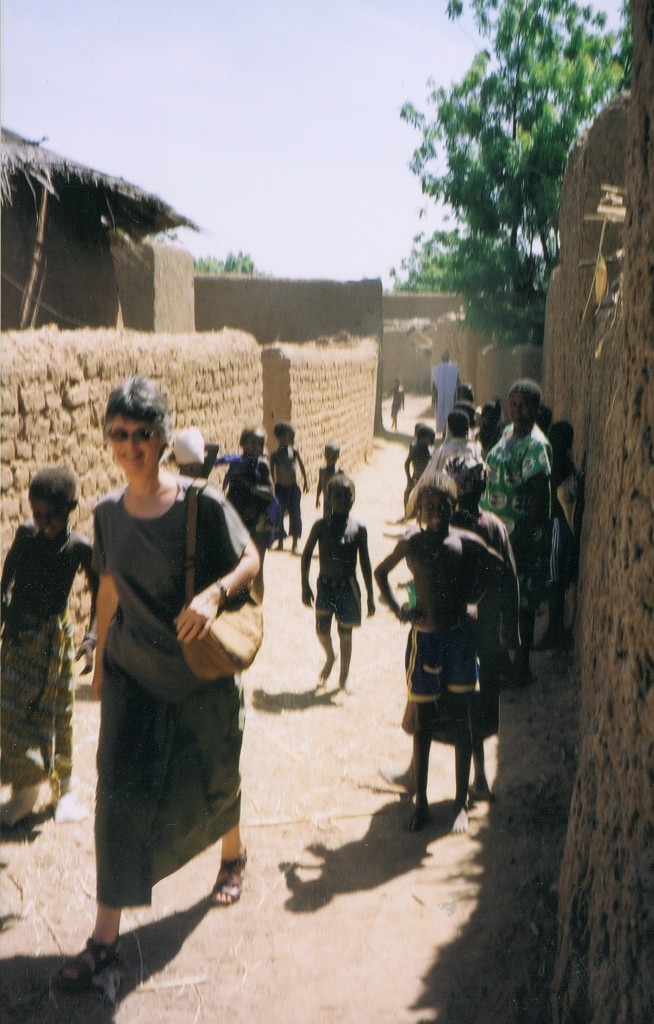 Beyond this village we arrived at the slip where the ferry crosses the Niger.  (We were in the Inland Delta where water lay at times all around us.  The road led upon a dike where lush swamp weeds and water lilies grew on both sides.)  On the ferry (four vehicles) were ladies selling bracelets and beaded jewelry. Also a young French couple (with chauffeur) with whom I struck up a conversation.  They had been at the Auberge and recognized us from there. 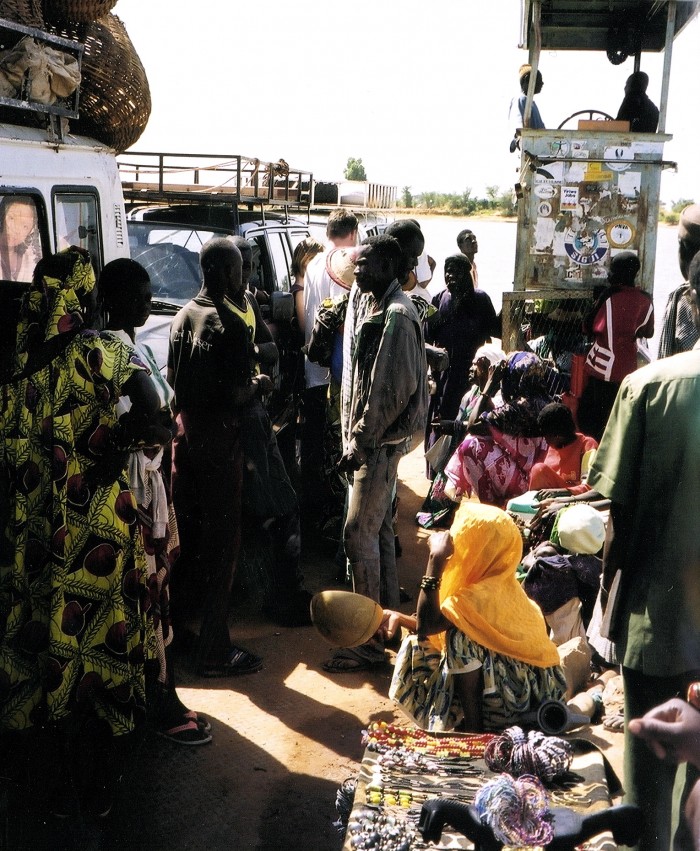 On the ferry to Djenne

The roads in Mali have been impressive.  But the road into Djenné is rutted.  We drive past the famous Soudanese-style mosque, reputedly the largest mud/clay building in the world, enjoying the town’s Afro-Arab architecture.

We arrived in Djenné about 1:30 pm. En route to the Encampment we passed the famous mosque, designed by an African architect, but built by the French just about a century ago.  Tradition claims that the first mosque was built in Djenné eight centuries ago by a sultan who converted to Islam and transformed his palace into a mosque.  A later sheikh built a second mosque – this in 1830 – and let the first one fall into disrepair.  The massive walls have a double purpose.  They bear the weight of the structure and also provide insulation from the sun’s heat.  During the day, the walls gradually warm up from the outside; at night, they cool down again.

The wood jutting out from the walls is palm wood scaffolding, seen in many large buildings in the Sudan.  It serves as supports for the workers who apply plaster during the annual spring festival to restore the mosque.  A guild of senior masons supervises the repair and maintenance of the mosque and they organize the annual spring replastering. 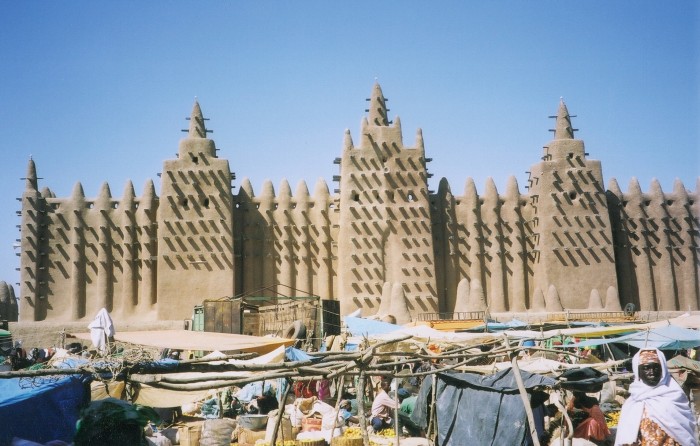 The mosque in Djenne as the Monday market gets set up

In the mosque’s presence you are not possessed by the romantic, gotta-see-this spell that good photos induce.  Which may be just as well since tourists are not allowed to visit it.  The mosque sits in the town’s main square behind a bus-park.  A market takes place there every Monday (which is why we’ve arrived here Sunday to spend the night).  The market, once full of exotic products – gold, salt, slaves – now mainly features grain, says Guiré.  We shall see.

No visiting?  We are told that some time ago an Italian fashion photographer and his models posed in and around the mosque wearing clothes and striking poses that gave offense.  Now non-Muslims are not allowed to enter the mosque or its terraces.  We walked around it in late afternoon, led by Guiré, then strolled through the town. 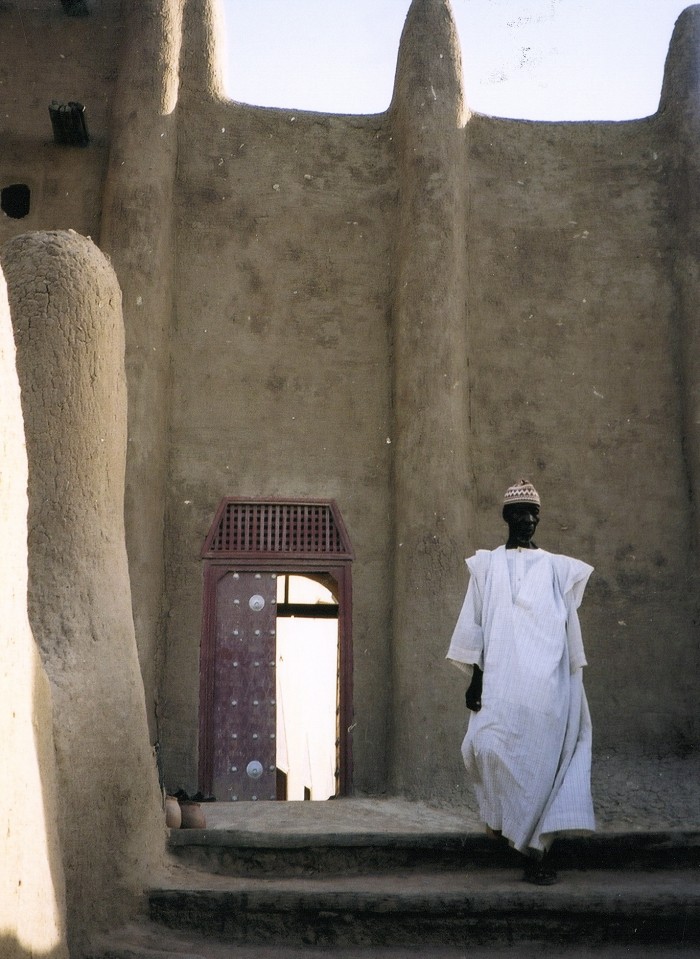 A terrace of the Djenne mosque off-limits to non-Muslims

Guiré took us through the labyrinthian streets to the home of Pama Sintaro where a local cooperative creating fine mud cloth works of art is located.  We found the central courtyard shaded with a “U.N. High Commissioner for Refugees” tarp.  Children and adults were watching a t.v. program on African animals that looked like something we might see on the Travel Channel: zebras, wild dogs.   We climbed narrow, dark, uneven stairs to a third-story rooftop view of the distant mosque, then descended to middle level to a well-filled gallery of mud cloths.  We looked.  We sat.  They showed.  We chose two to see in the daylight.  Fred bargained.  We purchased both.

The larger cloth has “hunter” symbols, O and X.  O = holes hunters dig and cover with brush to trap passing prey.  X = hunters in trees waiting for prey.  Somewhere I read that the hunters are considered very brave because they spend the night outside the protective embrace of the village.

When we arrived we noticed a little albino girl on the mid-level near the fridge in the passageway leading to the “gallery.”  Later we saw a young woman albino and another, all blue-eyed blondes with African features.

Returning Guiré walked us past the home of the town’s hereditary chief where, he says, René Caillié stayed.  (Caillié, a Frenchman posing as a Muslim orphan from the West African coast, was the first European to enter Timbuctu and tell the tale.  A daring adventure!)   I’m doubtful that Caillié stayed at the house.  He was not hobnobbing with chiefs – but he may have passed through Djenné.

Later when Fred and I went over to the mosque to see the beginning of tomorrow’s market preparations, a boy walked beside me speaking English.  He said his name was John and that when he and his friend (beside him) were not at school studying English, they played soccer.  He suggested that I provide the money for a soccer ball. I saw him twice more.  The second time he appeared saying, “Do you remember me?  I am John.”  Finally, after mentioning “soccer ball for tomorrow,” he left us at the open gate of our compound.  Had to admire his gentle persistence!  Wish I’d bought him the ball. 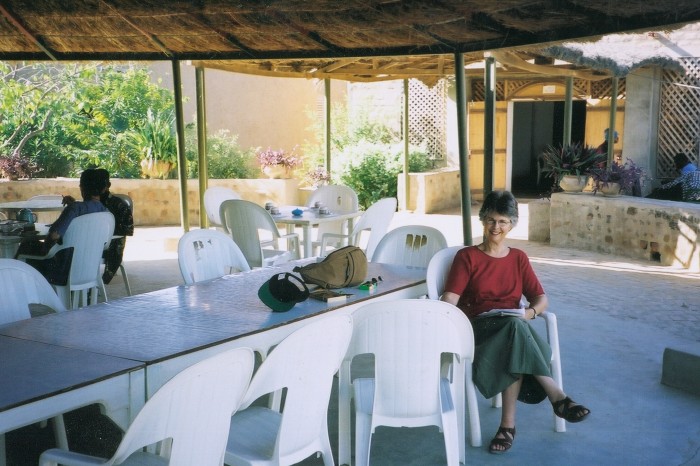 We dined on the terrace under a thatched roof.  German, Spanish, French and English were being spoken around us.  Fred enjoyed the local catch, capitaine, once again, and I had onion soup.  These were served consecutively, not simultaneously.

Our small room is turquoise with an air conditioner, something Phil Hassrick managed to obtain for us at the last minute.  It’s an alternative to his original suggestion: the rooftop where others are sleeping, including Guiré and Champion. There is a low table-cum-bench next to the turquoise bedspreaded bed, three wall hooks and a window covered by dark wooden shutters, nailed shut.  The showers and toilets are at one end of the hall; the other end leads to the terrace where meals are served.  We slept on top of our turquoise bed cover, using two cloths as top sheets (one a batik, the other a bright pink silk scarf of my mom’s).

Next post:  Shopping African style.  The market in Djenné