Fred and Donanne Hunter returned to Africa thirty years after leaving the continent where Fred had served as a journalist and their son was born.   One of the top priorities for the trip was to visit the Bandiagara Escarpment, home of the Dogon people who lived in a semi-traditional way, having chosen to resist the penetration of the West.

What follows is the second of several reports of their trip to Dogon Country.  There they were guided by a Dogon named Guiré and driven by a man who called himself Champion.  (Donanne writes in italics.)

I am writing this at Campement Sangha after a walk through the market.  As we approached this stark hilltop settlement, we passed women carrying loads on their heads.  Walked past freshly-slaughtered cattle parts, skins spread out, vultures above and nearby.  Guiré bought some millet beer, which smelled very good, and explained the brewing process.  [We passed on trying the beer and Guiré drank it up.]  Baobab bark is used to ferment the liquid.  Leaving the newer part of town, we walked across a sort of valley with pretty garden patches and up a rocky slope to the old town.  There we went past the menstruation hut (when you don’t go there, everyone knows you’re pregnant) and past the distinctive compound of the Hogon [a spiritual/ritual leader] to the campement [encampment]. 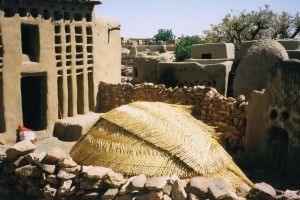 Fred and I have picnicked on peanut butter, jam and crackers, and a pemmican bar.  (I will never on this trip be hungry enough to enjoy this latter delicacy! but Fred finds it not half bad.)  We’ve added to our newfound delectations Djina Pomme, a delicious local bottled sparkling apple “extract,” served cool with a breeze.   After lunch, we’ve busied ourselves for several hours reading and catching up on the diary under a thatched sunshade on the encampment terrace.  The rooms here are simple, clean and airy with views out over the countryside.  The WCs have doors that close.  A European woman came over to a spot where water was gushing out of a spout into a temporary catchment basin to rinse her hands.  An employee ran over. He took her to a different water source, filled a bucket for her and indicated that this is where rinsing should be done.

Guiré has just come for our departure asking for our patience.  He’s encountered people come to market from his village (some 40 kms from here).  They will take a letter to his parents.  He is pleased to have the opportunity to communicate with them and relieved to learn that they are well.

Off we go with Champion and Guiré, stopping in another sort of mini-valley.  At first as we get out of the Land Cruiser, I can’t tell what we’re doing.  Then I see a shaman’s work: two rectangular designs drawn in the dust just off the road.  [We’d seen videos of such designs.]  The compartments inside the rectangles contain questions in symbols.  The shaman sprinkles peanuts over these compartments.  We note disrupted patterns in one rectangle.  When we look very closely, we can distinguish the tiny, light impressions of jackal prints on the disturbed segments.  In order to foretell the future the shaman reads the patterns of these prints.  They provide answers to the questions posed in symbols in the compartments.  Next to last night’s rectangle of compartments is a second rectangle, newly laid, and a fresh series of “questions” awaiting the jackal’s return tonight!

Champion drops us near some mud buildings.  Led by Guiré, we start along a path and three late-teen boys accost us; they want to be our guides.  With gentle Guiré, we need no other guides, but they are not to be dissuaded.  Finally, in exasperation, Fred says to Guiré, “Tell them I’ll give each of them 100 CFAs [less than a US cent] if they will go away and leave us alone!”  He does, and they do!

At that point we come, to my surprise, to the edge of a dramatic escarpment.  Moving down the path, those going home from the market make a rapid descent, past waterfall and beehive, beneath ancient burial caves.  Barefoot or with flip flops, mostly women – old and young and toting admirable head loads – tread gracefully, assuredly, from one boulder to another, descending the steep incline. 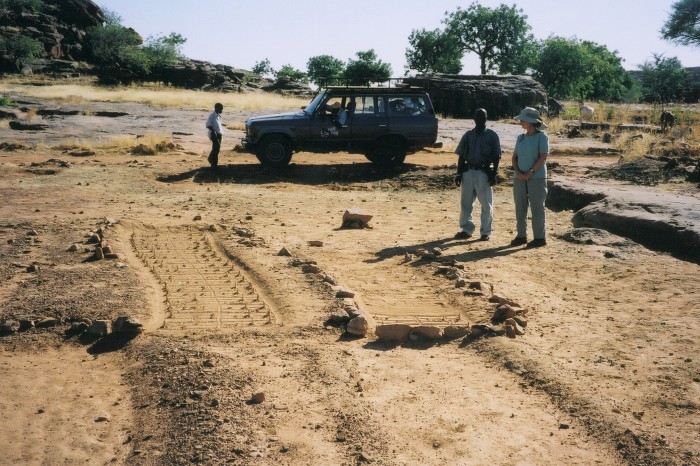 Dogon schematic for predicting the future just off the road 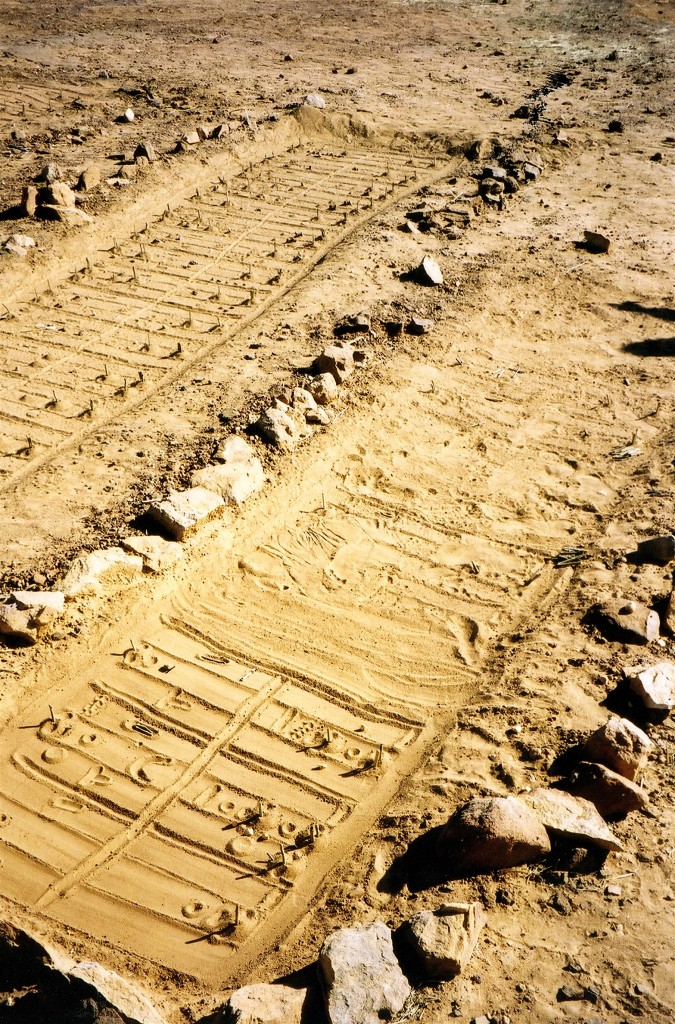 Jackal prints allow a Dogon shaman to predict the future

Wednesday night we spent at the “Campement” in Koundou in the tent erected on a second story terrace.

This encampment was very full with two tour groups.  (One of them had a roasted goat feast below us as we ate tuna and peanut butter and confiture on ry-krisp!)  Here there were crude “douches” [showers] and ”toilettes.” The douches were really nothing more than a toilette stall (without hole).  You got a bucket and water outside.

I waited in line for my turn at a bucket and a stall amongst the German/French tourists.  A German girl came along after me, but took a bucket from a tour colleague.  “Je suis le prochain, Madame,” says I, taking the bucket from her.  But nobody’s around now distributing water and the fraulein takes the plastic bucket from me and gets it half-filled with water from a three-feet high rubberized container.  With headlamp on, she drops laundry into the bucket, squirts in soap and proceeds to wash her undies.  When she’s finished, I take the bucket and look around for a place to toss the excess water.  Fraulein, horrified, pulls the bucket from me, opens the door to the now-empty douche stall and tosses the water inside.

Having finally figured out the drill, I take the bucket from her, lift the rubberized container, pour out enough water to fill my bucket and duck inside the douche stall.  Remove my boots – no socks – strip and proceed to wash my face and slap water all over myself.  When I’ve completed that, I lift the bucket and pour it over my head and body.  What heaven!  What coolth!  How wonderful it feels!  Having wiped off the water, I climb back into my clothes.  No concern about getting them wet; they’ll dry in no time here.  And it’s a pleasure to feel the coolness of wet clothes on me as I make my way back through the campement and up the forked log stair to our plein air digs.

The air did not cool as on the previous night, though there was a good breeze.   In the almost darkness, I bathed out of glasses filled with water that I’d taken from the plastic container that was delivered to us up our Y-ladder.  I was dried quickly by the desert breeze and wrapped in the old batik that has proved useful as a sheet as well.  After trying the “douche” Fred went straight to sleep, as he has each night, for which I am so grateful.  My laundry was dry in half an hour!  It took me forever to go to sleep!

During the night the breeze blows ferociously.  Cloths on the balcony flap noisily, sharply.  From where I lie in the tent, I watch Orion move from right to left and get up once to piss over the railing of the balcony onto the desert floor.