Fred and Donanne Hunter returned to Africa thirty years after leaving the continent where Fred had served as a journalist and their son was born.   One of the top priorities for the trip was to visit the Bandiagara Escarpment, home of the Dogon people who lived in a semi-traditional way, having chosen to resist the penetration of the West.

What follows is the third of several reports of their trip to Dogon Country.  There they were guided by a Dogon named Guiré and driven by a man who called himself Champion.  (Donanne writes in italics.)

Up before dawn on our penthouse terrace.  Tang in my hot tea!  Off by vehicle at 6:20 to the base of the escarpment for what turned out to be a four-hour trek.  Yougadogourou, the first village, part way up, had two pigs – the first we’ve seen – and two fantastic trees, one huge baobab and another providing “shadow and shelter.”  Watched a baby with its little sister who cuddled and kissed, rocked, teased and cradled it.  Villagers cheerfully greeted us.  Guiré is no stranger here and he’s such a delightful, quiet, gentle, careful guide.  (Those for hire in Sangha town are not at all in the same league – they’re young and seem carefree.)  Here we met a man who’d traveled to Liberia and maybe to Senegal.  He commented on the current tragic state of affairs in Liberia and Sierra Leone.

We saw men weaving in the villages today as we did at Songo on the way to the circumcision site.  Dogon women do not weave.  The old weaver at Songo spoke English; we talked about Ghana where we’d all been.  Men weave in strips and these are sewn together to make cloths.

As we continued climbing, we began to see Tellem sites above us on the cliffs.  Mesa Verde naturally comes to mind and some kiva-like shapes are similar. 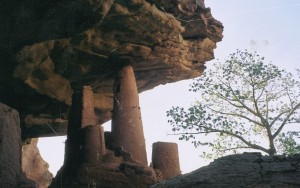 A Telem site encountered while crossing the escarpment

[Dogon claim that they arrived at the escarpment to find already-deserted Tellem sites.  They now use these “ruins” as granaries and storage areas for ritual gear.  This account makes one think of the Anasazi and their mysterious disappearance from the American Southwest.  So many travellers have commented on this parallel that Guiré knows of it.

[Despite the Dogon legends, it strikes me as much more plausible that the Dogon drove out the Tellem; many of their structures appear to be in excellent shape.  Or perhaps the Dogon intermarried with the Tellem to such an extent that they became one people.  But, of course, we will never know.]

Hiked through a narrow gorge with ancient Tellem sites above and a 1996 dam below us with busy bees buzzing.  Skirted the dam on our tiptoes.  On up the gorge – track impressively engineered with rocks – and above us weather-polished branches carefully laid.  Arriving on that level we saw that the branches cover over the gorge at the point where hikers climb a Y-ladder from a very narrow cliff edge.  So they are carefully positioned to catch falling visitors! 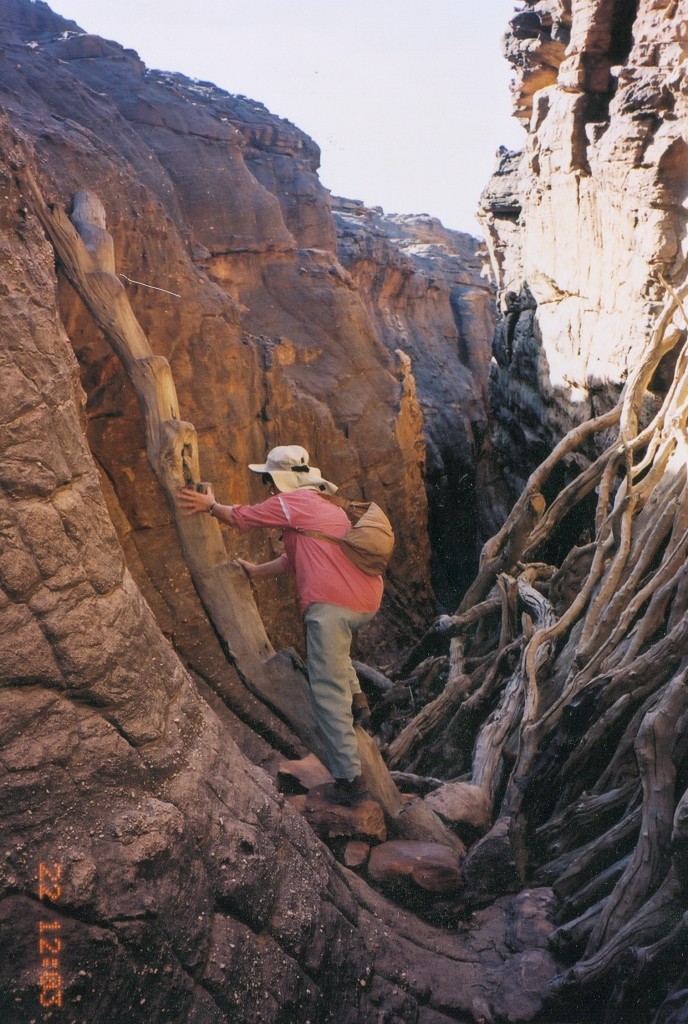 About two hours into the excursion, we arrived at the top of the escarpment overlooking all of Mali and a glorious African plain stretching to the eastern horizon.  North to other escarpments – one looking like a Fulani hat – waaay in the far, slightly dusty distance.

Walking across the top of the escarpment I say to D, “Sometimes haven’t you wondered, driving across southern Utah or northern New Mexico, what’s on top of those mesas?  Now you know.”  And what’s on top is sun-baked rock.  A kind of non-glacial “glacial polish” darkens the stone with bits of natural red color showing through.  There were also occasional rock cairns, apparently animist altars of some kind.  Guiré pointed them out to us, but carefully kept his distance from them.

We headed across the escarpment for a while, at one point coming to a deep crevasse beautifully “bridged” with broken rocks.  Without Guiré one wouldn’t know how to cross this magnificent space.  Began our descent on the other side into a delightful sort of green, tropical grotto with lovely big tree, vines and lianas and fragrant white blossoms.  Sat here looking across the plateau to the next, nearby escarpment as two French visitors and their three “carefree” Dogon guides came up the boulder path from Yougapiri.

Down the escarpment on the other side, knees feeling the stress of the downward climb.  We met Champion at about 11:00 a.m.  Seeing Champion climbing toward us, I snap a photo of him, for he’s wearing another of his remarkable suits.  He’s a real fashion plate. As I snap the photo, who comes around the trail, hiking upwards, but an elderly Dogon, carrying a huge stack of vegetable matter on his head.  Alas! I may have gotten him in the picture.  The man decides that I have purposely taken his picture – and without permission.  Or he figures there’s money in raising a fuss – which he proceeds to do.  Claiming I have offended him and his gods, he makes a racket.  I explain to Guiré what I was doing – taking a picture of Champion – but the man is not satisfied with this explanation.  He presses for payment.  I give him some CFA and we go on, Guiré a little miffed and me a little wiser.

Back to the village of Banani where we ended up yesterday after trekking down the escarpment.  At the bottom of that Tellem-cave cliff in Banani there is a surprise “botanical garden” – with lush baobabs, a lily pond, all shady and beautiful.

We’ve been here now for three hours, “resting” on the chief’s terrace.  His son has brought us cokes and Djina Jus de Pomme and we’ve had our Thanksgiving lunch of rye crisp with peanut butter and jam and a treat of Tang.  Fred, bless him, had a Cliff Bar – appropriate to our morning activity! – as dessert.  Across the dirt lane from our covered terrace perch is a – we’re not sure what .  It has the handsome carved shutters to which we’ve become accustomed, but it might be a quarry because twice there’ve been explosions, one raining sand on the mat “awning” overhead.  We were offered foam mats with blue cloth for naps but chose conversation about African vs. American values.  We had a good time.  Just the two of us except when the Chief’s son appeared to show us to the WC, to bring drinks, or just sit or stand quietly – thinking, I wonder what? 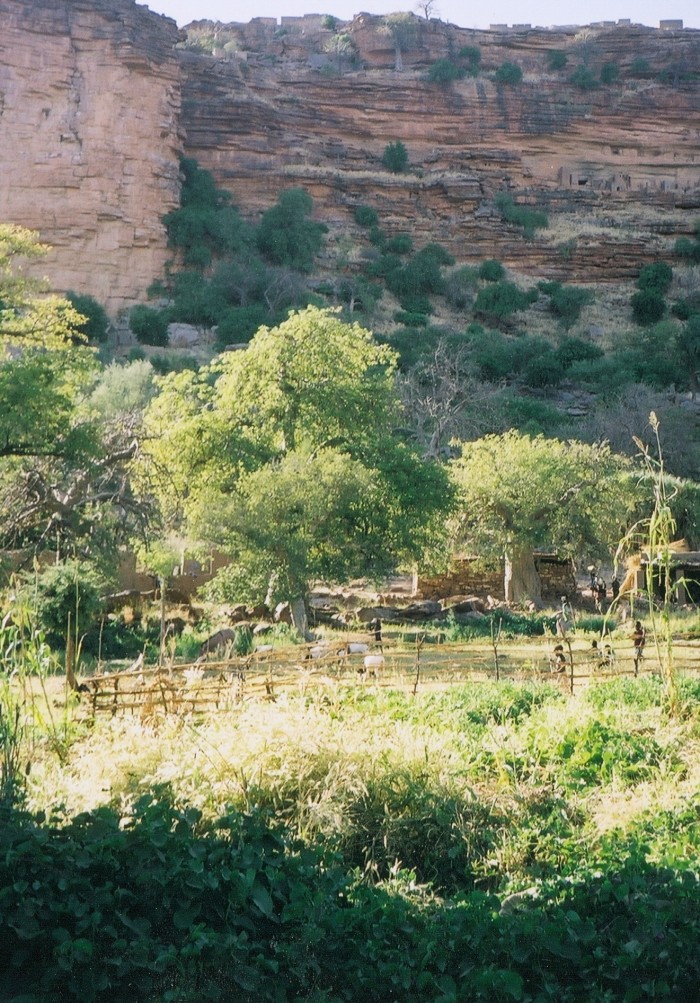 It’s almost 2:30 and we expect we’re about to be off to Tireli.  People going up the lane here, especially children, try to get our attention.  Lots of coming and going from the chief’s compound.  Mostly women with market produce in bundles or in pans on heads.  One woman has fetched water in pan-loads on her head virtually the entire time we’ve been here.  It is traditional for us to be given several hours of “rest” in the heat of the afternoon, and I’m sure Guiré and Champion are glad to have time off to visit with friends.  We’re learning to enjoy it and to SLOW DOWN.

At about 3:30 we drive along the base of the escarpment and eventually stop at a village called Tireli.  We meet the Chef du Village – who does not seem chiefly, rather quietly buffoonish with a mannerism of raising his leg while speaking to you.  Champion goes over to help some guy fix his motor-bike.  Guiré says, “Let’s walk around the village,” and we follow him, stopping a bit beyond the local pond where people gather water. (It’s neither fresh water nor well water.  Later Guiré tells us that drinking this standing water causes “guinea worm”).

Something is wrong and we don’t know what.  Is it us?  Or something that has happened the previous night?  Can it be residual annoyance with my having photographed the old Dogon and offending his gods?  I ask Guiré, “Is everything okay?”  He says, “Yes.”  But we continue to sit. 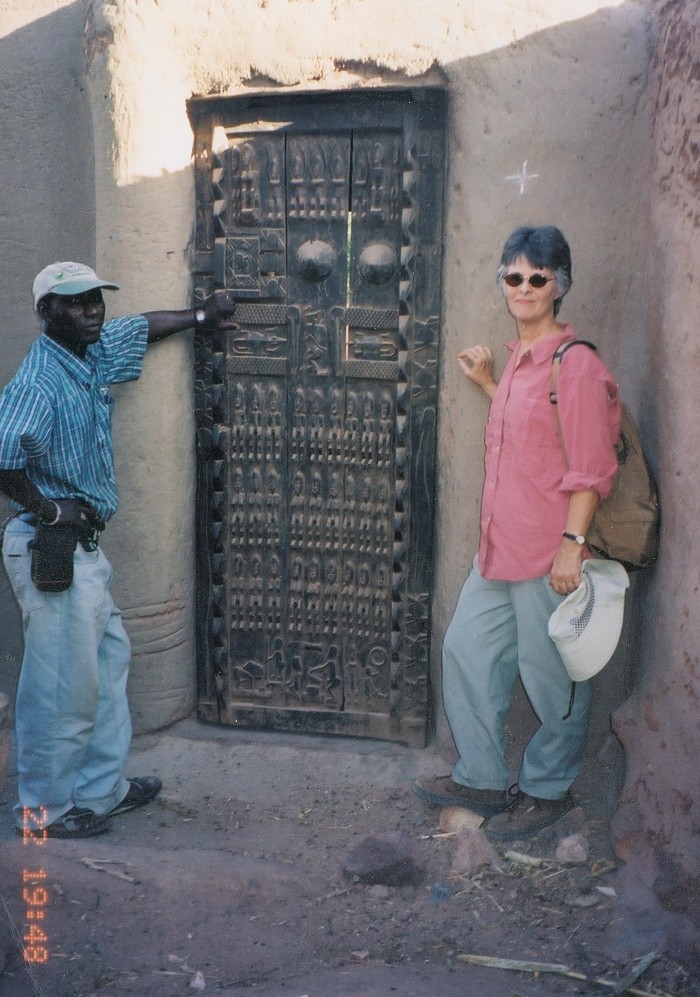 A noteworthy door in Tireli

Later we begin to move again through the village, climbing – and I’m of no particular desire to climb since we’ve already done that today.  We move around a corner and enter an earthen courtyard.  Guiré sits.  We sit.

On a metal door leading into a granary-like building on one side of the courtyard we see a number of tour company logos.  Obviously tourists come here.  Apparently Guiré has brought us to see the local féticheur. (This visit is of no particular interest to either D or me, but it is specified by The Program and so must be fulfilled.)  Nothing happens.  D and I obediently sit.  Guiré says nothing, makes no explanation of why we’re here.  D goes to an open door opposite the granary to read a bulletin.  Returning she tells Guiré that she hopes he’s okay.  He says he is.  She returns to sit beside me.  My eyes are closed.  Something happens.  I open my eyes, uncertain what I’ve heard.  D offers some t.p. to Guiré and he wipes his hands and sandals.  He’s vomited in the sand beside him.  He scuffs sand over his vomit.  We sit.  A few minutes later he rises and we leave.

We are about halfway through our trip with Guiré and Champion.  We hope very much that Guiré will be able to get on top of whatever the malady is that’s bothering him.  If he needs to stop and get help, we hope he will. 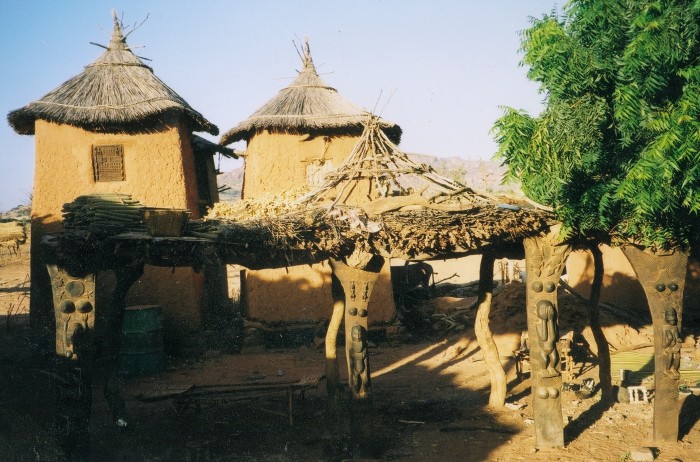