In our travels through Dogon Country with our guide Guiré and driver Champion, Donanne and Fred Hunter often asked to hear the story of how their guide Guiré had moved out of Dogon tribal life into modernity.  Here’s how:

The story began, Guiré said, in the colonial era.  At that time colonial administrators informed Dogon chiefs that they must send their sons to be educated in schools run by the French.  The chief of Gounoli, Guiré’s father’s village, did not want to lose his own sons to the white man.  Also French schools had a reputation for treating children badly, even beating them.

However, trouble with the colonialists?  The chief did not want that.    So he sought out the poorest people in the village, among them Guiré’s grandparents.  The chief ordered them to send the white man their son, Guiré’s uncle, the younger brother of his father.  The grandparents tried to buy the boy’s release, offering millet and sorghum, but to no avail.  In telling this story Guiré opens his hands and spreads his palms upwards, indicating that nothing could be done.  He explains, “When the chief commands, you must obey.”

So the younger brother was sent to school at Bandiagara about fifteen kilometers from Gounoli.  His parents brought him food and saw him during vacations.  The younger brother proved to be “brilliant.”  (In referring to his uncle, Guiré uses this word repeatedly.)  He did well at Bandiagara and went on to Bamako.  There he was trained to be an accountant.  About the time the uncle secured his diploma in accountancy, Mali became independent.  (This was September, 1960).  Modibo Keita, Mali’s first president, asked the uncle to serve as Mali’s accountant at the country’s embassy in Paris.

We heard this story twice.  The first time we were walking along the Niger shore in Ségou.  Guiré recounted gleefully that with the uncle’s success and his transfer to Paris the chief of Gounoli began to see that a white man’s education was not such a bad thing.  “The poor boy is going to Paris,” Guiré exulted.  “He knows the President of the country.”  He laughed.  “But it was too late then!  It was too late!”  The second time we heard the story was at the Gendarmerie Nationale stop in Koro at the Mali border with Burkina Faso.  I asked: Had the uncle wanted to go to Paris?  Guiré reacted with surprise.  “Of course!” he said.  “If the Mali government wants to send me to Washington as its Ambassador, I will go!  Of course, of course!” The uncle stayed in Paris until about the time Keita was overthrown in 1968.  Then he returned to Bamako.  (Guiré never specifically associates Keita’s overthrow with the uncle’s return, but a connection seems likely.)

About the time of the uncle’s return from France, Guiré was born in Gounoli, his father’s first son.  A month later a girl was born there.  Guiré’s parents contacted the girl’s parents and made marriage arrangements for the two newborns.  A black thread was put around the girl’s wrist; it signified that she and Guiré would one day be married.  As they grew up, Guiré says, the two kids’ playmates would tease them, saying, “There is your wife” and “There is your husband.”   And the two kids would insist that they did not like one another.

When Guiré was seven or eight, the uncle told Guiré’s father that Guiré must go to school.  His father could see the wisdom of this.  Schooling, after all, had benefited the uncle; probably it would benefit Guiré (and in turn the father and his family).  So Guiré was sent to school.  (When he tells this story Guiré does not speak of others from the village going to school.  One has the impression that in terms of education Guiré was unique.)

The school lay eight kilometers away from Gounoli.  Guiré walked to and from it each day.  His mother got up every morning at 4:00 a.m. to prepare food for him to take to school.  But the school did not allow him to bring food.  (Why this was so is unclear; perhaps the school administrators expected students to return home for lunch as happened in many French schools at that time.)  In any case, Guiré had to hide the lunch his mother prepared.  “I would hide it in a tree,” he told us.  “Sometimes I would go for it and find that a goat had eaten it.  Or dogs.”  The school day was from 8:00 to 12:00 with a noon break till 3:00.  Afternoon sessions went till 6:00 or 6:30.  Sometimes the schoolmaster made the boys stay late to water his garden.  Often Guiré did not start the eight-kilometer walk back home till 6:30 or 7:00 p.m.   Sometimes his father came to fetch him in a donkey cart.  (Guiré’s eyes light up at the recollections of parental support, especially the father’s fetching him.)

When Guiré finished the local school – he was twelve or thirteen – his uncle insisted that he come to Bamako.  The uncle put him into a private school and paid his school fees.  And eventually Guiré passed his baccalaureate exam.  (Guiré was circumcised at twelve, before going to Bamako.)

During his schooling in Bamako, Guiré’s father asked that he be sent back to Gounoli.  “The girl I was to marry was developing breasts,” Guiré explained.  It was time for her to marry, time for Guiré’s family to honor the commitment made to the girl’s family at the time of her birth.  The uncle objected; he insisted that Guiré must not be forced to leave off his education.  So a young man was found, a cousin within the extended family, and the girl was married to him.  Not to have honored the marriage commitment in some way, Guiré explains, would have been a grave humiliation and injustice to the girl.

Guiré pursued his education, eventually going to university in Lagos, Nigeria, where he studied public relations and learned his English.  Returning to Bamako he heard of a position in a tourist company looking for a Dogon who could also speak Bambara, Fulani, French and English.  (Five languages, wow!)  Guiré applied for the position and was accepted.

Now it was time for Guiré to think about marriage.  His uncle told him that he could marry anyone – even a white woman.  But he could not marry a Bozo or a blacksmith or a griot.  (These last two are professional groups which tend to marry inside the group.)  After starting his job he “learned of” a Dogon girl, born in Koro on the Burkina Faso border, who was studying in Bamako (though apparently not at the university level).  “So we began talking to each other,” he explained, and they were married.  Guiré acknowledged that he saw his future as requiring him to “make some economies” and go out on his own in a tourist business.  That will not be easy to do.  He has three children, the youngest a five-month old baby.

Listening to Guiré talk, I was interested in how frequently he spoke of his father, this man with two wives and thirteen children.  He never spontaneously mentioned his wife or children.  But he spoke spontaneously of his father’s need for medical assistance, of his seeing his father unexpectedly walking on a road after recovering from an illness, of writing a letter to his father and mother when he was in Sangha and getting someone to deliver it for him, of the father’s and uncle’s roles in his development.  All this was germane to what he was telling us, but it struck me as strangely father-oriented – or at least “strangely” to an American.  (One can imagine an American saying: “I had to walk ten miles every day to and from school and my kid thinks he’s put out to walk a mile.”  Because Americans tend to talk of their children rather than their parents.)  (In completing immigration forms to enter Burkina Faso we had to list our parents’ names.  And also in registering at the OK Inn in Ouagadougou.)  Does this reflect a society where (unlike ours!) the parent is deeply respected, where the elder’s word is very important?  One wonders if a Dogon’s primary affective relationship is between child and parent – rather than, for example, being between husband and wife or parent and child.  Or is it that in Dogon country a first son has a special relationship with his father?

We learned little about Champion’s life beyond the fact that he had a wife and two daughters.  In fact, we conversed with him hardly at all.  (Perhaps he did not want to overstep the boundaries with us just as we did not want to overstep them with him.  We heard that he had hit and killed a cyclist shortly before he drove for us.  He was not deemed responsible for the accident, but apparently it had affected him.  We did not ask many questions.)  It was obvious that he had a taste for clothes – and perhaps for women.  We did not call him Kassim.  But Champion and Champignon are very close.  We tried to be sure not to call him “Mushroom.” 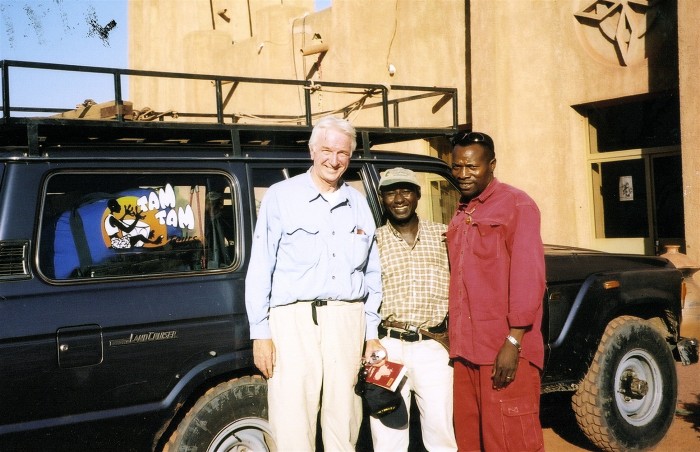 When we finally reached Burkina Faso, the road improved immediately. Although well-defined south of Koro, it had been a dirt track all the way from the escarpment.  At Burkina Faso it became a well-maintained murram road.