Fred and Donanne Hunter returned to Africa after a thirty-year absence.  When he had been a journalist based in Nairobi, he had not really looked at the Sahara.  Now he felt it was something he must do.  So Donanne went along.

As this fourth post about the Sahara begins, Donanne and I and four Land Cruisers of traveling companions have finally arrived in the Deep Sahara.  Five days into the trip which had started in Niamey, capital of Niger, we had crossed beyond the erg of Ténéré.  We were about to visit our first oasis town, a place as close to the end of the world as I ever need to be.

Moving across the erg we come upon yet another caravan, this one comprising perhaps 500 camels.  Again the stop, the examination of camels and caravaneers, the reciprocal inspection as the caravan makes its slow/fast progress down the valley toward Agadez (or wherever). These camels carry fodder, skins of water, salt cakes wrapped in woven mats, also salt mortars and food prep for the caravaneers.  This is the first time I’ve been aware of camel mouths muzzled with twine.

The Tuareg expedition leader Mohammed Ixa of Agadez is dressed debonairly this a.m.  As always, he wears a gray djellaba with matching trousers, his mustard cheche wrapped about his head, his sunglasses in place, tapping out rhythms on his Land Cruiser’s hood, rather bored with us, as most of us are caravan-watching.

Later a stop at yet another caravan, this one comparatively small.  But it is fascinating because it’s loading up for the day’s walk.  Soon it’s evident that not all camels take happily to their lot.  The first one we watch submits fairly easily and rises ready for the day’s trudge.   Then the most awful squawking begins.  It’s the next camel in line for loading – a female, maybe rather young – and she keeps screaming during the entire loading process.

Camels waiting to be loaded

The first step is to get the animal seated on its belly where it can be loaded.  But this is no simple matter.  The camel knows what’s happening and, bellowing, resists all attempts to make it kneel.  Finally a caravaneer takes a rope and hobbles the left foreleg.  Even on three feet the animal resists.  Next its forelegs are toppled.  Tail held straight out, the camel makes a triangle of its two back feet and the forelegs on which it kneels.  It keeps backing around and away.  Finally a driver grabs onto its neck – hand in its mouth? – and forces the neck backward and sideways until finally, still bellowing, the animal is forced to the ground.

Now the loading:  bags of what tour leader Phil Hassrick describes as goat or sheep dung (as a kind of buffer) go on first.  Then a couple of logs to make a saddle, then the goods: salt cakes wrapped in mats and even a mortar of salt.  The camel keeps bellowing.  Once loaded, the drivers having forced their will on the animal, it still resists.  Still bellowing, it refuses to rise and fall into line.  The drivers try to lift it, try to pull it by its neck to its feet.

With his wonderful spontaneous enthusiasm for the moment, Ixa joins the effort to raise the camel just as he’s joined the effort to load it. He gets two long poles and sticks them – from behind – under the camel’s rump and legs.  He and others try to hoist the beast into a sitting position.  But fail.  The beast goes on bellowing.  A number of other methods are employed.  Nothing works.  Finally a camel driver gets a teapot.  He pours water apparently down the beast’s nostrils and after a second attempt the animal rises.

Now it’s time for us to leave.  Ixa has been looking ready to get off but his American clients, many silently appalled at this treatment of the camel, are not yet prepared to leave.  Phil has already said that camel necks are very strong; he seems to have little sympathy for the bellowing.  As we depart, the camel we’ve been watching finally gets in line.  The next camel starts bellowing.  Apparently this is a customary reaction to the loading-up, especially for younger camels, making it a tough job. 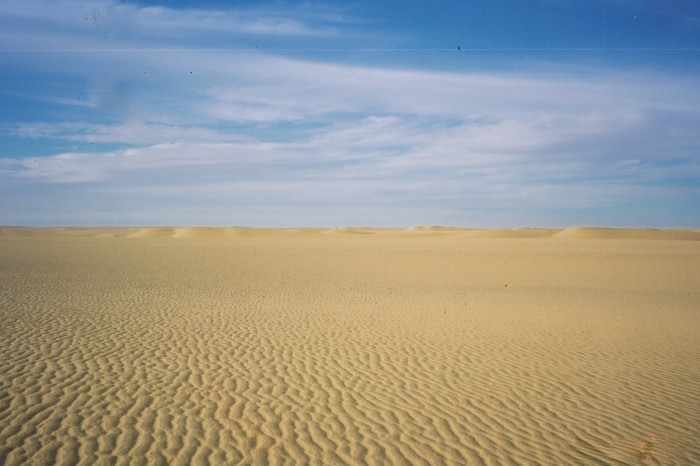 How it looks out there - in the sea of sand

We move on over flat stretches, between dunes on either side.  This morning, D & I ride in the fourth vehicle, (which fortunately gets stuck in sand less often than that of El Hadj the Toubou.)  Two of the three LCs ahead of us spew smudges of black smoke over the desert’s beige.  I wonder if this is caused by faulty engines or bad gas – and just hope the super-competent-seeming Ixa has his vehicles under control.

At a stop Dale points out to me that some dune formations strikingly resemble pyramids.  That observation makes me wonder if that’s where the pyramid shape took form in the Egyptian or Pharaonic imagination.  Hmm.

We go up and down, eventually sighting a line of cliffs, a falaise – apparently Falaise de Agram.  And finally as we come over a rise we see an oasis stretched out below the falaise: Fashi.

As we’ve moved toward the place, it’s become famous to us, not merely as an oasis, but as one that produces salt.  After all, the National Geographic has reported on the town – in a trip led by Ixa.  But I’ll happily leave it to the Foreign Legion!

We drive in and park above what must be the original heart of the place.  It’s a bedraggled bowl filled with mud huts now looking like a ruin, probably as much from wind as from heat or sun.  Les Enfants Mouches, as Phil calls them, swarm toward us.  They’re “fly-children” (or children thick as flies) with dusty faces who run to greet us, hands outstretched, calling “Cadeau!  Cadeau!” (“Gift!  Gift!”) Dennis perplexes them by greeting them enthusiastically, “Donne-moi cadeau!  Donne-moi cadeau!” (“Gimme a gift.”)  But Ralph and Bert seem delighted to greet the children and swing them to and fro by their arms.

We drive out to les salines – the salt pits.  Here salt seems to bubble up naturally in pits if water is added to them.   The salt is gathered and taken out of the pits.  Phil wants photos of the process and asks a vieux papa to get teenage girls to gather the saline substance off the tops of the pits.  (My immediate thought: “Quick!  Get some hand cream!”) 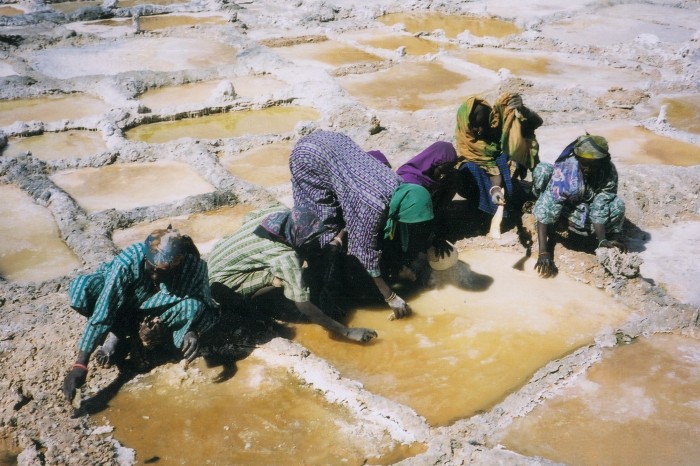 Women working in the salines of Fashi

Back up on top we watch the vieux papa and a mature woman water a salt-substance resembling cement and fill it into a bollard mold, she shoveling, he tamping down.  He levels off the top, then carries the laden mold to a nearby spot where he inverts it.  Presto!  A bollard of salt emerges.  (It’s salt for animals, not humans.)   This is the cargo we’ve seen camel caravans transporting.

A brief discussion with the old man and the woman about life in Fashi.   Being deep in the Sahara does not prevent it from being under threat.   Fashi, it’s explained, is a smaller place than Bilma, another oasis with salines 170 kms east-northeast.   Moreover, Fashi’s salt is inferior to that of Bilma.  So are the dates grown on its palms.  But the real threat is talk of salt caravans disappearing within ten years, the trade to be replaced by trucks.  Or perhaps the salt trade will altogether disappear.  The processes we watched are a very inefficient way to make salt, prepare it for market and get it there.  Already the papa’s yearly income has diminished from CFA 100,000 to half that – somewhere between $65 and $75 per year.  We could not help wondering: What will happen to these folks?

A nice moment when Phil leaves the salines.  He thanks the vieux with respect for giving the explanation of his lifeways.  He taps lightly on the head of a kid and smiles at him when he looks up.  (And I think of Phil’s saying, and Ralph’s repeating, that he’s moved around – from Indonesia back to the States, from Boulder where Barbara’s Lost Frontiers business was to the Bay Area – in order to be near his kids.)  He gives a nice handshake to the woman who shoveled the salt and makes a gesture to the heart.  Phil often seems very much a white hunter/tour leader type so it’s nice to see these more sensitive moments. 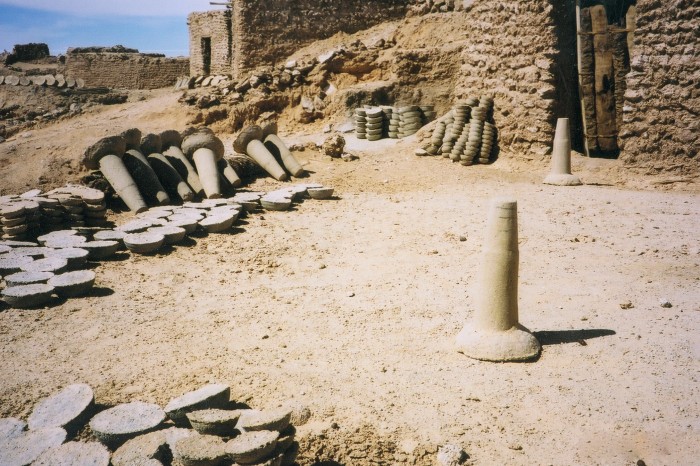 “Bollards” and platters of salt to be transported by camel caravans

A long afternoon of the pleasures and challenges of sand.  Sometimes in the vastness of the landscapes our vehicles look like kiddie cars racing across the dunes, up and sometimes over sand hills.  And sometimes down very steep drops on the other side.  The “test” for them today was up over a sand ridge, then down and immediately up over again and down a second very steep grade.  Vehicles got stuck making the first grade.  Sand-digging.  A lot of us pushing.  Once they made it up the grade, they swooped down the other side only to get stuck again on the up grade.  Finally overcoming it, they swept over the second rise as if it were a launching pad.  One flew out over the down slope with lots of “air” between it and the slope.  Phil lamented not getting the photo, but it would have been tricky indeed to capture.

After the end of this dune-buckarooing Phil confides to D and me that Ixa seems something of a “camel cowboy.”  He originally appeared so dignified, competent and desirous of making a good impression, especially upon Phil, who can bring him more work.  Now that we know each other better he shows a more relaxed manner.  Ixa’s a practiced and practical charmer both of tourists and women, something of the opportunist (why not?) and also a dune buckaroo.  (Hmm.  Perhaps the dune-jockeying is as much to please the other Tuaregs as for us.)

I begin to wish – as do others – that the dune-buckarooing could be brought sufficiently under control so that we stop early enough to set up camp in daylight and enjoy the magnificent sunsets.  But no!  Ixa keeps passing up likely camp spots in order to push on to more improbable or more scenic sites.  This means that we invariably erect our tents as the sun is setting – or after it has set.  And so we miss the sunset and those few moments before nightfall when we could catch our breath.  We wish Phil could rein in the “camel cowboy,” but, since they do not know each other well, he seems unable or unwilling to do so. 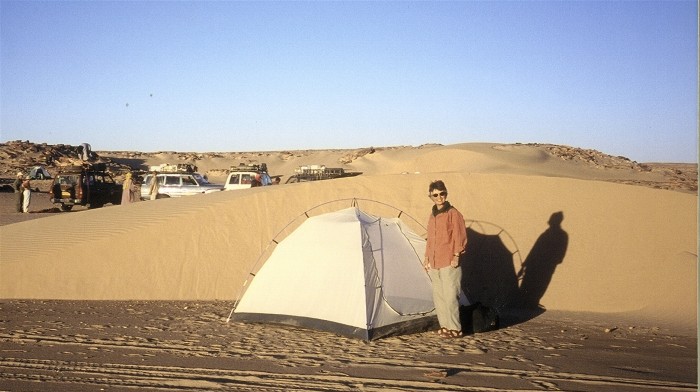