Fred and Donanne Hunter returned to Africa after a thirty-year absence.  When he had been a journalist based in Nairobi, he had not really looked at the Sahara.  Now he felt it was something he really must do.  So Donanne went along.  This is the third post about the Sahara trip.

Mohammed Ixa, the charismatic Tuareg to whom we had entrusted our destiny, goes barefoot around camp, warming his toes at the fire as he reclines and gracefully hosts our evening meals.  He dishes out the food Issouf has prepared.  It is brought from the cooking fire by Agali, our expedition mechanic.

Our meals.  For breakfast and dinner we always sat (or in the evening lay) on thick foam mattresses of the same kind that Tidene provided for our sleeping.  The mattresses were set out in a rectangle.  At breakfast various items were set inside the rectangle: pots of tea and cups for drinking, bottles of water, slices of bread, jars of jams and peanut butter, various dry cereals which could be eaten by mixing water and powdered milk in a bowl and pouring cereal on top of it.  As noted above, lunch generally consisted of a large tray of vegetables – beets, carrots, cabbage, potatoes, etc. – eaten as salad and garnished with a delightful sauce.

Before dinner Phil serves wine brought in milk carton containers.  For those of us, like Donanne and me, who do not take wine, there is only water to drink.  Dinner invariably begins with broth or a light soup, ladled out by Ixa who enjoys presiding at these repasts.  He also dishes out servings of the entrée, generally a starch – couscous, noodles, spaghetti – garnished by meat or stew.  Dessert consists of fruit, sometimes canned, sometimes slices of fresh oranges.  The fare was filling, if not fabulous.  Often the conversation was both. 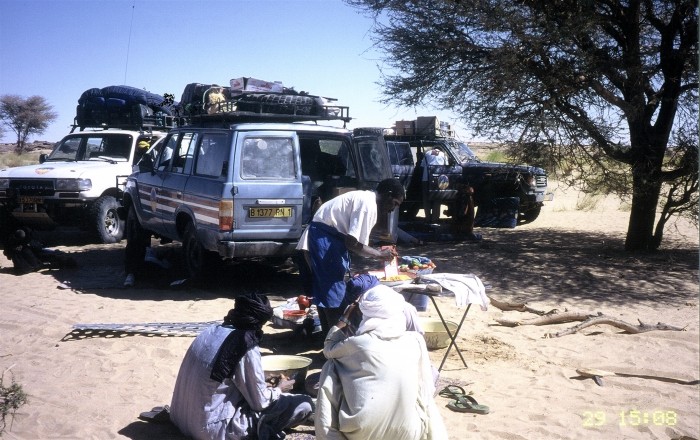 Lunch being prepared by Issouf, Agali and Husseini

Off early after breakfast we drove through stretches of rock and sand, flat, broken up, following caravan tracks made by years of camel pads hitting the same routes.  The track looks made by some machine, it is so careful and exact.  About 10:00 we crossed out of not-the-Sahara into the Erg de Ténéré.  Suddenly we entered a wide space of nothing but clean, light beige sand rising and falling like a rolling sea and seeming to stretch to the horizons.  Starting across that landscape: what an experience!  The dunes undulated in their wonderfully voluptuous shapes.  In the flats between them lay sand crusted by rain that fell who-knows-when and dried there.  Little tufts of sand poked up, a mere three or four inches high, probably sand-blown against the spikey, dessicated erg grass.

Saw a couple of fawn-colored fennec foxes.  The first was running mostly behind a dune, its large ears and tail visible.  When Ixa gave chase, I realized the truth of the contention that desert species are endangered by drivers who run the creatures to exhaustion.  Finally we crossed behind the fox’s path and then saw its mate in its burrow.  Phil reported foxes howling in the night. 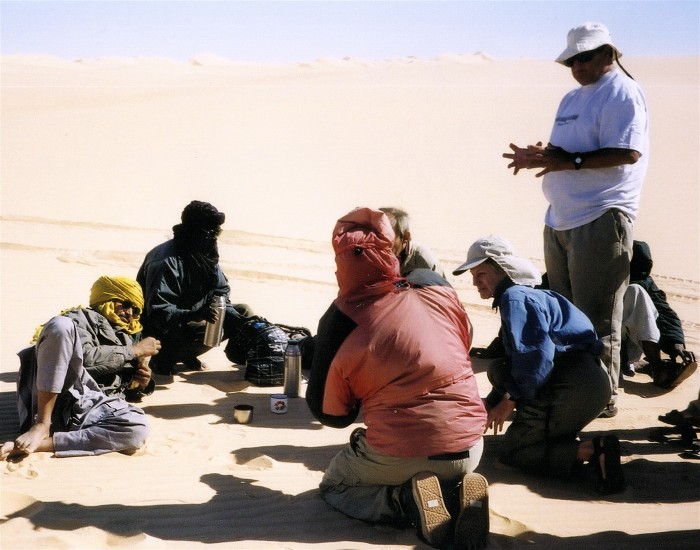 Morning coffee break. A barefoot Ixa reclines at the left.

After a stop at the top of what Ixa calls, “Coffee Break Dune” we drove alone across this great expanse.  Then we saw vehicles ahead.  What?  We’re not alone out here?  We hurry to overtake the vehicles and get stuck in the sand.  Our other vehicles stop nearby and the Tuareg employees race over to disembowel Ixa from the sand using “sand ladders” attached to the land cruiser.  It takes several attempts but we make it.  Overtaking the three vehicles parked at a dune, we discover they’re from an outfit called Les Ecoles du Désert.  People leave our vehicles and greet each other, the locals with enthusiasm (Ixa’s Toubou driver is wrestled by two blacks with Ecoles du Désert), the whites with more reserve.  The EDD people will bring 70 kids from all over France to Agadez at Christmas.  This is as far out of town as they’ll go.  At least they’ll see some real desert. 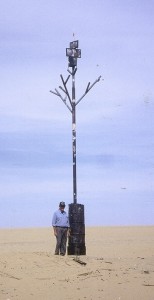 A stop at a well marked by the Arbre de Ténéré. The arbre itself seems to be a cross between a famous Nigerien landmark and a sick joke.  On my Michelin map its location is noted in these words: “Arbre de Ténéré (Monument)  Very bad water at 40 meters.”  For many years apparently an actual tree (arbre) mysteriously sustained itself near the well.  At some point, so goes the story, a drunken Libyan truck driver, motivated by unexplained hostility, crashed into the tree, destroying it.  Among our group it’s said that bits of the tree are on display in a Niamey museum.  A tasteless sculpture, donated by Japanese and suggesting a tree (at least to those who don’t like trees), now stands near the well.  Sad commentary. A monument to man’s destructiveness.

After lunch under a canopy of UNHCR canvas we almost immediately encountered a caravan of some 120 camels.  We drove directly toward them, fascinated to see such unusual beings.  Three young caravaneers came running to look at us, fascinated to see such unusual beings.  Ixa – we were traveling in his truck with Ralph – just turned off the motor and let the tourists enjoy the sights.

Ixa’s amazingly easy about touch.  When we met the people from the Ecoles de Désert, he warmly greeted another Tuareg, a man of similar dignity and self-confidence.  They talked with hands joined, even fingers interlaced.  When Ralph’s taking too much time photographing, Ixa wraps his arms around him and pulls him to the truck.  When the three young (presumably Tuareg) caravaneers came to us, Ixa spoke with one while sitting in the truck.  The caravaneer held onto the outside mirror and Ixa absentmindedly fiddled with the guy’s finger. 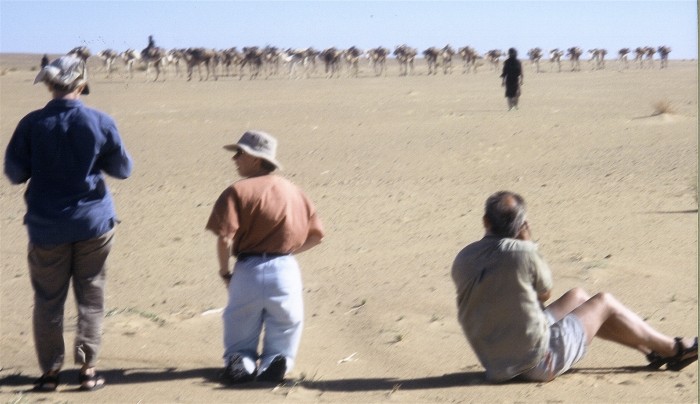 Preparing to greet an approaching caravan of salt-bearing camels

Watching a caravan is an amazing experience.  Seen from a distance, the long line of camels hardly seems to be moving.  The pace – from a distance – seems slow, stately, and even a hundred animals look meager in the vastness of the landscape.  When they’re closer, you see that although they’re walking with a kind of majestic grace, unhurried, one foot plodding before the other, they’re moving right along.  If the rope that leads it is dropped, the camel simply stops walking.  It waits until the rope is again pulled, either by a caravaneer or by the preceding camel to which the line has been re-attached.

Moving along, we passed no pollution – except an occasional tire, a piste-marker, cast into the sand.  (“That must be a Firestone,” said Ralph, referring to the recent bad-tire problems much in the news.)  But we encountered many camel bones, now whitened by the sun in mounds formed by carcasses.  Ixa said that when a camel goes lame or is sick and can’t keep up, it’s killed (he figuratively slit his throat), eaten by the caravaneers and the carcass left along the route.

Camels walk from maybe 8:00 a.m. to 11:00 p.m.  Whether or not there’s a break I don’t know – probably not.  Camels take water once every seven to ten days.  They are unpacked every night (packing a huge caravan must be a job!) and we’ve seen occasional fodder left at campsites.  There seems to be one caravaneer for about ten camels.

Riding across the erg is like sitting on a cruise ship, watching the undulating ocean pass by.  A beige, quite seductive ocean.  As we came along, up a kind of valley between low-lying dunes, the ones off to the right looked like miles-long lines of dolphins following one after the other in a kind of caravan formation.  While driving, it’s impossible to focus on the patterns of the sand nearby (unless you do a strange kind of photo-filing with your eyes).  The nearby sand becomes a blur or a cloud bank.  You can only see well beyond it.  Hard for a driver, I should think, to know where to go, how to miss deep sand.  The Toubou driver has had continuing problems getting stuck in sand. 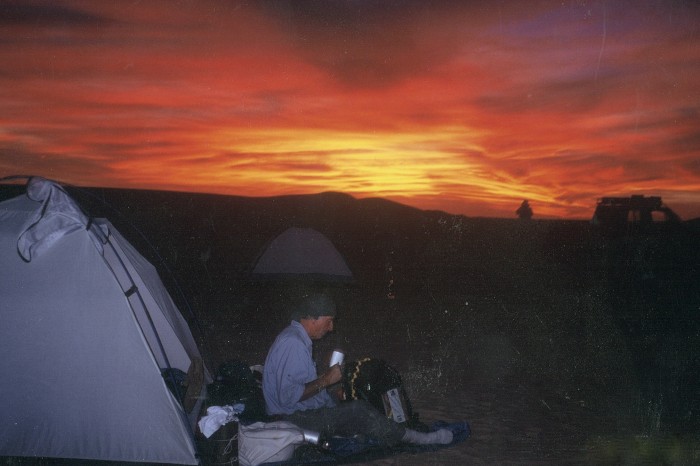 We traveled all afternoon under a light, almost transparent layer of clouds.  These cut the heat of the sun but also shortened the day.  Camped at what I called “Sunset Camp.”  Well into the Erg de Ténéré about 70 kms from Fashi, so figured Barbara and Dale who were keeping track of our position with Dale’s Global Positioning System device.  As we made camp, the sunset threw glowing red light against the clouds.  Glorious!  We’re in the real Sahara at last!