Fred and Donanne Hunter returned to Africa after a thirty-year absence.  When he had been a journalist based in Nairobi, he had not really looked at the Sahara.  Now he felt he must.  So Donanne went along.

We were about to enter the Sahara: Four Toyota Land Cruisers.  We left Agadez around 2:00.  The lead LC was white (in the same tradition that gave the Lone Ranger and other cowboy heroes white steeds) appropriately driven by Mohammed Ixa himself.  A second LC was chauffeured by Husseini, another Tuareg, and a third by El Hadj, a Toubou, whose contacts would be useful in Toubou country.  In the final car were three Tuaregs: the driver; Issouf, the cook (who had learned his skills from a French woman for whom he served as apprentice cook) and Agali, a skilled mechanic formerly employed in Agadez by the Toyota dealership and a fighter in the Tuareg rebellion of the early 1990s.  Donanne and I rode with these men, deciding not to enmesh ourselves in a competition for Land Cruiser seats.  That kind of competition sometimes mars group travel.  When Donanne led tours, she generally saw to it that all guests had a chance at the best seats.  [In fact, this kind of competition never materialized on the trip; we regularly traded off seats.  No one rode regularly in any one car.]

Heading out of Agadez, we passed huge trucks loading up for trans-Saharan passage to Libya à l’africaine (which means people and baggage hanging off cargo).  Saw another arriving, people and baggage very dusty.  En route a stop for Dennis and Jim to photo caravanserai along roadside, to watch a caravan from Bilma headed to Nigeria, to see rock art near where we camped. 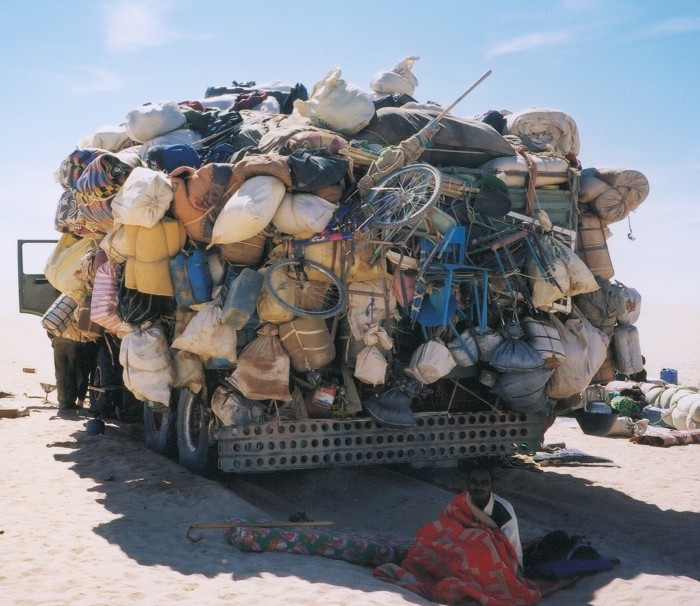 Non-tourist passage across the desert

We came upon a herd of donkeys, some 80-100 of them.  Very dark-skinned Tuareg teenagers were watering the herd from what seemed merely a deep hole in the ground.  Over it was erected a makeshift, but sturdy scaffolding of tree branches.  To this the teens had mounted their own tackle and threaded through it a very long rope made partly out of a rubber inner tube.  Their bucket was floppy, maybe also from a truck’s inner tube.  Instead of pulling up the rope themselves, they tied it to a pair of donkeys and let them do the pulling.  Once the water-filled bucket was raised, a young man and woman shouldered it between them, walked it to a circular trough, emptied the water into it and let the donkeys drink. 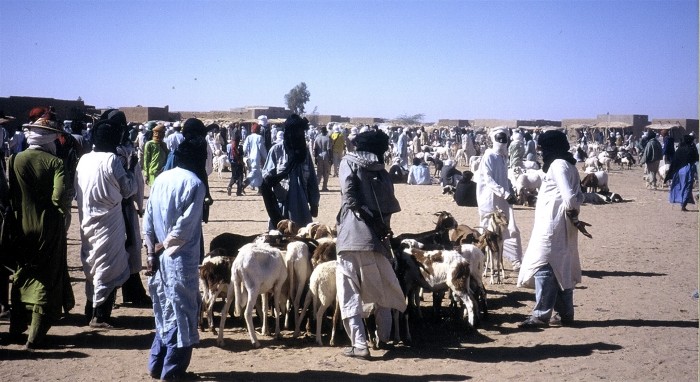 Mohammed drove the lead LC right up to the donkeys and stopped.  The other drivers followed his lead and we all got out.  We stood around watching the watering and photographing it – without realizing that we were participating in what came to seem to us a desert tradition: staring at people going on about their daily routines.

It was not only the tourists who stared.  When camel caravans drew near to us, several caravaneers would invariably hurry off from the camels’ line of march to look us over.  When we came upon disabled trucks, passengers sitting around the desert floor rose and hurried to ogle us – just as we were ogling them.  While this behavior would have provoked annoyance or animosity in cities, in the expanse of the desert it gave no offense.

Many people have the understandable impression that the Sahara is a vastness of sand dunes and pebbly flatness.  In fact, rock outcroppings dot the landscape as do occasional oases.  Ancient man chipped pictures onto some of these rock surfaces and they represent what ancient man saw – and was impressed by – around him: giraffes, elephants.  The rock art offers undeniable evidence that thousands of years ago the Sahara was grassland, not desert.  It was a savanna inhabited by some of the same animals one sees in East Africa today.  An intriguing mystery of the desert is how it came to be what it is. 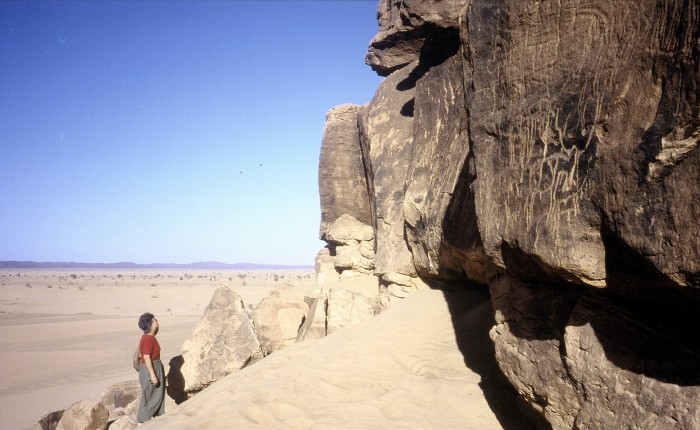 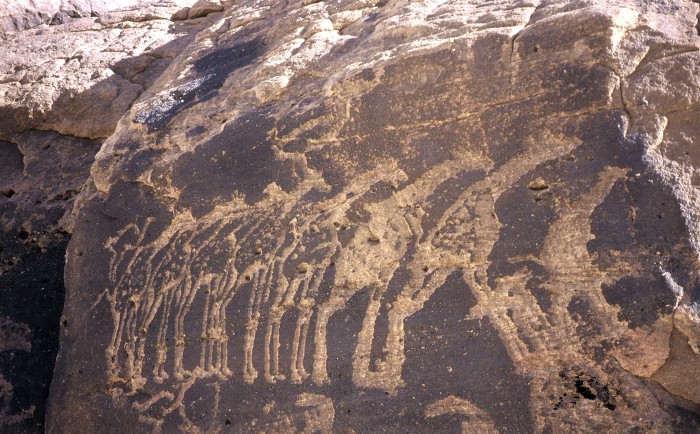 What Donanne was observing: giraffes in the Sahara

Camping in virtually a treeless section of small sand dunes and rock outcroppings.  A day mostly of driving.  Although the present terrain is treeless and the ground sand, Ixa says we have not yet reached the Sahara.  But we must be pretty close.  The only notable stop today was at a vestigial ring of petrified logs set in a circle in a series of such rings.  A Saharan Stonehenge.  We had passed a couple of camel caravans and a place – amongst bushes, tall and green – where camels were being loaded for the day’s journey.  At our stop three young men appeared and came to greet us.

I’m astonished at the number of people wandering around this desolate environment.  We passed more Mercedes trucks, absolutely packed to seemingly twice their height.  At a stop for selling water there were six trucks parked with their human cargo sprawled out on the plain, some sitting on mattresses, others sleeping heedless of the sand and worse the desert.  At one point – after having passed a lone rider with camel (who raced the LC for a short distance) – we came upon a solitary figure standing on a rise.  As we came abreast of the figure, he proved to be an African, seemingly unconcerned about his situation.  He pointed down the road to a disabled Mercedes truck with its human and commercial cargo spread out all around.  He assured Ixa that help of some kind was coming from Agadez, their destination.  You marvel at the patience and risks taken in some lives!  How long they’ll have to wait no one knows, but the man gave no evidence of panic. 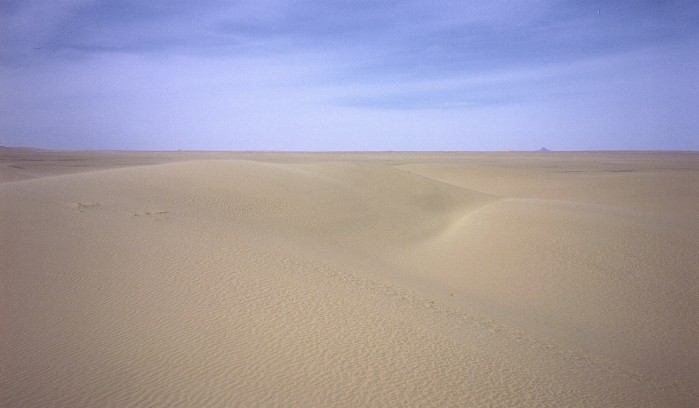 Would you want your vehicle to break down in a place like this?

Lunch – mainly vegetables – near an encampment of herders, donkeys, sheep, goats, even some camels.  Ixa said they would stay there till the water gave out.  Women and children came over to greet our group and stayed for a while for them to look at us and for us to look at them.

At Phil’s invitation (he said he had not gotten to know us on the flight from USA as he had the others) we rode today with him and Mohammed in the lead LC.  Ixa had a tiny toy bear given him by a German-Swiss couple; it hung from the rearview mirror, canted so that it looks away from the driver.  “If I don’t say hello,” said Ixa, “he doesn’t look at me.” Ixa hummed to himself as he drove.  Often he leaned outside his vehicle to whoop as we drove over the tops of dunes.   A favorite whoop is “Barrr-ba-ra!” cried in honor of the tour’s single woman.

Ixa was dressed in a fresh gray Tuareg suit – long tunic and matching trousers – with a distinctive mustard yellow scarf around his head as a turban.  Dark glasses.  Mustache.  Presence.  Dignity.  Competence.  The undoubted leader of the expedition – with a ready sense of irony and humor.  He and Phil set each other off well.  But they have not worked together before and do not really know each other, a risky proposition for a tour leader, as D well knows.  Phil was riding with Mohammed just as with us: to get to know him.

Riding over expanses of hard-packed sand, we conversed in a mixture of English and French.  (Ixa said he speaks “small-small” English.)  Phil commented something to Ixa about Americans being cannibals.  That led D to share her Foreign Service mother’s observation about the confusions that canned foods can cause.  Cans of peas show pictures of peas.  Everyone in the world understands that you open the can and eat peas.  So what do non-Americans think when they see cans of baby food?  They have pictures of babies on them.

How it looks out there.

This starts Mohammed off on a spate of story-telling in French.

His first story:  An African diplomat and his family are assigned to work in America.  Excited, the diplomat goes to a large store.  There he finds an unfamiliar product, one which will serve him well in this new country.  It’s a product that, if rubbed on in the shower, will change one’s skin to white.  The diplomat buys four packets: one for himself, a second for his wife, and two for his children.  At home, he takes a shower and has white skin immediately.  He’s delighted.  His wife comes home, sees him.  She’s astonished, overjoyed.  He tells her the good news and she showers using the product.  Her skin becomes white.  They dance exultantly.  When the children come home, they see what’s happened and are appalled.  The parents try to get them to take their showers, but they refuse.  The wife turns to the husband and says: “What have you done? Already we’re having trouble with the Africans!”

Mohammed’s third story: An American, a European and an African have their mental agility tested.  They’re given two ball bearings and put in an empty room to see what they do.  The American tries to balance the ball bearings on top of each other, but he fails and leaves the room.  The European tries to devise a game by rolling the ball bearings against the wall, but there’s no adversary for his game.  He quickly abandons it and leaves the room.  The African enters.  Hardly has he shut the door than he begins pounding on it.  When the others open the door, he complains: “I’ve broken one ball bearing and lost the other!”

Ixa says: “Tourists are crazy.  They pay to look around the Sahara when they know there’s nothing to see. “

TRAVELS IN AFRICA: Preparing for the Sahara, 2000