TRAVELS IN AFRICA: Preparing for the Sahara, 2000

Fred and Donanne Hunter returned to Africa after a thirty-year absence.  When he had been a journalist based in Nairobi, he had not really looked at the Sahara.  Now he felt it was something he really must do.  So Donanne went along.  This is the first of a series of posts about the Sahara.

Some folks are just plain stupid.  That may best explain my not quite rational desire to plunge deep into the Sahara.  When I served as a journalist covering Africa for The Christian Science Monitor, I wanted to do a series about crossing the Sahara.  But it never came about.  Not too surprisingly.  There are 54 countries in Africa; during four years of journalist wanderings I reported from no more than half of them.

Now that it was 30 years later and I was retired, maybe I could finally take a look at the Sahara – with an intrepid companion, my wife Donanne who was always up for travel.

After some calling around, we found that Lost Frontiers, a two-person adventure travel company in Fairfax, California, had a trip going into the Sahara.  The group would rendezvous in Niamey, the capital of Niger, zip up to Agadez, then plunge into the desert.  The trip was going late in the year.  The weather would be cool then – at least as cool as it ever got – and camel caravans would be operating.  So we signed on.

Were we insane?  We thought not.  Our friends were not so sure; they all seemed to have heard of people dying in the desert.  Of course, we wondered – even worried – about how things would be.  Were we too much accustomed to luxury travel?  Donanne owned a small special interest tour company that ran upscale tours, every detail attended to, for entities like the Smithsonian and the National Trust for Historic Preservation.  Would we find “adventure travel” too much for us?  There was only one way to find out.

Was camping among sand dunes a good idea?  We had not even camped when we’d wandered around Africa in our youth.   Would the trip be arduous?  Would the food be edible?  How would we go to the bathroom? No bushes!  No logs! As if we were children about to set off for the first time for kindergarten, this was the problem that fretted us most.  Donanne bought a portable toilet with a “durable plastic molded seat” and “heavy duty tubular steel legs.”  It folded up compactly, fit in the bottom of her duffel and served her well.  The only time I tried it, it sank into the sand. 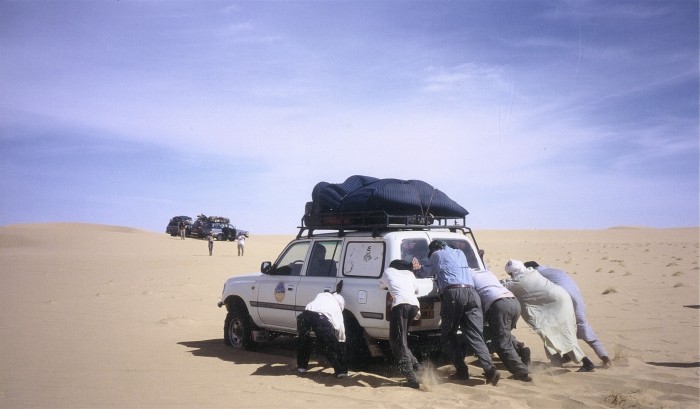 When you're stuck in the Sahara, everyone pushes.

Donanne will speak for herself in italics:

I contacted people who’d been on similar Sahara expeditions and asked them (1) what they’d taken and couldn’t have done without, (2) what they should have taken but didn’t and (3) what they’d taken but didn’t use.  Asked the same questions I’d reply:  (1) a good quality down mummy bag for the cold nights.  An ample supply of toilet paper – with matches. (Bics don’t always light.)  A long silk scarf to use as a head and face protector against the wind.  An old ankle-length silk skirt with buttons up the front to use as a “shower curtain”.  Sun hat.  Curiosity.  Dark glasses.  Hand sanitizer.  Tevas.  Flexibility.   Flashlight.   Toothbrush.  Sense of humor.  Porta potty!  (2) flavor capsules to add variety to our drinking water.  (3) compact inflatable mattresses.

I visited the dentist who capped a tooth that threatened to break.  (I’d had that happen in Santa Barbara and did not want to contend with it in the Sahara!)  We got the necessary shots. We got visas.  We bought “bonding base formula sun block” and insect repellent.

At last we were ready for the Sahara!

Traveling with Guiré and Champion, our guide and driver, engaged in Bamako, Mali, we reached Niamey by early afternoon and finally found the Grand Hotel on its marvellous bluff overlooking a bend in the Niger.  Marvellous location, yes, but the hotel itself?  I could hardly believe what we saw.  A reconstruction project in process.  Scaffolding blocked off the front of the hotel.  Where the hell was a guest supposed to enter?

Running around the side of the building, I passed the swimming pool terrace where several Europeans sunned.  I charged into the spacious lobby.   I inquired about our reservations as Donanne and the guys trudged in, carrying our luggage.   D and I climbed two flights of stairs to a hallway.  The right side of the building was under reconstruction.  We found our room on the left side, dropped our luggage, made a stop and returned to the lobby to be sure that Guiré and Champion were properly fed, tipped and thanked before we said goodbye.

But it turned out to be the first day of Ramadan, the Muslim holy month.  During that month Muslims fast from dawn to dusk.  There was nothing to eat.  It was not even clear that the hotel possessed a dining room.  Or that we could even get drinks; the bar by the pool was closed.  The guys insisted they did not want food.  I had not thought of them as observant Muslims.  Certainly we had seen no efforts to pray five times a day.  They seemed eager to race back to Bamako and left us with their wallets full, but their bellies empty.

At the reception desk I reported that our room with its peeling paint and broken toilet seat was not acceptable.  We found a second room in the same condition.  I recalled that when I phoned Lost Frontiers, the fellow who answered the call – both principals were out on trips – told me, “Phil does not waste money on first class hotels.”  He certainly had not in Niamey.  By now we had discovered the locked dining room.  Through its glass doors we could see the littered remains of a meal – spilled glasses and plates, tableware and tablecloths – which no one had bothered to clean up.  I wondered what awaited us in the Sahara.

Late the following evening we met the other trip members.  It was night now, balmy.  We could eat.  Tour leader Phil Hassrick ordered us dinners marginally better than the brochettes we had eaten the previous evening on the hotel terrace after watching the sun slouch across the Niger River and sink below the horizon somewhere in Nigeria.

People were tired after the flight from Paris.  We looked each other over, but hardly conversed.  But it was clear even then that this would be a good group.  Phil had lived for a dozen years in Kenya, first as a Peace Corps volunteer, later as a Unicef officer.  Denby from Honolulu, a practicing broadcast journalist, had learned her profession as a neophyte foreign correspondent in Vietnam.  Her husband Bob who had reported for both CBS and NBC, now wrote a column for a Honolulu paper and led tours to destinations in China and South East Asia.  Barbara was an attorney from a prestigious law firm in St. Louis.  Bert, who had traveled with Barbara on other Lost Frontiers trips, and Dale were both software designers, Bert from Cambridge, Massachusetts, and Dale from the Bay Area. The multi-talented Dennis was a composer, linguist and amateur anthropologist who had led 80 trips to Greenland.  He was slated to lead upcoming trips to the Sahara.  Jim who had been a Marine and a counselor of troubled young people was married to a woman, a railroad buff, who refused to travel anywhere hot.   She was presently riding trains in England.  In top physical condition, Jim quickly proclaimed himself the oldest member of the expedition at 71.

Everyone had done a good deal of traveling.  All except the youngsters Barbara and Bert were 50 or older.  We were what became of Peace Corps types thirty years after their service.

What follows are edited day-to-day logs of the trip.

In advising us to get good rest, Phil said he had hoped that we could fly to Agadez, one of the great trade entrepôts on the southern margins of the Sahara.  But it turned out we were going to drive.  It would be a 14-hour trip.  Our backsides would remember the trip when we got there.

We left Niamey before sunup, about 6:00 a.m.  D and I were in the Land Cruiser driven by the handsome Tuareg Limon, complete with mustache, blue robe and cheche, the long scarf, around his neck.  Jim, the physical culturist, sat with him in the front seat.  Phil, D (in middle seat) and I were in the rear, rather cramped over those hours.  Several stops, notably at Birni-Nkonni, on the Nigerian border, north of Sokoto.  There we stopped for almost two hours to right carburetor problems with the other car.  Limon made the drivers empty out our luggage and retrieve gas cans, then sent them off to get contraband Nigerian gasoline (about 2/3s the local price) from vendors across the border.  We ate a lunch provided by Limon.  I’d been having tetchy tummy problems, but ate a little. Carburetor problems forced another stop; passengers had to double-up.  Jim rode in the rear of a car, Bert with D and me, Barbara and Dennis with driver Limon.   We finally arrived at a mud-hut hotel, the Tidene – quite charming in its way – at 8:30 p.m. 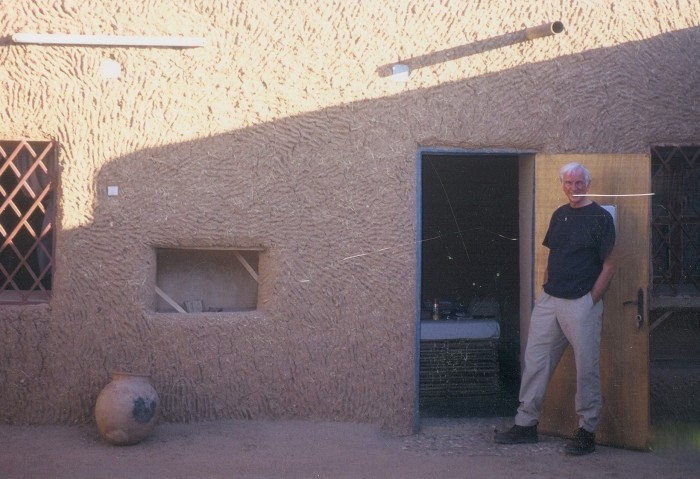 Here we met another addition to the group: Ralph, an old friend of Phil’s from Nairobi. He had also spent a dozen years in Kenya, most of them – and many years later in New York and Washington – in the travel business.

As we ate dinner at the Tidene dining room, a Tuareg entered.  But not just any Tuareg.  This man had presence.  He carried himself with dignity.  He exuded competency, reliability and a touch of mystery. While we sat around radiating accessible American openness, he had brought with him a place to hide: the traditional Tuareg cheche. Around his neck and covering his head he wore it, the long scarf that can be pulled over mouth and nose when sand is blowing.  He also brought the Berber darkness of complexion; it seemed so much more interesting than our paleness.  This was Mohammed Ixa, owner of Tidene Tours (and of the hotel), a non-pareil Sahara guide who had taken writer/photographers from the National Geographic to some of the same places we would see.  He knew the desert as well as we knew the streets around our suburban homes.

Day started with a walking tour of Agadez.  Of special interest to me was poking my head into the house occupied in 1850 by the first true European scholar/traveler in West Africa, Heinrich Barth.  Also – from scholarly to glitzy – the  house director Bernardo Bertolucci built for his film adaptation of Paul Bowles’ “The Sheltering Sky.”  Then to the palace of the Sultan of Agadez (shoes off when entering!) where the Sultan spoke briefly about his recent trip to US: Phoenix, Santa Fe, Washington.  Somehow strange to think of the Sultan a tourist in USA while not strange for us to be tourists in Niger.  Go figure. 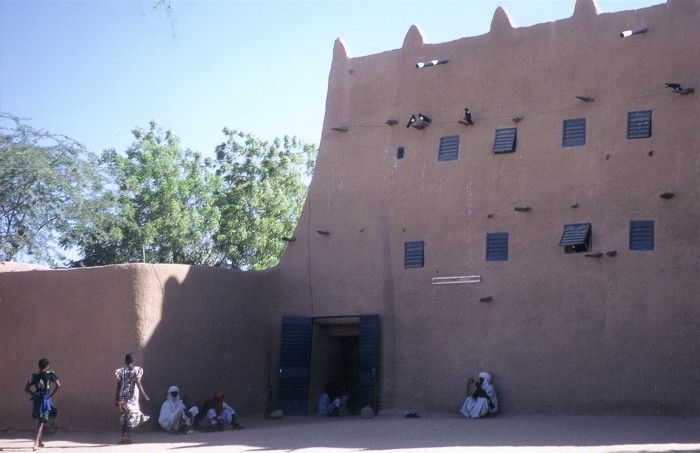 The sultan's palace in Agadez where the sultan gave us audience