After almost 30 years Donanne and I were returning to South Africa.  Why?  Because we wanted our son Paul who would be joining us to see the great animals of Africa before professional life made that impossible.

We also wanted to see how much had changed in our absence.  The photograph below gives some hints of this.  Earlier, as a journalist, it had been fun to visit an ostrich farm in Oudtshoorn, sit on the back of a critter (journalism was problematic enough without actually riding the beast) and have Donanne take a photo.  I sent it as a joke to my editors at The Christian Science Monitor in Boston.  They turned the joke on me by publishing the photo on the front page.   Three decades later I was no longer a reporter. I had come to look at animals, not sit on their backs.  Moreover, the country’s social system had entirely changed.

The last time we visited, South Africa had been wrapped in the stultifying embrace of apartheid.  In those days Africans and Europeans passed each other on the sidewalks of Johannesburg, never looking at one another, as if they inhabited different worlds.  Now the government was no longer controlled by the Afrikaners’ National Party – which had seemed as immovable as Gibraltar when I covered elections there – but by the African National Congress, the party of Nelson Mandela.  Unquestionably things had changed. 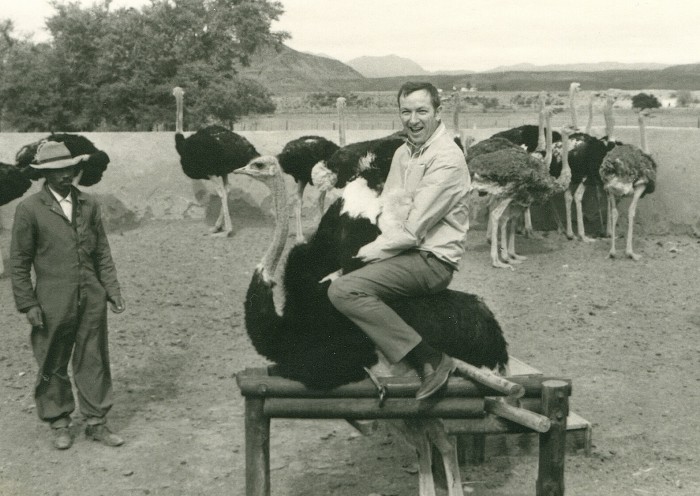 At the airport waiting lounge in Heathrow two men on a bench behind us were talking.  “One thing I’ve learned,” said the first with the flat sound of South African English, “the bank is not your friend.”  I glanced at him.  He wore a sport shirt and casual trousers and had the athletic good looks of a young professional who played rugby with friends on the weekends.  He and the other man whom I could not see – he was directly behind me – went on talking business.

After a while a third voice joined theirs.  The newcomer was obviously South African.  His voice and accent were the same.  Eventually, when asked, this person said his father was a Pedi, his mother a Tswana, that he had been brought up in Soweto.  Say again!  I glanced over my shoulder.  An African had joined two whites, a man of the same age, dress and grooming.  I paused for a moment, listening to them.  Then I put my finger in my book and stood to stretch my legs.  I walked to a place where I could observe the trio.  Nothing could have seemed less remarkable: three men talking in an airport waiting lounge.  But I could not help smiling to myself.  Thirty years ago when I last visited South Africa such a scene would have been fraught with political activism, perhaps even with political consequences.  No more!  Things, in fact, do change!  Even in a country where – when I was covering it – no National Party politician would even acknowledge the possibility of change.

Never acknowledge the possibility of change?  To cite chapter and verse of this contention, let me quote from an opinion piece I wrote in May, 1973, datelined Johannesburg.

“’Change is a word foreign to our political idiom,’ the white-haired Afrikaner explained.  Recently retired editor of a nationalist government-supported Afrikaans newspaper, he spoke without embarrassment.

“Surely, I suggested, there were signs of potential change: a wave of illegal but successful strikes by Africans, a heightened social consciousness.  Political realism required that they be recognized and discussed.

“The Afrikaner shook his head with a tolerant smile.  ‘Our traditional way of life will be maintained,’ he said.  ‘White identity and civilization will be preserved.’

“And that was that.

“We had reached that seemingly inevitable point in an outsider’s conversations with high-level government supporters here where rational discussion falters.  A curtain had descended and there was no penetrating it.”

Now almost 30 years later, I could not help thinking how liberation and presumed political equality must be for South Africa. And of how rigid and confusing had been the old pigmentocracy; it had required a police state to enforce it!  An African steward served us on the South African Airways flight to Johannesburg.  African women worked as stewardesses on the SAA 747 that took us from Joburg to Cape Town.  Africans took our tickets at the airport, bussed us to our plane.  In the old days all of these jobs were done by whites.  Long live the new South Africa!

But on our flight another aspect of the new South Africa reared its head.  As we neared Johannesburg, a fellow passenger, South African, arrived to greet friends seated just ahead of us.  He shook hands with the man sitting on the aisle, then leaned over to kiss the man’s wife.  They talked of mutual friends, who had emigrated.  The newcomer was in frequent e-mail contact with them.  “I said goodbye to them so many times,” he laughed, ”it was a relief to have them gone.”  Then they spoke of the murder only a few days earlier of Marike De Klerk, the ex-wife of former South African President F. W. De Klerk.  She had been stabbed to death in her apartment in a well-guarded high-rise.  I had read about the murder at the airport hotel in Heathrow.

I felt no concern about our personal safety in the new South Africa.  But Marike De Klerk’s murder suggested how difficult was the transition the country was still in the process of making.

The Saturday mid-day flight from Joburg to Cape Town was full of what South Africans call holiday-makers.  Summer was just beginning.  December here accords with June in the northern hemisphere.  Kids had just gotten out of school for the summer holidays; the plane was full of families, white families, it must be admitted.  Things have not changed that much yet.

Puffs of clouds dotted the sky all across what I remembered as the Transvaal, the Orange Free State and northern Cape Province.  Enormous cumulus clouds floated, anchored to nothing, as tall as giant skyscrapers.  The earth below was an orange-brown and I mused that it was from this color that the Free State took its name.  (In fact, it received its name from the Orange River which, of course, is not orange.)

The sky cleared of clouds as we reached the Cape.  I spotted the ocean (I assumed it was the Indian Ocean, but it turned out to be the Atlantic), then Robben Island, and the plane banked over the Cape Flats to reveal splendid Table Mountain and Lion’s Head rising above a light cloud of smog hovering over the city.  The smog was new.  Even so that amazing, beautiful city seemed to sparkle in the sun.