After almost 30 years Donanne and I were returning to South Africa.  Why?  Because we wanted our son Paul who would be joining us to see the great animals of Africa before professional life made that impossible. To our delight the country’s social system had entirely changed.

Arriving at the Cape Town airport, we picked up an SUV, drove across the Cape Flats and through the city out to the Romney Park Hotel above Green Point.  We have a very happy recollection of this small, but nicely appointed hotel.  We had a living room, bedroom and kitchen overlooking the ocean.  Paul and his school pal Bill would be across the hall in a smaller accommodation.  The hotel was out a good way from the city center, up a bit from the ocean, but walking down to the business streets below was quite easy.  For a couple of days a local movie company was auditioning young women at the hotel.  As we went in and out, we’d see winsome aspirants all over the halls, studying pages of scripts, primping and happy to ogle two young guys as attractive as Paul and Bill. 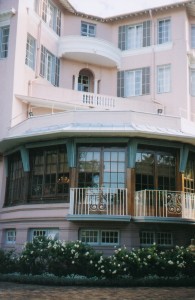 The next day we visited Ursula, a great friend from our Nairobi days (although a generation older) who had eased our adjustment to East Africa.  She had moved to Cape Town where her son Michael lived.  We took her to lunch at the Oasis Restaurant in the Mount Nelson Hotel and sat outside where she could enjoy the garden and pool.  It alternately shone sunshine and rained.  Later a ride down to Hout Bay on the coast, no longer the simple seaside village we remembered, but now “developed” as a full scale suburb crowded with suburban architecture.  We returned via the impressive Groot Constantia with its fabulous views of ocean and mountains rising on either side of it and out across vineyards.

The stabbing murder of Marike DeKlerk, ex-wife of the country’s former president F. W. DeKlerk was still in everyone’s thoughts.  Surfing through South African TV channels Sunday evening we came upon a program memorializing the murdered Mrs. DeKlerk.  An interview with her by an African woman, apparently a celebrity interviewer, was rebroadcast.  During this interview Mrs. DeKlerk read from notes, saying that once there had existed a woman named Marike DeKlerk, but that woman had ceased to exist.  A new person had come into being, a person who had survived a difficult period, but now felt no bitterness, felt only forgiveness.  This new Marike was someone she had always possessed the potential to be, but only recent events had given existence to this person – whose identity was not dependent on a connection to anyone else.

These words, I realized, spoke metaphorically to the position of many white South Africans, people who may feel themselves abandoned and tossed out after long years of what they see as service to others, to Africans – even if that service turned out to be misguided, misdirected.  Mrs. De Klerk said that a new person had come into being, but now that new person had been murdered in her own highly guarded high-rise apartment.  This must be, I thought, the nightmare of every white South African, especially of single women and widows.

Listening to the interview, I wondered if F W himself, after giving up the State Presidency, after courageously bucking Afrikaner tradition to declare an end to apartheid, had also wanted to be a new person.  And so he had shed his “right-wing” wife, so appropriate to his political rise, and taken a new partner, a Greek woman who had little or no experience of apartheid.

The papers were full of it, of course.  The Cape Argus lead headline read: “Marike murder: guard in court.”  A guard at the apartment complex had been arrested and appeared in court after “police traced a telephone call he allegedly made to his employer from a cell phone allegedly stolen from De Klerk’s flat.”  The investigating officer opined that everything pointed to a “simple break-in which went terribly wrong.”

While denying its validity, the article aired speculation “in an Afrikaans weekend paper” claiming that “a De Klerk relative, involved in diamond dealing, who was in serious financial trouble, instigated the murder.”  Despite all the other changes that have occurred in South Africa, English and Afrikaans papers still continued to swipe at each other.  (There were verities, after all.).

Since coming here I have been reading J. M. Coetzee’s Booker Prize-novel DISGRACE.  I have reached the point where the protagonist and his farmer-daughter have just been attacked very brutally on the daughter’s eastern Cape farm, she raped, he burned, the dog shot, his car stolen.  The De Klerk murder is life reflecting art.

One morning we woke to a beautiful day, breakfasted at the hotel, then drove up to the Table Mountain cableway.  We waited in a longish, quick-moving line and were soon ascending in a gondola that turned so that everyone has a view during the ascent.  The mountain top offered spectacular views onto the city below as well as off to Table Bay, straight out, and the Atlantic Ocean off to the left beyond Lion’s Head with the town of Camp’s Bay down below.  We spent a couple of hours on the mountain.

The next day a trip down to the Cape of Good Hope.  We looked forward to taking one of the world’s most scenic drives.  To our distress, however, we found the Chapman’s Park Road closed due to a series of mishaps: fire that had destroyed the vegetation on the mountainsides followed by rain that loosened boulders, some of which had rolled onto the road killing motorists.

At the Cape we took a hike above the actual Cape of Good Hope.  We parked at the more southerly Cape Point.  We walked out to the overlook and, much to our amusement, found on our return that perhaps the most memorable feature of the visit were the antics of brazen baboons, practiced thieves of food from tourists.  I watched a baboon grab a sandwich right out of the hands of a startled visitor.  These long-tooth creatures are not to be messed with.  A guard with a Sisyphean task runs about the carpark chasing them off with a slingshot.

A guide at Cape of Good Hope said the pines on the lower reaches of Table Mountain, umbrella or stone pines, not indigenous species, are gradually being uprooted from the slopes.  We feared a floral authenticity campaign was being waged.  But perhaps the purging of the pines stems from conservation measures.  Apparently they soak up water that needs to be used elsewhere. 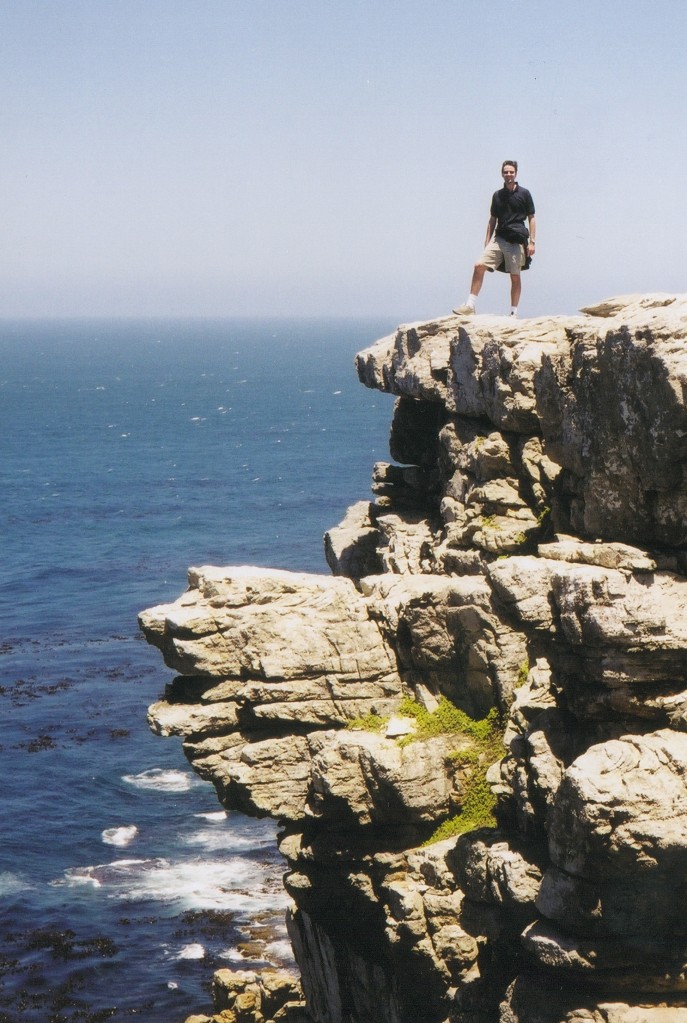 At an art market just outside the park gates we did some shopping.  Paul got a mask, a small green stone hippo and quite a large wooden hippo for his living room, much too large to carry on a plane.

Having seen Robben Island floating out in Table Bay and knowing that Nelson Mandela had been imprisoned there with other anti-apartheid leaders for more than two decades, we took a tour to visit it.  A former Robben Island inmate led the tour.  We saw prison cells and the work yards where prisoners broke “big stones into little stones,” all within sight of Cape Town.  I found the tour rather depressing.  (Who wouldn’t?)  The heartening aspect of the experience was to ride on a ferry half filled with African tourists.  All harmonious, of course, but 30 years earlier such mingling of the races would have been unthinkable.  Things do change. 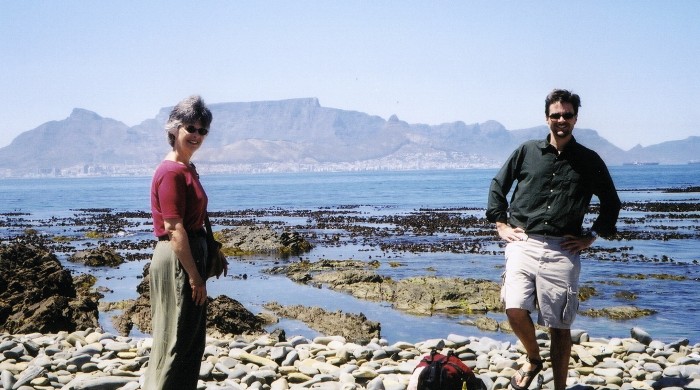 Next post:  A trip to the Cape Flats, a former township area, still very depressed