Botswana is a country few people recognize. Why did we go there?  To see the animals.  Unlike Kenya which pursues tourists with a high capacity, low cost strategy, Botswana pursues them with a low capacity, high cost strategy.  That approach means that for their big bucks tourists generally find high quality accommodations and a sense of being an observer in an animal kingdom.  Here’s a report of a second day of animal viewing.

Up before 6:00 for a light 6:30 breakfast.  Then mokoro rides to a nearby island and a nature walk of two to two-and-a-half hours.  I thought perhaps I would not go – I’d had some tetchy tummy in Namibia – until I went onto the deck of our tent and saw what an incredibly beautiful and fresh day was unfolding.  Then two Cape buffalo charged through the swamp with egrets and birds on their backs and I changed my mind.

Not much to see at first.  In a mokoro left there for the purpose, we crossed from one island to another where we came upon perhaps 15 Burchell’s zebras and several groups of impala.  Gradually we worked our way fairly close to them.  Among the zebra a single wildebeeste and we also saw a topi (called here a “tsessebe”).  Not too bad and my first timer afoot. 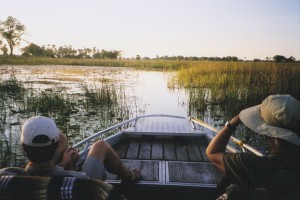 View from a mokoro: Paul and Donanne

After returning, a quick hop in the pool for me – very refreshing – with Ian and Inger also there.  Lunch here is a kind of brunch served at 11:00.  I had an omelette, very tasty.  Tea is served at 4:00.  Dinner at 8:00 and we are very well fed.  I returned to the tent with Donanne and finally took a nap till 2:15, then wrote in the log I’m keeping.

Tea with a couple of young Americans, a husband (Tony) and wife (Jacinta) team out here on a two-year contract with the University of Pennsylvania doing post-doctoral research on baboons.  They focus on cognitive abilities and how baboons relate to one another.  They’ve been here about eight months. They live – so says Gavin – in a simple six-man hut with a floor made of tarpaulin, not wood. (Quite a way to test a marriage!)  They were at Eagle Island to pick up equipment and said their research project supervisors arrive tomorrow.  They’ve done a similar stint of baboon research in Ethiopia, looking at animals who’ve adapted to a desert habitat.

Their research is particularly interested in a baboon troop of 84 members; the number seems to remain relatively constant despite births and the troop has remained between 75 to 90 animals over the 20+ years of this research.  There’s a local who makes a daily count of the animals and Tony and Jacinta do various research functions with them.  They say they love some animals, hate others.  And some animals hate them.  Apparently adolescent females go through a stage of hating Jacinta.  Whenever they see her, they scream at her.  When she sees one, she just walks away.  “The worst human is better than the best baboon,” they say.

After tea a ride in a motor launch looking for hippos which we never did see.  Bill spotted elephants at a great distance and slowly we made our way toward them.  Lost them.  I spotted a couple of elephants (I suspect they were the same animals) and our guide Leopard got us closer.  Two Cape buffalo rose into view; Bill thought they’d been lying down when we arrived.  We watched them and the elephants.  One of them placed his trunk flat against the trunk of a tall, splindly palm and shook it till it gave up coconuts.  Leopard says elephants eat coconuts whole (can this be?).  Donanne says this must be the way they get their fiber.  We were out till sunset.  That the wildlife is not abundant disappoints, but you cannot beat this place for the feeling it gives you of being out alone in the real Africa.

Dinner with Gavin and the mainly silent Leopard.  Gavin acknowledged the problem of game not being abundant here and the fact that tourists who come all this way and spend big bucks expect abundance.  An interesting discussion of tourism and game-viewing in Botswana and where it may be headed.  The government fortunately has enshrined the principle of high-cost, low-numbers and that probably bodes well for the country – at least for now. 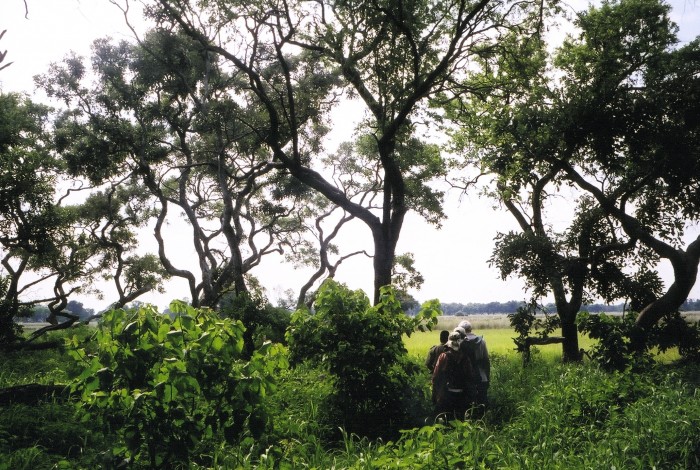 A great morning the next day.  After early light breakfast Leopard took the four of us in the motor launch upriver in what I take it is the main branch of the Okavango.  We went for some distance, passing the camp of the baboon researchers.  (The third researcher waved to us, a white man without Tony’s dark beard and without a shirt – so presumably not Jacinta.)  We reached a pool where we spotted a distant hippo.  Leopard was obviously – perhaps wisely – reluctant to venture closer.  Our first hippo sighting and – alas! – all we could see were the bulbs of two eyes scoping us out, little piggy ears and occasionally a bit of head raised higher.

We continued along and after a bit we came upon four bathing hippos (they seem to bathe during the entirety of the day), blocking the river channel.  We watched each other.  Screwing up his courage, Leopard was able to rev the motor so as to provoke the hippos to dive.  We charged past (and presumably over) them. 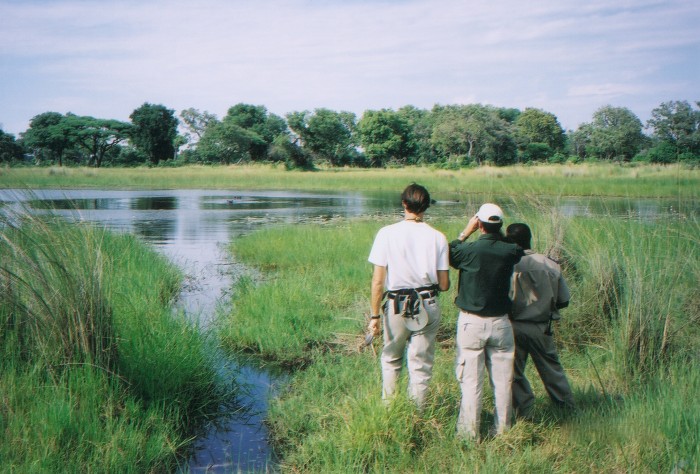 Later we scared two hippos just at the side of the channel and saw them dart into the water in a way that gave us some sense of their size.

What they saw: hippos bathing, gazelles in background

We also parked the launch for a few minutes beside a young crocodile who remained immobile – except for breathing – during the entirety of our inspection.  Teeth protruded from both sides of the jaw, almost as if stitching the jaw closed.  Beautiful markings.  Amazing protuberances on the tail.  Later we saw the outline of quite a large crocodile beneath us in the water – and in parts the river teamed with fish, some quite large.

Leopard stopped the launch sometime later – we had been seeing red lechwes (they’re an antelope of these parts) and distant zebras grazing on the banks – and we got out of the launch.  Walked inland on an island to a pool where we saw five hippos, again only the upper portions of their heads: eyes, nostrils and occasionally as much as mouths.  Returning to the launch we had tea and looked upstream over the river to see two herds of lechwes grazing on either side of a swinging curve in the river.  “The Peaceable Kingdom.”  It reminded me of Bierstadt paintings of Yosemite in that we were viewing glorious, pristine, timeless nature seemingly undisturbed by man.

I hoped we could continue upriver – don’t make us leave this magical place! Not just yet! – and, in fact, we did.  In the clear air the colors are sparkling and vibrant – the blue of the sky accented by far-off cumulus clouds, the vital greens promising riches.  Leopard, of course, called out the names of various birds we saw, not an interest of mine nor Paul’s, but one of D’s and especially Bill’s.  These two are keeping lists of the critters we see.

When we reached as far upriver as we would go, there was some question of an interesting-looking shape under a tree at some distance.  Bill checked out the shape with binoculars and declared it to be a lion.  We went to investigate.  Was it a lion?  No.  Yes!  Male?  No.  Female.  No, male!  Leopard took us ever closer and we did make out that characteristic male lion profile, sitting very sensibly in the shade of a tree.  “We have yet to see a cat move,” said Bill.

Suddenly, for a reason we couldn’t detect, the lion rose to a higher sitting position.  Then he came out and sauntered majestically for perhaps 15 yards before disappearing behind bushes.  Wonderfully tawny and muscled, muscles rippling as he walked.  “A teenager,” pronounced Leopard.  “The Leonardo di Caprio of lions,” quoth I.  Quite a magnificent and lovely sight.

Back to camp.  Breakfast.  Packing.  Tipping.

Two Afrikaner couples arrived on the plane that took us out: parents and other relatives of the camp manager at Savuti Elephant Camp.  Also a young African woman who might be the daughter of Lecco who told us at breakfast that his daughter was joining him for Christmas.