Botswana is a country few people recognize.  Even fewer can locate it on a map.  (It’s north of South Africa in the middle of the African continent, an enormous parcel of ground that is mostly desert, but contains the lush, animal-luxuriant Okavango Delta.  It has significant diamond wealth which makes it, per capita, one of the most prosperous countries in Africa.)

Why did we choose to go there?  To see the animals.  Unlike Kenya which pursues tourists with a high capacity, low cost strategy, Botswana has decided to pursue them with a low capacity, high cost strategy.  That approach means that for their big bucks tourists generally find high quality accommodations and a sense of being an observer in an animal kingdom instead of one of many tourists who are sharing game parks with wildlife.  Even when we first arrived in 1969 in Nairobi, where I was based as a journalist, you could come upon cheetahs in the Nairobi Game Park just outside of town literally surrounded by tourists in rental cars.  We should know; we were in one of them.

But for our return to southern Africa after an absence of 30 years we wanted to see wildlife in the environment Botswana offered.  We were not disappointed.  What follows – four posts – is an account of our time there, not quite a week just at Christmas, 2001.

We flew into the country from Windhoek, Namibia: an hour and 40 minute flight – without stewardess – on Air Namibia, destinations: Maun, Botswana, and Victoria Falls, Zimbabwe.  The plane had rows of single seats on both sides, no overhead bins and no worry about luggage under your legs.  Carrying capacity: 20 passengers, completely full.  As we entered the plane, we were handed plastic-wrapped lunches: a bottle of water, a fruit juice container, chicken, fruit, German potato salad, cheese and crackers.  Quite satisfying.  I took the water, drank the juice, ate the fruit.  German potato salad was tempting, but not advisable, heat and mayonnaise not mixing well.  Five of us got off at Maun.  Oops!  The luggage of someone headed to Vic Falls remained unclaimed when we left the baggage area.

We were met by Gametrackers Botswana.  Transferred quickly to a small plane.  Flew about 20 minutes north across what on a map is shown as water, but from the air looks like land: the Okavango Delta.  En route Bill pointed out a lone elephant grazing below.  I tried to determine if there was human habitation below; certainly there were almost no signs of it.  Once we landed and were driven to Eagle Island Camp, we could see that the place looked like “the real Africa:” intensely green, lush, trees in heavy leaf, high swamp grass all around us.

At the entrance to Eagle Island we were greeted by the singing staff – in this case all women.  (The singing seems to be something that marketing guys have dreamed up.)  We were given a short introduction by Lecco, a tall, husky, middle-aged Tswana with wit and a sense of humor.  We were assigned our guide, a 5’8” Tswana called Leopard who met us at the airstrip and drove us to camp.  Also met a guide called “Mighty” – you wonder where these names originate! – who also possessed of a sense of humor.  Dear Leopard seems to lack one.  He’s well-intentioned, well-informed, a trifle pedantic (he keeps using the scientific names of plants and animals) and quite talkative.  We also met Gavin, a white who, it turns out, grew up on a tobacco farm in Rhodesia.

We arrived about 12:30 and were hungry, but there was no sign of any lunch.  Paul inquired and Lecco had some sandwiches made up for us.  We were shown to our accommodations: ultra luxurious “tents,” complete with air-conditioning, 24-hour electricity, shower and toilet, two sinks, two largish single beds.  There are three baskets above the headboard in our tent plus three woven rugs – of sisal, says Donanne – woven blankets – “throws” – with an African look folded at the foot of each bed.  Bedside tables with lamps, a couple of chairs and – pièce de résistance! – a writing desk, all these of dark wood.  The desk features mirror, penholder and ancient brass-tipped ink well (no ink!), a stationery rack and two lamps of dark wood with a carved African motif.  (All very Ernest Hemingway.  Interesting how that impact of world consciousness has played itself out in décor here.)  Over the bed a ceiling/canopy from which hangs mosquito netting that falls all the way to the floor.  This may be more for show than for protection from insects, but it does give the visitor that “real Africa” feeling and offers psychological protection.

A game run after tea.  We went out in plastic – or probably fibre-glass – mokoros.  They’re two-passenger piroques with a guide poling along and explaining.  They feel easily tippy – though they’re probably not as tippy as they feel!  There is an extreme pleasure to be sitting in the mokoro, gliding along in silence, the guide’s poling giving an occasional thrust in the lush timelessness of the swamp.  A sensation of existence without time.  Lovely.  Us and the pristine wilderness – and no sounds of motors.  As for the wildlife we saw it was mainly birds.  And disappointing in that regard. 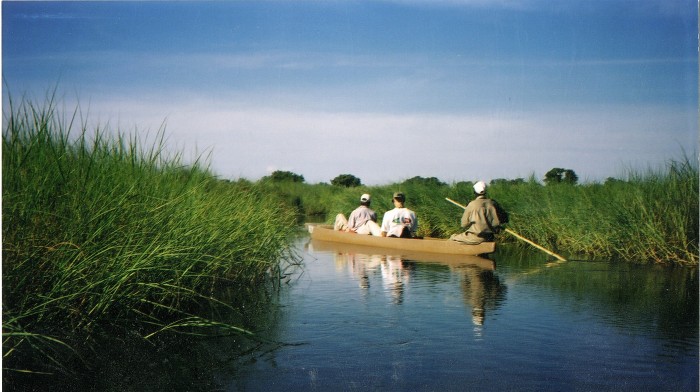 Game-viewing via mokoro: us and the pristine wilderness!

Leopard fetched us for dinner at 8:00.  (I showered meantime.)  Joining us was a South African couple seen earlier lolling at the pool – not everyone comes for wildlife – Ian with a travel company (and presumably on a fam trip) and his attractive blond wife Inger, a psychologist for a firm trying to match job-seekers to job-prospects.  She proved to be extremely talkative and very amusing – and rather conscious, I thought, of the presence of Paul and Bill. (When I mentioned the next evening that it seemed quieter than before, Gavin, the camp manager, piped up with, “Yes, Inger has left.”)  As we talked, “bell” frogs (“bell” is Leopard’s take on “bull”) made an incredible racket out in the swamp.

Inger got to talking about American TV and the dreadfulness of Jerry Springer and how compelling she found it, unable to resist it (this with much laughter).  She spoke of the South African version of the US reality show Big Brother, recently won by a gross, outspoken, unrepentant Afrikaner called Ferdi.  He seems to have triumphed partly because the main viewing audience was white as was the main voting audience and because his politically incorrect views mirror those that many white South Africans hold, but dare not speak their name.  Inger thought him a “male chauvinist pig,” a designation not heard recently in the States, and spoke of “the people we are trying to be,” a designation that many whites in southern Africa, perhaps blacks too, are dealing with. 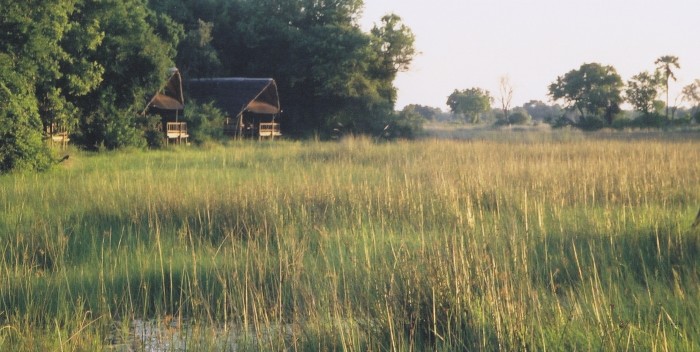 Gavin, the camp manager, spoke of growing up on a tobacco farm with parents very supportive of Ian Smith.  One had the feeling that he, too, had had to come to terms with “the new people we’re trying to be.”  As had Booysen, the African ex-guerrilla fighter who toured us through disadvantaged Cape Town and who’d appeared before the Truth and Reconciliation Commission.  He also needed to consider who he was and who he had been and who he would be.  (He’s in school again and his sons keep after him to do his homework.)  An interesting national endeavor where people want to be someplace where they are not yet.

If you’ve enjoyed Travels in Africa, you might want to check out AFRICA, AFRICA! Fifteen Stories.  Just click onto www.amazon.com/books and type in Africa, Africa! Frederic Hunter.  The e-book sells for $4.99.  For paperback/hardback ($10 including shipping and handling) write to FredericHunter@gmail.com.

What are the stories about?  A young couple of Americans starting life in Nairobi.  A South African journalist finding himself in Madagascar.  An American woman academic doing the same in Mali.  A colonial running from a past he couldn’t face.  An African who wears his boss’s clothes.  A barking dog quieted by African wisdom.  You’ll enjoy!