Donanne and Fred Hunter did a safari to Southern Africa mainly to show wildlife to their son Paul and his high school pal Bill.  They started in Namibia, the former South-West Africa, drawn by the famous Etosha pan.  This account covers subsequent days.

A second game-run to Etosha.  As we left Okaukuejo Kobus stopped a passing vehicle and asked the driver, an acquaintance, what we might meet up ahead.  He reported that when we arrived at a waterhole overlooking the Pan, we’d see under a low-lying spreading tree a male lion.  Sure enough!  A huge old guy, black-maned, enormous head.  Under another low-spreading tree nearby another male lion sheltered, this one accompanied by at least one – maybe more – females.  Wonderful to see lions here in Namibia and remove the pressure of getting that checked off! 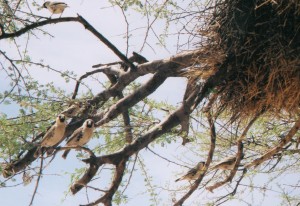 Weaver birds and their nesting place at Okaukuejo

Returning to Ongava I felt jangled by the heat: 104 degrees.  Donanne and I spent the afternoon resting in the cabin.  Paul and Bill went on an afternoon game drive with Kobus and saw a mature black rhino male. Five giraffes at the waterhole as we turned in for the night.

Said straight-faced, somewhat humorless Kobus when we asked about designating animals in herds, prides, etc.  “A kaleidoscope of giraffes.  A dazzle of zebras.”  Phrase-food for tourists.

The others dashed to the Etosha waterhole before breakfast our final morning hoping to see more lions there.  It had rained in the area overnight and animals could get water elsewhere.  The lions had moved off.

A pair of oryx (I think), quite rare, at Etosha pan

At lunch we met an English couple, he a judge (after a barrister’s career), she an activist who has set up a charity – School-Aid UK – to get used equipment from British schools sent out to schools in Zimbabwe.  Sounds like a wonderful program, very grassroots.  Also a German couple.  He had taught German in a Santa Cruz, California, school in the early ‘90s and found the students less interested in their lessons than in surf conditions.

A bit of excitement in the morning.  The other guide NJ – with a very white hunter/Macomber Affair look – had taken the newcomers on a game drive.  When they came upon an oryx, recently killed, NJ leaves the guests in the safari vehicle and sets off on foot to reconnoiter.  As the guests sit in the vehicle, wondering what’s going on, they hear a shot.  Finally NJ appears.  Snooping around the oryx carcass, he – not surprisingly – alerted the male lion who’d killed the oryx.  The lion charged.  NJ fired the explosive charge; it scared off the lion.  Leaving tips for the staff in the curio shop Donanne overheard NJ and Mark, Ongava’s most senior guy, discussing the incident.  NJ was told that he’d have been in deep dudu if he’d shot the lion since the presence of lions in the reserve adds importantly to its appeal. 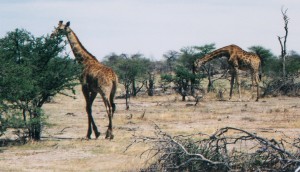 A kaleidoscope of giraffes at Ongava

At mid-afternoon a flight of ninety minutes through rain from Ongava to Eros Windhoek.  A guide transfer to Hilltop House through a Windhoek much developed since our last visit.  Now quite a nice-looking small city, the centre full of newish buildings.  The clean air and climate/terrain remind one much of Santa Fe, NM.

Dinner at a place called Joe’s, founded in 1920, obviously with a German past – “jagermeister” announced a neon sign on the roof.  Waitresses were white, Coloured, African.  A mainly white crowd with some mixed-race couples and their kids.  Paul and I had “Devil’s Spare Ribs” – okay.  D had a summer salad with beef filet chips (and ice cream and chocolate sauce) and Bill had not only a Greek salad but bushman’s specialty, a combo including taste treats of alligator, ostrich, zebra, kudu, chicken.  He sent the ostrich back because it was too rare, complained of too many bones in the alligator. 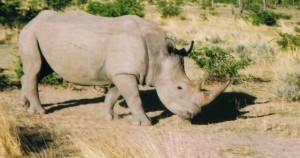 Reviewing the trip, I wonder if Ongava Lodge is having difficulties maintaining itself with the kind of luxury class tourists we represent.  Carol said that the lodge did not customarily take bed-and-breakfast bookings, but had now begun to do so.  A couple arrived during dinner our first night, looking for lodging.  Apparently they’d been locked out of Etosha where the park is closed at 6:00.

This private enterprise approach to running a game reserve appears tricky.  Ongava seems to have been created out of four not very profitable white-owned cattle ranches by a group of South African shareholders.  According to Kobus, cattle ranches customarily included wild stock – oryx, kudu, eland, especially animals suitable for meat – so these species may have been present when the shareholders got rid of the cattle.  The process of stocking the reserve fascinates, but turns me off.  It’s the antithesis of being in nature.  You wonder if there’s a grocery list of species that the shareholders buy.  And apparently also sell, for Kobus said that surplus animals are sold every couple of years.

The stocking approach has run into some problems.  The Ongava shareholders apparently brought in a dozen elephants at some point. At the northern edges of the property the new elephants heard rumblings of – or whiffed – the Etosha brethren and simply crashed through the fence – or both fences, since Etosha itself is fenced – to join the others.  So now there are no elephants at Ongava.  The shareholders also tried to stock Ongava with thirty ostriches.  But raised in captivity on an ostrich farm, the animals had lost the instinctual coding of their wild cousins.  Having no experience of predation, they were made short work of by the Ongava lions.  So Ongava provides the animals most tourists want to see (though not Cape buffalo) minus ones that don’t work.  Apparently the main predators – lions, leopards, cheetahs – come in on their own, lions digging beneath the fence.  It seems the importation of lions can be done only if Ongava installs fences – electrified, perhaps – that will prevent the predators from moving onto cattle ranches and preying on stock.  Sounds like Idaho and the wolf vs rancher controversy. 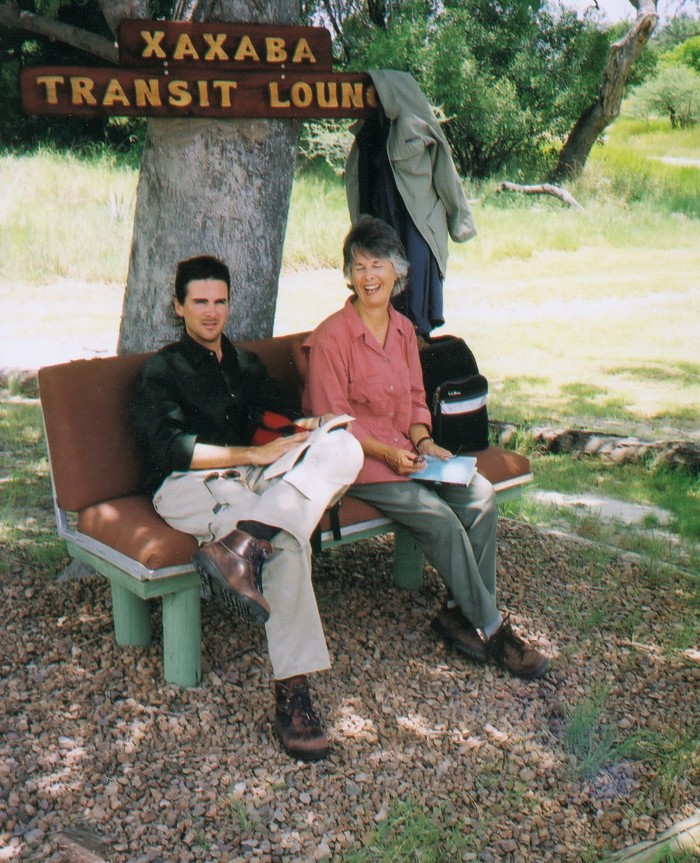