Fred Hunter had wanted to visit the Etosha Pan since the early 1970s when he covered Africa as a journalist.  As the new century began, he got there with his wife Donanne and son Paul.  His report:

Namibia is dry, desolate country.  Still one hears reports that a magical place in the north – the Etosha Pan – teams with wildlife.  This report evokes skepticism from anyone who knows the terrain; the place is mainly desert.  But the reports persist, tantalizing travelers who are deeply soothed by wildlife.  Reports claim lions, gazelles you never saw in Kenya, herds of elephants roaming the woodland on the south side of the pan.   What’s more the area is relatively untouched by tourist development.  A deeply enticing prospect.  Can it be true?  We meant to find out.

Thousands of years ago Etosha Pan was a lake.  At some point – maybe 16,000 years ago – tectonic plate activity changed the course of the Kunene River, sending it to the Atlantic.  The 75-mile-long lake dried up, forming the pan.  Since then, the place has been the home of animals and legendary peoples – the Herero, the Bushmen, the Ovambo.

Our Cape Town tour agents suggested other Namib attractions – giant sand dunes, Walvis Bay, Fish River Canyon – but our sights were set on Etosha Pan.  We were four travelers: my wife Donanne and myself, our son Paul and his high school pal Bill who had long wanted to visit Africa.  We arrived in Namibia on Saturday, left on Tuesday.

Donanne and I had visited Windhoek, Namibia’s capital, once, thirty years earlier when I’d been a journalist covering Africa.  The country had been called South-West Africa then.  It had been a UN trust territory administered by South Africa in the inimitable manner of apartheid.  At the time of that visit African contract laborers had rioted in Windhoek’s Ovambo Compound (into which I snuck to have a look at conditions) and the Marxist South-West Africa People’s Organization (SWAPO) was leading efforts to bring independence to the territory.

Wildlife on Etosha pan, disappointing at the wrong time of year

We were interested, of course, to see if thirty years had changed the place much.  Certainly Windhoek was transformed from a sleepy German colonial town to a small national capital.  Still, game-viewing at Etosha was the main reason for our visit.  Since Paul and Bill would be seeing African animals for the first time in the wild, we hoped it would prove a success.

We flew north from Cape Town to Eros Windhoek, apparently a charter service airport (so say my notes) where we caught a small plane to fly further north to the Ongava Game Ranch, a bit south of Etosha.  We were fetched at the Ongava airstrip by Nicola, the lodge manager, a young New Zealander who has Australian citizenship and British residency rights.  At Ongava Lodge we met Carol and, so it seemed, the entire Ongava staff.  They served us guava juice and we signed releases.

A traveler’s first arrival at a game camp, especially now that so many of them are rustically luxurious, constitutes a crucial moment.  At Ongava we walked up a slight incline through a stand of mopane trees characteristic of Namibia’s dry climate.  We surmounted a slight ridge and then descended a path into a great hall. It had a seating area to the left and the communal dining area to the right.  The hall was roofed, with nary a window to be seen, wide open on three sides with views out over the plains of what is a large game ranch, fenced to keep the resident game inside.  Below this great hall stand the individual cabins.  Being the lodge’s only guests, we were assigned the nearest cabins.  Below them a water hole had been dug.  Animals came to it regularly.  Paul was much impressed with the layout, as who wouldn’t be on his first entry into a safari camp. 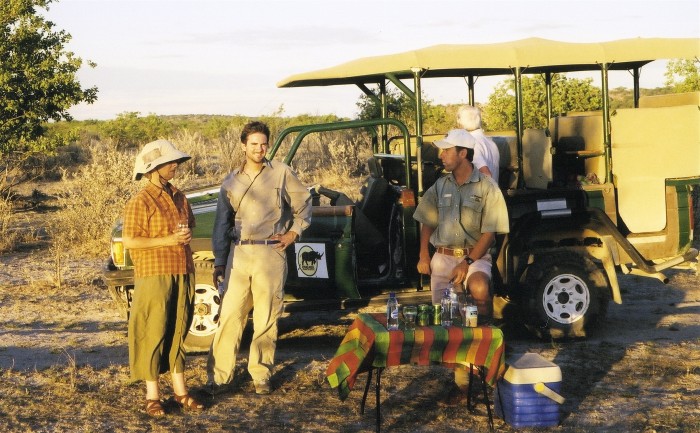 As we were waiting for the game drive, warthogs drinking at the waterhole were joined by a giraffe; it spread its legs in that awkward giraffe way to allow its long neck to reach the liquid. Game seen: Burchell’s zebras, wildebeest, hartebeest, springboks, kudus, waterbuck, guinea fowl, bustard, giraffe, warthogs.  We got quite close to rhinos.  Before dinner a rhino came; Donanne called me from the shower to see it.  At dinner two rhinos.  Before bed four giraffes.

Our first full day at Ongava Kobus drove us up to the Etosha Pan, stopping first at a tourist station called Okaukuejo (pronounced Oka-coo-you), originally built in the 1900s, complete with fort.  There were swimmers at the pool, their variety of pigments something unthinkable in South Africa thirty years ago.  According to Carol at Ongava many Namibia visitors arrive in Windhoek, rent a car and drive four or five hours north to Etosha.  Many see the park without guides.  Often they’re from Germany, given that South-West was once a German colony.

Entering the park we saw plenty of wildlife, especially gazelles.  Paul spotted a fox and later called out to say he saw rhinos, possibly elephants.  Kobus stood in his driver’s seat as we gained on the herd and sure enough there were five or six bull elephants grazing.  In the old days – gone forever – we would have simply taken off across the bush, but the rules in Etosha are that vehicles cannot leave the road.

Unfortunately, this is clearly not the best time of year to come here.  There seems to be no green anywhere; everything is desert.  But this is when Paul, a grad student, could get away.  The way winter works here (in our summer months; it’s now their winter) it’s possible to sit on the benches on one side of the waterhole at Okaujuejo and see abundant wildlife: 60 elephants at a time, says Kobus.  He also told us of a pair of visitors who fell asleep on the benches there.  They were attacked by two lionesses who jumped the wall between viewers and waterhole.  One tourist was killed.  That wall has now been upgraded to make it lion-proof. 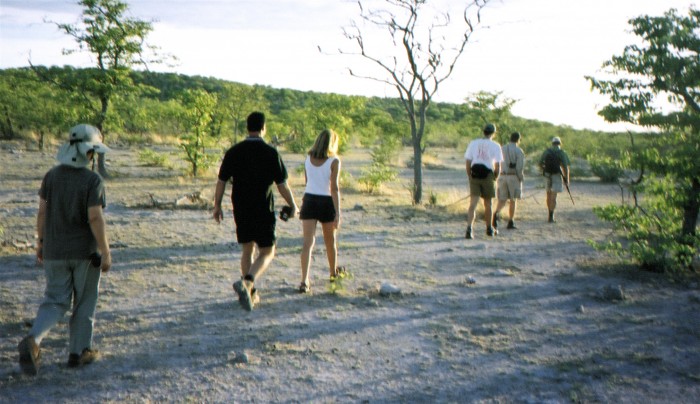 The following morning a pre-breakfast game-walk, led by Kobus, through a section of Ongava reserve that had fewer trees and little underbrush.  Joining the four of us were Andrea and Deon, she a manager of a Wildlife Safari camp in Botswana, he a pilot, born in Cape Town.  Deon showed me the enclosure they’ve fixed on top of their vehicle.  It opens up over the hood, providing a raised tent which they enter via ladders.

At breakfast a most pleasant conversation with a German, mid-40s, resident in Pretoria.  He was traveling with a girlfriend, a doctor who cannot get the necessary permits to work in South Africa and so join him permanently.  This struck them as curious and frustrating since South Africa has its problems of professionals leaving the country.  The German apparently works for BMW, in their Foreign Service, as it were; he’d been there eight years.  He asked what struck me as the most significant change since we were last there.  I said the intermixture of the races, the fact that the ideology we-are-all-one-people seemed so different from the separate development ideology of apartheid.  The German insisted that racism still existed in people’s heads.  He thought only time and biology, the renewal of generations, would solve the race problems.

The German noted that Johannesburg was now dead.  Because of crime the BMW offices had to be moved from downtown Joburg to a site halfway to Pretoria.  “One woman would not work past 5:00 o’clock,” he said.  “That’s when pistoleros started riding the trains.”  Apparently there are “disadvantaged” classes of people that need to be hired: male and female blacks, male and female Indians, white females.  He talked about the problems of keeping talented young black professionals for whom there is much competition, about there being considerable unemployment among some white groups.  “You see whites selling newspapers in the afternoons.”  And, of course, the AIDS problem adds another significant complication to southern African life.