Donanne and Fred Hunter returned to southern Africa after an absence of 30 years.  In our absence the region saw significant political change.  Apartheid was gone in South Africa.  South-West Africa had become Namibia.  Rhodesia had become Zimbabwe, a once prosperous country driven into near-chaos by a ruthless dictator and his minions.  Not a place you wanted to visit – except that in its northwest corner lay Africa’s greatest natural wonder: Victoria Falls.

Donanne and I first visited the falls in mid-March, 1970.  The Zambezi River flung itself off the cliffs on the Zambian side of the falls with the same abandon that we would shortly see in bungi jumpers flinging themselves off the bridge between Zambia and Zimbabwe.

In March 1970 the river reached the Rhodesian side as heavy rain.  Ill-advisedly we went to look at it without either proper rain gear or bathing suits.  We got drenched through our clothes to our skin and maybe even into our guts.  The chasm into which the water plunges is only about a quarter of a mile wide.  So it’s possible to view the whole extent of the Falls at fairly close range from the Zimbabwean side.  The full flow of the river cascading into the depths creates a back-spray that, having nowhere else to go, rises out of the chasm in clouds of mist.  These fall back on viewers as rain, sometimes so thick that it’s almost impossible to see the Falls.  When the river is lower – as it was at this Christmas season – the Falls are easily visible.  Intrepid, perhaps foolhardy, adventurers even climb out along the Zambian edges to watch the waters surge past literally at their feet.  The entire experience is a must for travelers in southern Africa.

When we returned in late 2001, the Falls were as impressive as always.  Traveling with Donanne and me were our son Paul and his high school friend Bill, both in their late 20s.  This visit the flow of water sent manageable mist into the air.  The town of Victoria Falls had been “developed” into a kind of African Disneyland.  (That’s not meant to be snooty.  Africans have as much right to a Disneyland as Americans and in Zimbabwe the waterfall isn’t turned off when the park closes.)  In addition to the splendid luxury class Victoria Falls Hotel, tourist accommodations included the first class Illala Lodge, charming and comfortable, where we stayed, and the relatively new Kingdom.  It offered special rates to residents of Zimbabwe and was filled at this Christmas season with newly moneyed, middle class Africans.

If security was problematic in the rest of Zimbabwe, it was more than adequate here.  Why?  Because Victoria Falls had become a true cash-cow, a prime source of precious foreign currency.  Foreign visitors here could ignore the realities of Zimbabwean life, but they paid to do it.

Entry into Zimbabwe from Botswana (from which we were coming) cost $30.  In greenback cash.  No travelers checks.  No bank checks.  No credit cards.  Leaving the country cost $20.  In cash.  If you did not have exactly $20, they took what you had.  Only a $50 bill?  Thank you very much.  That will do.  Entry to the walkway to view the Falls, formerly free, now cost $20.  The security here is precarious.  There are not always guardrails, spoiling the view of the Falls.  So the visitor wants to be very, VERY CAREFUL where he steps.

The visitor learns that the money game is a major sport in this enclave cut off from the rest of Zimbabwe.  Needing money, I inquired at the Illala Lodge’s reception desk as to the rate of exchange.  “It’s 53 Zimbabwe dollars for one American dollar, sir.”  But out of nowhere someone whispered to me that just across the road at the super deluxe Victoria Falls Hotel the rate was US $1 = Zim $55. 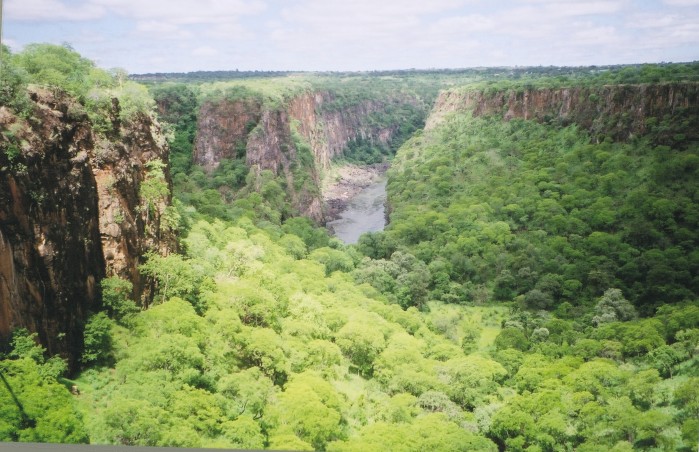 We hastened to the Vic Falls Hotel cashier.  No, said she, she would give us only the official rate (1=53).  However, we might seek out the Bureau de Change just behind the post office; he offered better rates.  Before seeking the Bureau de Change, we decided to eat at the Vic Falls.  We repaired to the terrace overlooking the bridge across the Zambezi chasm.  Splendid view.  The Vic Falls Hotel is a true, unashamed bastion of the colonial past.  In the room leading to the terrace hang larger than life-size portraits of King George V and Queen Mary.  Given the full military uniform, I assumed the King must be Kitchener.

An indifferent meal for such a prestigious establishment!  Our drinks included Coke Light and Appletizer.  When the bill came, the Appletizers were Zim $500 each – almost US $10 per can.  What?  Impossible!  It’s a soft drink.  I questioned the waiter, asked for a price list, demanded to consult the maitre d’.  Yes, he explained, Appletizer cost Zim $500 per can.  It was imported from South Africa.  The coke cost Zim $65 about $1.15; it was locally manufactured.  I paid the tab – with a credit card, negotiable here.  Oops!  Credit card purchases carried a surcharge.  In Vic Falls it’s hard for the newcomer to figure out the money.  The informed traveler in Zim carries lots of American currency (preferably small bills), seeks the best possible exchange rate. He pays everything possible in cash.

We were still trying to find out the best exchange rate.  The Bureau de Change in the Elephant Walk Mall behind the Illala Lodge offered this rate: US $1 = Zim $150.  Donanne and I cashed three travelers checks (which now seem a relic of a bygone past).  Paul and Bill went off to find a safari outfit, intending to do the day-long rafting trip below the Falls.  Bill got the safari broker to lead him to yet another Bureau de Change.  It offered US$1 = Zim $220 – even for travelers checks!  This discovery made possible our doing things that would surely have been out of reach at the official rate.

For example, the four of us had dinner one evening at the Jungle Junction buffet at the Victoria Falls Hotel.  Terrible name, great buffet, beautifully done: Zim $3000.  (That’s $56 per person at the official Zimbabwe rate, but less than $14 per person at the rate Bill discovered.  Good old Bill!  Great traveling companion!)  As we ate dessert, an African woman, a fellow diner, passed us – on a walk outside the pavilion – carrying a baby tied onto her back.  We said goodnight to her and the baby and she seemed pleased that we did.

Next post: There’s more than money to consider in Vic Falls.