“Malawi is green and unspeakably beautiful.  Its small mountains rise unexpectedly off the plains.  Its sunsets grab the breath right out of your lungs.  Its length stretches more than five hundred miles in the deep trough of Africa’s Rift Valley, but at no point is it more than one hundred miles wide.  The country nestles against a long, narrow body of water, the southernmost of the Rift Valley lakes, achingly lovely, known in colonial times as Lake Nyasa, but more commonly now as Lake Malawi.  On maps the country and the lake look like longtime lovers snuggling spoons in an embrace that never ends.”

So reads the first paragraph of my novel JOSS The Ambassador’s Wife.

Since we were in Malawi’s neighborhood in early 2002 and since the writing of the novel was well advanced, it seemed imperative to take a look.  So Donanne and I traveled to this beautiful little country to refresh our memories of what we’d seen of it in 1970.

Virtually all the TIA posts have been developed from letters, notes, dispatches, whatever.  I do not fabricate them from fading memories.  So how is it possible that the notes made of the Malawi trip have simply disappeared?  I’ve searched everywhere for them.  They’re not to be found.

So let this post be about literary research and its use.

We went to Malawi, partly because I wanted to determine if JOSS should be sited in Lilongwe and updated into the 21st century.  We flew into Lilongwe, Malawi’s capital in the central part of the country.  It has been built mainly since 1970 when the capital was Zomba and the commercial hub Blantyre, both in the south.  Our visit occurred less than five months after 9/11.  Wanting to look over the embassy and being a former USIS officer, I checked in with the embassy’s Public Affairs Officer.  She was perhaps understandably not delighted to welcome me.  The embassy had become security-obsessed, a kind of armed camp, its motor pool appearing very military.  Definitely best to locate the story in more innocent times.

I quickly determined that the novel was best left in Blantyre in the 1970s.  In any case, it was there that I had imagined the story happening.  In addition, in 1970s Blantyre there had been a string of political murders.  They served as one thread of the weave that became the novel

But what does that mean anyway?  JOSS’s plot requires a country so small and insignificant that an American diplomat can dispose of his perverse, magnetic and faithless wife and replace her with an impostor.  And no one suspects foul play.  In fact, the embassy staff rallies to his support.  (It was a story that caught my attention in the Times of London.)  Malawi was the perfect place to have this happen.  The more primitive communication systems of 1970 made it more credible.

But there were references in the text to Lilongwe being built and it was useful to see it.  Leaving our hotel one afternoon Donanne and I took a ride in a jitney, the first I had ever taken.  The vehicle stopped along its route, picking up passengers, until it was bursting with Africans and two tourists.  It was eventually so full, in fact, that the fare taker climbed in and out of the front passenger window.

The jitney took us to Lilongwe’s open-air market.  We walked through its pathways, filling our lungs with the smells, reveling in the color of the cloths hanging so as to delineate the pathways, checking out the offerings: edibles, jewelry, shoes, you name it.  My characters Bakili and narrator/hero Tom Craig trail Mama Bo through that market and buy information from her. 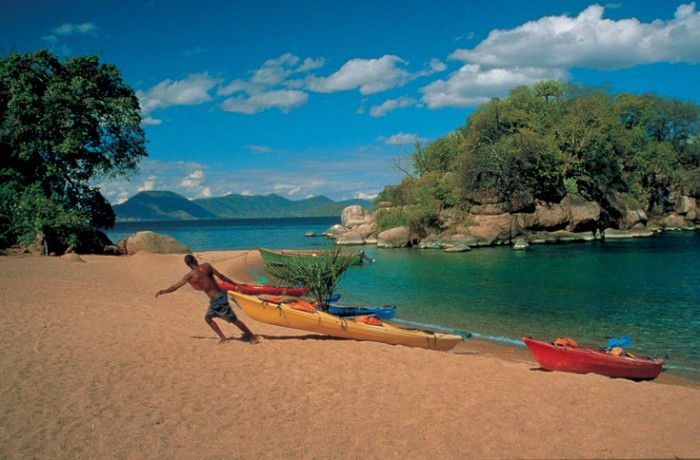 Tom’s free-lance pilot girlfriend Maggie flies in and out of the lakeside town of Salima.  So we hired a car and a driver and zipped over there, passing through landscapes of incredible beauty.  Small breast-shaped mountains dotted the plain.  The beauty tore our hearts, but so did the incredible poverty of villagers who deserve a better deal from life.  We lunched and waded at a lakeside resort and Donanne bought from a pint-sized vendor, maybe ten years old, a lovely carving of a hand-sized hippo which sits today in our dining room.

The truth of the matter is that I don’t recall much about Lilongwe.  Donanne and I took a long walk one afternoon.  The buildings of the diplomatic enclave seemed set very far apart from one another.  Like other non-organic national capitals – Brasilia the prime example – Lilongwe seemed less to spring out of the soil than to have been placed on top of it.

Despite my lack of documentation about it, I feel a great affection for Malawi.  It was just the place to set a fascinating tale!

Next post: Carthage called.  And so we went to visit Tunisia.

In three weeks TIA runs out of Hunter accounts of African travel.  Time for you to offer your accounts.  Half a dozen have come in and they are an absolute JOY to read.  So send them along!  I’ll start posting them in four weeks.  Please make it possible for TIA to broaden its scope.  Write up an account.  Or send an excerpt from a letter or a memoir.  Indicate the date when it occurred and how you happened to be in Africa.  I’ll post the accounts as I receive them.  I’m excited about hearing from you.  TIA readers eagerly anticipate your accounts.  Send them to: FredericHunter@gmail.com.