Sometimes, unexpectedly, a country calls you.  Tunisia called us.  We – Fred and Donanne Hunter – had never been there.  We felt we must go.  Here in the second of our two-part report we leave Tunis to see some of the country.

Leaving Tunis behind, we drove south with wheat fields stretching all around.  We did not go along the coast, which is the preferred route, but inland toward Zaghouan.  Behind the town enormous mountains rise up and we got to see rural Tunisia, passing huge trucks loaded to the toppling from the wheat harvest.  On south to Kairouan.

We had the devil’s own time finding our hotel there.  Once settled, we plunged into the medina, smaller than that of Tunis, of course, but equally atmospheric.  Just across from the gate into the medina – the Bab ech Chouhada, according to our map – stood a collection of tables, metal chairs surrounding them, with idlers passing the end of the afternoon.  We joined them, ordered cokes – the choice was that or coffee – and proceeded to watch the Kairouan world pass in and out of Bab ech Chouhada.  The minutes lazed by.  The sidewalk café tables began to fill.  Finally every one was occupied.  First at the table next to ours sat two middle-aged men.  Friends joined them, singly or in pairs, a couple of them accompanied by their children, apparently an afternoon ritual.  Eventually eight or ten men idled at the table, drinking coffee and holding the children on their laps.  The kids seemed to know all the men and the men delighted in them.

After a while it struck me: men and children.  Donanne was the only woman in the sidewalk café.  The Tunisians understood that we were foreigners.  We had that look, that sound.  It did not bother them that an American woman sat among them.  Would it have bothered them if a Tunisian woman had?  But this was the hour when Tunisian women did their shopping. 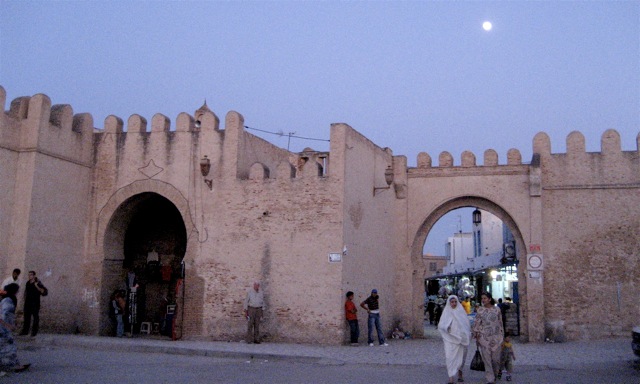 We left the café and walked about that section of the town outside the medina’s walls.  There were sidewalk cafés everywhere and all were filled with men, drinking coffee, smoking hookahs.   I was delighted.  Tunisia was living up to what I’d been led to expect.  Few women wearing chadors or the veil.  A theoretical equality between women and men.  But still a separation of the sexes. 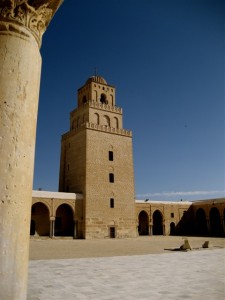 The courtyard of the mosque at Kairouan 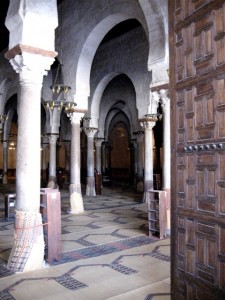 Inside the mosque: no two pillars the same

The next morning we visited the magnificent Kairouan mosque, with its enormous courtyard and its 400-plus columns, no two alike.

We drove north to Maktar where we had the impressive Roman ruins to ourselves, got fruit for a roadside picnic at Kesra Nord and on to El Kef.

After dinner there we walked up to the casbah, a great fort sited high on a rock outcropping.  The gate to the fort was closed.  We expected as much.  Suddenly it opened.  The gate-keeper beckoned to us.  We and two other couples, Arabs, entered the fort.  We climbed around the battlements and watched the sun set, the light leave the sky.  I admit it.  I kept checking on the two couples, both perhaps in their early 30s.  Were they Tunisians?  If so, what were they doing out as couples, acting as naturally together as American couples?  Baffling!  I was pleased to see them together.  As an American I assumed this was the way men and women were meant to be: together.  But why weren’t these couples acting as I expected them to act? 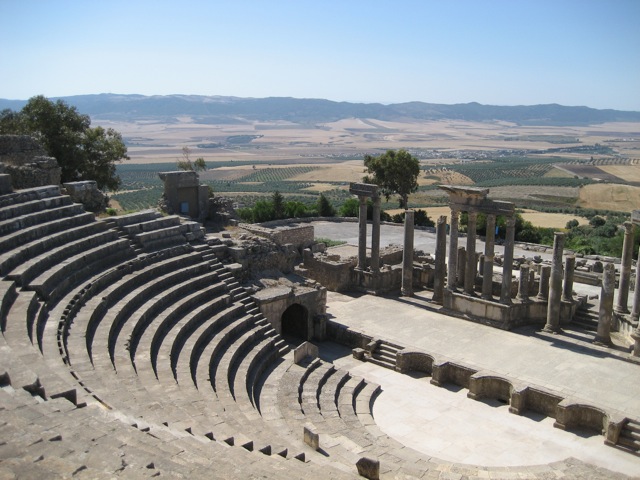 The Roman amphitheatre at Dougga

The next day we visited Dougga – more Roman ruins – and Bulla Regia, an ancient Roman farming community notable for its underground dwellings.  To escape the heat houses there were built below the surface of the earth.  We visited one.  It featured a stunning mosaic of Venus flanked by centaurs.  Arriving there at 3:00, 3:30, we understood the advisability of refuge from the heat.  It must have been 20 degrees cooler at the Venus mosaic than it was on earth’s surface.  And it was still only May.

But what struck me about Bulla Regia was what we encountered in the first ruin we entered.  Students were waiting around outside this ruin, presumably for a ride to pick them up.  Inside were a young man with a slightly younger girl, late teens.  Sitting on stones, talking.  We moved on quickly.  But I kept wondering: What?  Why?  How come?  Is this wise?  (But who cares about “wise” when you’re 18?)

So what to make of these sightings?  Who knew?  Were traditional social mores under challenge by the young?  Aren’t they always?  Did the foreign traveler know what he was seeing?  Does he ever?  Aren’t the nuances always too complex for him to fathom?  However misplaced these musings, they were preferable to thinking that everyone who was different must be an Al Qaeda terrorist or a suicide bomber. 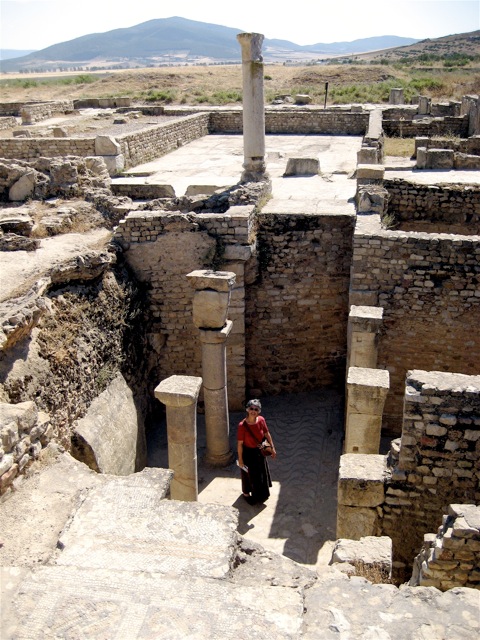 Donanne in a below-ground house in Bulla Regia

The next day we drove back to Tunis.  After a quick visit to the Bardo Museum, we had dinner at Dar el Jeld, a splendid restaurant in a house in the medina. We sat on a balcony, overlooking the main floor of the restaurant.  Eventually three couples, two mature, one young, took seats directly below us.  The older men began to gesture as if expounding to one another their accomplishments.  Ah ha! I thought.  The two young people have agreed to an arranged marriage, a profitable union.  The two fathers are showing off for one another.

And then I thought: Oops!  You’re doing it again.  Stop!  Just enjoy the view!