Sometimes, unexpectedly, a country calls you.  Tunisia called us.  We – Fred and Donanne Hunter – had never been there.  We felt we must go.  Here’s the first of our two-part report:

Even though I’d been warned that there was “nothing to see there,” I just had to visit the ruins of Carthage, the civilization Roman soldiers eradicated in 146 BC at the end of the Third Punic War.  Tunis is nearby, across a lake, and apparently has been from time immemorial.

But it turned out that what most interested me was how Tunisian men and women acted in relation to one another.  I was never quite able to decide if what I saw accorded with what I’d heard.

We came from Italy.  Italians have an extraordinarily expressive society – and apparently have had from time immemorial.  Men and women are interested in one another as sensual beings.  Some people believe Italians are sensual because they’re southern, because the climate is so warm.  Others say it’s because they’re Latin; it’s the pagan blood.  At an open-air performance of Euripides Eracle in the theater in Siracusa where some of Aeschylus’ plays were first performed, we sat behind a group of secondary school students.  Before the play began, the young girl sitting directly in front of us stared relentlessly, silently, tormentingly at her boyfriend.  She was giving him “the works.”  He gazed at her confusedly, pleadingly, and whispered with urgent supplication.  “The works” worked.  They spent most of the play in passionate necking.

Tunisia is even further south.  Its climate is even hotter.  But Tunisians are not pagans; they’re Muslims.  I’d heard that men and women existed in totally different social worlds.  Was this true?

We arrived at La Goulette by overnight ferry from Palermo.  It was about 6:00 a.m.  My notes record: “An orderly process of getting off the ferry, going through immigration and customs, much better than the humiliating process in Palermo port.  As we exited customs, cab drivers dunned us for their services.  I bargained with a tout who led us to what was obviously a gonzo cab, not a yellow vehicle as all cabs seem to be, but a dark red, rather beat-up vehicle.  Once we got in, the tout said, “Isn’t there anything for me?”  I gave him a single euro coin I had and assured him truthfully, ‘C’est tout ce que j’ai.’ [‘That’s all I have.’]  He looked unhappy, but what could he do?”

The streets were empty.   Was it a Western Sunday, a day of rest, or an Arabic Sunday, a regular workday (mosque attendance being for Friday)?  We couldn’t tell.  The gonzo cab pulled up across the road from Hotel Maison Blanche, a five-star bargain a bit out of the center of town.  The driver seemed mystified when I offered him a thirty-dinar note.  (This is like giving a New York cabbie a thousand-dollar bill.)  Donanne and I crossed over to the hotel and explained the situation to the receptionist.  “Votre taxi,” asked he, “c’est la voiture rouge?  Ce n’est pas un taxi.”  He sent the bellboy with the thirty-dinar note to arrange things.  He ran over to a nearby Agip gas station.  No deal.  He and the driver began to stop taxis, asking for change.  Eventually they got it worked out.

At the hotel restaurant we signed for quite an opulent petit déjeuner, used the toilettes and headed down to Mohammed V, the nearest tram stop, got tickets and rode to Place de la République, a central tram station.  We walked from there to the medina and did the walking tour suggested in the Lonely Planet guidebook. 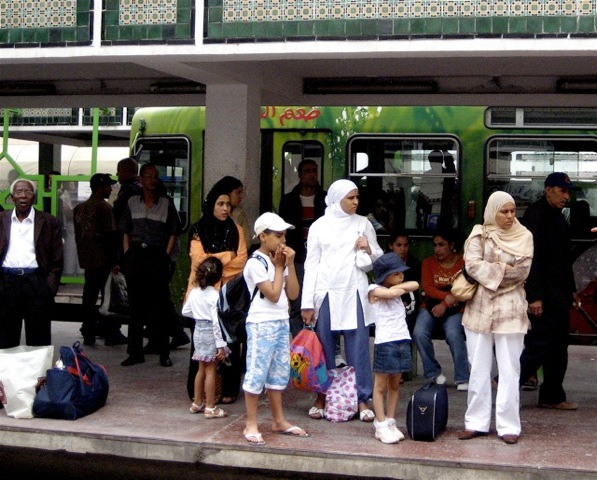 A Tunis train platform at République

The medina’s an invigorating place: narrow passageways fragrant with spices, tight-packed and noisy.  Vendor booths crowded out from each side of the passageways, selling everything under the sun.  People jostled past.  Children scampered.  Shoppers and merchants bargained outside stalls.  Guides led tourist groups along, mainly Germans, I thought.  I was glad that Donanne and I were exploring on our own.  Fortunately, the souk streets were mainly marked; we were following Rue de la Kasbah.

At the far end of the medina, we detoured past six or eight children musicians – violinists – who were apparently serenading tourists.  We rewarded them with  a dinar.  They giggled with surprise.  Walking on we realized we were in the environs of a music school; the kids were just practicing. 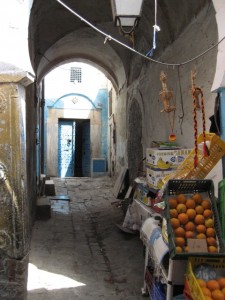 We rested in the Place du Gouvernement beneath the offices of the Prime Minister and the Ministry of Finance.  Back inside the medina we passed the structure where in 1332 was born Ibn Khaldun, the great wise man of his age.  He succeeded in being, all in the same package, an astronomer, economist, historian, Islamic scholar, Islamic theologian, hafiz (a Muslim who has committed the Qur’an to memory), jurist, lawyer, mathematician, military strategist, nutritionist, philosopher, social scientist, statesman and the father of social science.

Then down the long Rue Tourbet el-Beg where boys were playing hide-n-seek  and one was running with a propeller twirled by the air currents he created while verbalizing the roar of an airplane.  As we searched for the Rue Sidi-Kacem, we stopped to watch a small boy buy a chicken for his mother at a stall where the dressed carcasses were handsomely displayed.  We watched the vendor section the bird for the kid.  Going on, we decided we were lost.  We asked a kid, 10 or 11, to extricate us and, as he did, he inquired if we were Espagnol.  When he led us to the right passage, D gave him three coins and we went through the Rue des Tenturiers, turned into Rue Jemaa Zitouna and left the medina. 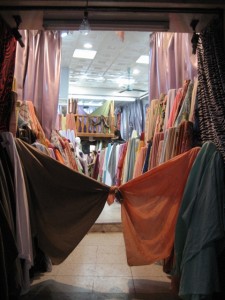 After Sicily with its Latin expressiveness and ads everywhere for Calzonia bikinis on barely clad women, it was striking to see how infrequently Tunisian men and women touched.  There was no flirtation.  (We observed this, after a lunch of falafel sandwiches, as we sat on the terrace of the elegant Grand Café du Théatre raised above the sidewalk of Avenue Habib Bourguiba, the main thoroughfare of Tunis.  There we drank hot chocolate: lovely, thick, sweet, warm – in other words “to die for” – served by a very nice waiter.)  A man rarely touched a woman’s back or arm.  No man’s arm encircled a woman’s shoulder.  No man reached for his companion’s hand.  A blond woman, probably American, left the Grand Café with a Tunisian man.  In the companionable gesture of the young in her country put her hand lightly on his ass.  He gave her no gesture of encouragement; she pulled her hand way. 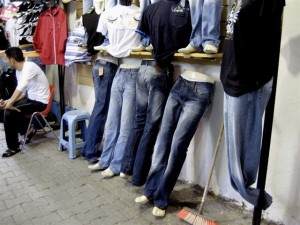 A strong wind came up.  We walked back to République, got the tram for Mohammed V and finally took possession of our room.

From my notes: “Room 585 of Maison Blanche is quite splendid.  A large bed with gold Solomonic pillars at each corner, a couch faced by two chairs, a table at which I’m writing, a desk at which D has been reading, two large closets and an elegantly tiled bathroom suite (what else could one call it?) with a basin and counter space at each side, a bathtub and a separate shower as well, of course, as a toilet.  Quite a find, this Maison Blanche!”

The first thing we noticed on leaving the hotel the next morning: Mondays in Tunis are quite different from Sundays!  The trams were crowded.  Traffic jammed the streets.  We took a tram to TGM, the station where you buy tickets for transfer to a line extending to La Goulette, Carthage and Sidi Bou Said.  A 30-minute ride across the causeway that transects what our map calls Lake Tunis, quite an extensive body of water that separates Carthage from the Tunis that has always been there, even in Carthaginian times.

Off at the Carthage-Hannibal stop, we walked up Byrsa Hill, according to legend and the Aeneid, the site of the ancient world’s greatest real estate coup.  Legend holds that, arriving in North Africa as a refugee from Tyre, Queen Elissa/Dido, asked the local inhabitants for a small bit of land for a temporary refuge, only as much as could be encompassed by an oxhide.  They agreed.  She cut the oxhide into such fine strips that it encircled the entire hill (“Byrsa” means “hide”).  What’s more likely is that the Phoenicians set up a trading post on this coast.  It possessed a rich hinterland, grew into Carthage and acquired Sicily and implanted colonies along the North African coast and in Spain. 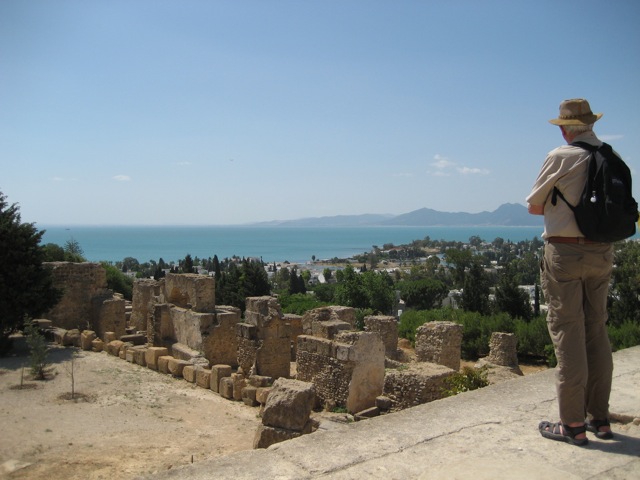 Admiring the Gulf of Tunis from Byrsa Hill

Whatever the legend, the hill served as the administrative/ceremonial center of Carthaginian/Punic life until the Romans erased that civilization.  When they returned a century later, they also anchored their city to the site.  Today a large, apparently little-used Catholic church of cathedral-size stands on the edge of the hill dedicated to a French saint-king who died on the beaches of Carthage in 1270 during the ill-fated eighth crusade.

What we know of ancient Carthage was written by the Roman victors who obliterated its civilization after a three-year siege.  The Romans’ sack of Carthage was excessively brutal, killing and enslaving the population, razing and burning the town.  But it’s unlikely that the Romans sowed salt on Carthaginian fields, as they’re said to have done, destroying forever their productivity.  Romans colonized Punic lands at the time of Julius Caesar and established a thriving agriculture there. But the sack was thorough.  The local museum’s Punic remains are quite literally only shards.  Items from the Roman period are more extensive.

What can be said of Byrsa Hill is that the view from it, looking south across the Gulf of Tunis, is one of the most beautiful in the world.

A cab took us to the Hotel Dar Said where Peace Corpsmen got their initial training for Tunisia 40-some years ago.  The hotel, quite fancy and not our style, does not serve meals to non-residents so we could not lunch there.  We walked down through Sidi Bou Said, once quite a charming place apparently, now overrun by well-heeled tourists.  We looked in vain for lunch places, then sat in a park for a while.  There we saw something unusual for Tunisia: a youngish couple wrestling with emotional trauma.  The woman had her hijab-covered head resting on the shoulder of her husband.  When I mentioned to D that their touching seemed unusual, she said she’d noticed the woman crying.  At first the man comforted her; later his body language was all anguish and unhappiness.  (I wondered if he were taking a second wife and they were dealing with that.)

From my daily notes: “We had hot chocolate again at the Grand Café du Théatre.  Observed more touching today between Tunisian couples, but still very restrained.  A lot of men seem to travel in groups, especially high school and college-age men, but this may not be different from cultures elsewhere.

“Came back to the hotel via tram.  The receptionist Donia said we could leave luggage here while we are out of town for three nights starting tomorrow.  It would be nice not to have to lug both bags around Kairouan and El Kef.”

And so we were ready to leave Tunis and see some of the rest of Tunisia.

Next post:  A look at rural Tunisia and many Roman ruins.