When we returned to Victoria Falls in late 2001, thirty years after our first visit, the Falls were as impressive as always.  Traveling with Donanne and me were our son Paul and his friend Bill, both in their late 20s.

The country that had been Rhodesia was now Zimbabwe, ruled rather disastrously by the longtime President Robert Mugabe, formerly a freedom fighter, and his cronies.  The town was more “developed.”  It had become a kind of African Disneyland.  (Africans have as much right to a Disneyland as Americans and here the waterfall isn’t turned off when the park closes. There were tethered balloon rides and the bungi jump concessions.)

At Illala Lodge where we stayed Donanne stopped an Indian woman in the hall to ask where she’d gotten her dress.  This query provoked an outpouring of talk.  The woman was the third generation born in Africa; her husband’s father came from India.  They have a shop in Bulawayo and a son at university – “at varsity” – in Grahamstown, South Africa.

Highlights of this conversation as related to me by Donanne:

Indian shopkeepers are harassed with taxes and other levies.  IRS-type inspectors can visit the store at any time and check the accounting.  Apparently the couple withdraws a certain portion of the receipts regularly to have something to fall back on.  Their parents are very pessimistic, ever conscious of the mass deportations of Asians in Uganda in the 1970s.  In fact, the woman said, there were rumors that once the European farms were all distributed to Africans, the shops would be next.  Her husband insists they have much to be grateful for.

A story about a portion of a European farm that grew oranges.  Part of it was given to an African who had no training – nor interest – in the care needed to make an orchard produce.  Said the African, “I’ll never have to worry about firewood again.”  And he cut down all the trees.  It galls non-Africans that those receiving the land have had no preparation in how to make it fruitful.

The woman’s brother is an orthodontist trained in the UK.  Apparently he had a practice there.  Decided to return to Zimbabwe to be the country’s second specialist in his field.  He told his sister he intended to do everything strictly above board; that was how he’d practiced in UK.  He submitted his papers for a license and heard nothing.  Several months passed.  Finally he asked health officials, “Don’t you want another orthodontist in your country?”  Later he received a phone call from the relevant minister.  The minister said, “I will be in such-and-such a hotel in Harare on such-and-such a day.  Why don’t you come see me?”  The orthodontist went to see the minister who said, “Your license is ready.  How much are you going to give me to get it?”  So the orthodontist learned that you cannot always do it in Zimbabwe the way it’s done in UK.   He is now practicing in the country. 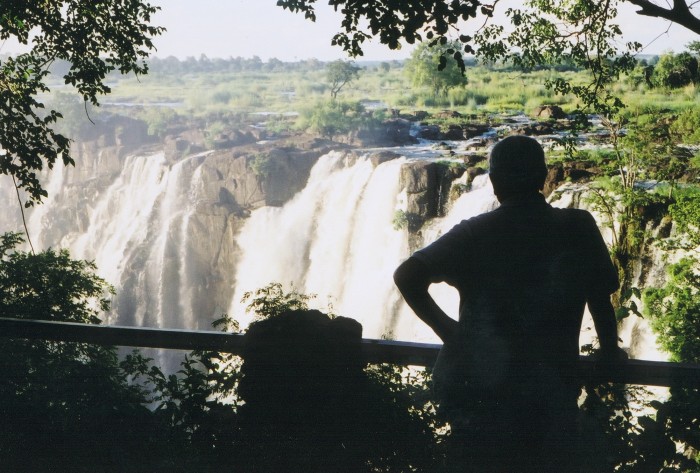 The Indian woman says the prices are terribly inflated in Vic Falls, but we have already figured that out.   She says visitors come from everywhere.

The woman’s son had a minor scrape with the police for going five miles per hour over the speed limit.  They won’t let him pay a fine; they insist he appear in Harare, the capital.  The son loses the summons, then finds it, tries to straighten it out in Bulawayo, but it’s all bureaucracy and petty harassment.  An ongoing saga.  The woman fears that her son will be subject to Friday night arrest, a police harassment ploy.  The arrestee is jailed for the entire weekend and can’t extricate himself till Monday.

D told the Indian woman how surprised we were to see so many Africans who seemed middle-class.  The woman said there were nouveaux riches.  She mentioned seeing them eating in the Kingdom Hotel dining room and dropping refuse under the tables.  Obviously many Africans are just beginning to learn how to behave in a manner that reflects their wealth.  The Indian woman thought it more a matter of education than race.  Television is a great teacher of how to behave, what to wear, what attitude to assume.

The woman expressed nostalgia for the times when everyone knew where he stood.  An informal kind of apartheid existed in Rhodesia.  Her family lived in an Indian neighborhood in a house smaller than the one they now occupy.  But they were happy.  At least that’s how she sees it now.  Then one knew the sort of people one’s children were likely to marry.  Now with freedom that’s all changed.  And there are drugs, too.

Friends vacationing across the Zambesi in Zambia called to suggest we join them for the night at Songwe Point Camp where our lodging would be comped by the hotel.  So we crossed the border.

Lovely to walk in the late afternoon opposite the Falls on the Zambian side.  The viewing there is divided almost equally by the Knife Edge Bridge, a solid metal structure which spans about 25 yards of chasm.  Not being a heights person I came close to crawling across the bridge.  Fortunately, I managed to master my fears by staring at the center of the bridge, avoiding looking into the abyss.  Across the way we saw four white guys with three Africans, sitting on the very edge of the Falls at a natural pool there.  Several of them swam.  Bill clearly wished he were with them.  In fact, the longer we watched the guys, the more enviable their situation appeared – even if it involved unreasonable risks.   When we returned from the end of the overlook, the daredevils were gone.  I could not even distinguish where they and their pool had been. 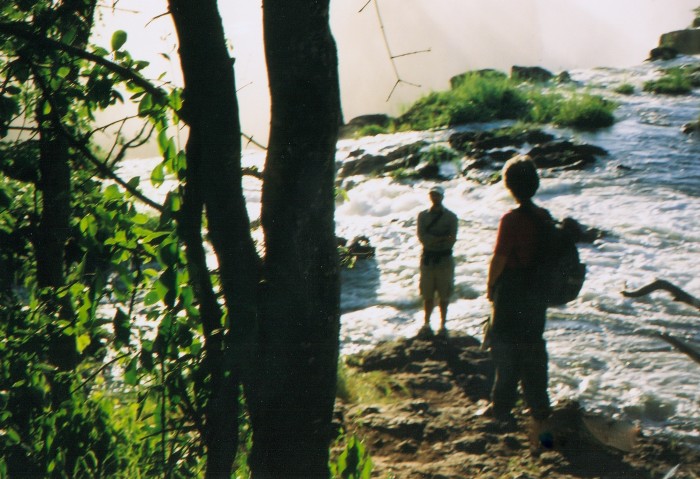 Paul and Donanne on the Zambian side of the Falls, almost at their edge

Songwe Point Camp represents an attempt to place high-end accommodation in an African village setting and to give guests an authentic African experience.  Thatched rondavels have large beds (like ours in Botswana camps) with mosquito nets (though no air-conditioning).  The bathrooms are in separate rondavels open to the air (under thatch), offering great views of the Zambesi Gorge off Songwe Point.  Villagers boast that these are the best bathrooms in Africa.  I wondered how American travelers would respond to the camp.  Paths between rondavels were rough and root-infested, hard to walk on, especially at night.  We ate outside in a large circle of chairs.  Dinner was served from a buffet with cooking pots over a fire.  There were flashlights to help us see what we were eating. But without a table it proved hard to cut food on our laps.

At Songwe Point all camp jobs except for manager (held by Africans Gabriel and Juliet who have three small children) were staffed by Songwe villagers.  A portion of each guest’s fees goes to the village (pop. 2000).  It boasted a newly-built village primary school, complete with accommodation for staff.  As the school pupils advance, new facilities will be built for them.  A junior secondary school is slated for construction next year with full secondary school to come.  Also talk of a clinic.

The free lodging turned out not to be available.  Paul and Bill responded positively to Songwe.  They decided we should spend the night – even at US$85 a head. Apparently there was to be some kind of dancing later on.  However, as we were trying to work this out, manager Gabriel realized that because he’d gotten day-pass visas for us to enter Zambia he faced bureaucratic difficulties if we stayed the night.  (Overnight visas US$25; we’d paid only US$10.)  I couldn’t tell if this was muddle in a situation Gabriel hadn’t previously encountered (quite possible) or if we’d given offense.  I’d spoken briefly with Gabriel; he seemed intelligent, interesting and well-spoken.  His wife Juliet briefed me about tribal customs.

In any case, once Gabriel decided we really must get back over the border, we cut dinner short in order not to get caught in the border closing.  On the Zambian side only two officials manned the immigration shack.  When we finally got one’s attention, a large drunk African inserted himself into the window where we were being helped.  We got our passports and crossed the bridge to the Zimbabwe immigration shack just as they were closing up.   I gave our Songwe driver Zim $5000 – a nice tip – for I was immensely grateful to get back into Zimbabwe.  Didn’t care to spend the rest of the night on that bridge!

As we trekked back into town through the darkness, listening to the sounds of nature, I toted the backpack that carried D’s and my overnight stuff.  Two young African women passed us and sang out greetings.  They were headed – in jeans – to the Kingdom and rock and roll!  We changed our clothes at Illala and at Paul’s suggestion went over to the Vic Falls Hotel to revel in that suffocatingly colonial atmosphere we both deplore and luxuriate in.  We watched the moon as we ate dessert on the terrace.

The next day transfer to Johannesburg.  What a glorious sky – clouds!  What fantastically vibrant colors!  Paul left that night for Paris via South African Airways; Bill went to Amsterdam via KLM.  Great traveling companions.  Sorry to have them go.

Next post: Join us in Malawi where JOSS The Ambassador’s Wife takes place.

In three weeks TIA runs out of Hunter accounts of African travel.  Time for you to offer your accounts.  I already have two: one from a diplomat, the other from a Peace Corps volunteer.  I’ll start posting them in another month.  Please make it possible for TIA to broaden its scope.  Write up an account.  Or send an excerpt from a letter or a memoir.  Indicate the date when it occurred and how you happened to be in Africa.  I’ll post the accounts as I receive them.  I’m excited about hearing from you.  TIA readers eagerly anticipate your accounts.  Send them to: FredericHunter@gmail.com.