This week’s guest contributor, Pamela Hussey, lived in Nairobi for 4 years in the early ‘80’s where she served as USAID Regional Director of Housing and Urban Programs for East and Southern Africa—a job which spanned 17 countries.  She returned to Africa for two years from ’86-’88 where she was based in Harare, Zimbabwe and wore two hats as Deputy Director of the USAID Mission and also directed USAID’s Southern Africa Regional Program which covered 9 countries and focused on rehabilitating ports and railroads in those countries.  In Nairobi she worked with the City Council in overseeing 4000 affordable housing units financed by the U.S. private sector and had a number of opportunities to meet with the mayor of Nairobi who thought he had just the job for her…

Nathan Kahara was the Mayor of Nairobi and incredibly handsome—a cross between a young Harry Belafonte and Sydney Poitier.  Soft spoken, gracious, with a brilliant smile, he never failed to pique my womanly appreciation. 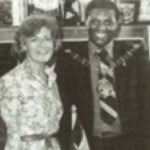 He was only a few years older than me, but his official title was “Your Worship.” Along with this rather papal-sounding designation, the Mayor of Nairobi had several other perquisites of office. One was a very large silver chain with an even larger star pendant on the end that he wore around his neck for ceremonial occasions, which were quite frequent. The chain, which was heavy enough to cause lethal damage if misused, rested on a white cotton dickey with scalloped edges. When it was all put together it had a sort of Pirates of Penzance look. It sometimes distracted me from focusing on the fact that the city of Nairobi was often broke and desperately needed the affordable housing my office promoted and funded. 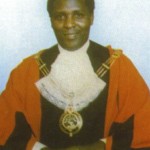 The second feature that added a note of luster to His Worship’s office was that he was transported everywhere in a reconditioned Rolls Royce. It was painted black and always waxed and shiny. What caught your eye were the red velvet curtains with velvet ties gracing the windows. This was quite an unusual sight and gave one pause.   I only rode with His Worship in the back seat of this car on two occasions and I was very relieved that on both occasions the curtains remained open.

During my four years in Nairobi from 1979-1982, Nathan and I got to know each well enough to be on a first name basis with each other. At the time, I was Director of Housing and Urban Programs for East and Southern Africa for the U.S. Agency for International Development.   We had built a large development of 4000 small, affordable homes for the working poor in Nairobi called Umoja Estates.  Even after it was completed, the problems required numerous meetings to ensure the houses were fairly allocated and the mortgage billing and collection systems were being properly implemented. I was constantly sending a staff member to the City Council to help sort out problems.   It was hard going and when things broke down, I would weigh in personally and pay a visit to the Town Clerk, and on occasion, His Worship. 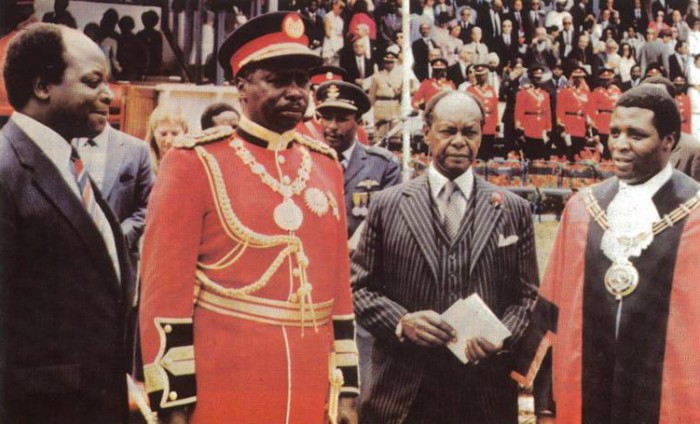 On one of these visits to His Worship we were sitting in the Mayor’s Parlour discussing housing issues. The only way to describe this Parlour is an emporium of velveteen—red velveteen settees, yellow-gold sofas, lime green velveteen armchairs. And everywhere there were little wooden side tables with white crocheted doilies covering them. It was a setting in all respects for a cabaret. I was always expecting a red-hot mama to come prancing out in black fishnet stockings and a shocking-pink sequined bodice kicking up her legs and belting out a come-hither song.

In the middle of our discussions, which I thought were quite serious, His Worship suddenly turned to me and remarked, “You know, Pamela, I am thinking of redecorating the Mayor’s Parlour.  I think it needs to be upgraded.”  I was a little startled at this turn of the conversation, but tried to be gracious and responded, “Yes, that would be a good idea. A more elegant and contemporary look would suit this room.”  His Worship then paused and looked at me in all earnestness and said, “Pamela, I think you would do an excellent job at redecorating the Mayor’s Parlour. Would you take on this task for me?”

I was now more than a little startled!  First, we were in the middle of a serious policy discussion and there was just no segue into this proposal. Secondly, as a feminist, I immediately wondered if I were a male official, would such a proposal have been proffered? Very unlikely!

Then surprisingly, the third thought that came to me was, “I’d love to get my hands on this Parlour!” That was a bit shocking to me but it was true. I love beauty and graciousness, a love bequeathed by my mother who always had a great eye for beauty. The opportunity here was not trifling. Just the thought of turning this rather sleezy parlour into a modern, well-appointed reception room began to stir my imagination. I started thinking about fabrics and color schemes and how I could meld elegant, contemporary furnishings with indigenous wood. How I would go to the Watatu Gallery in Nairobi and select interesting African paintings–and would have the incomparable pleasure of hanging them at eye level instead of six inches below the ceiling as paintings are hung in Africa.

I was quite lost for a moment in the reverie of possibilities. I also knew I could do it. And the result would be quite satisfying. It could be my legacy to the city of Nairobi. “Oh yes, Pamela–wasn’t she the woman who redecorated the Mayor’s Parlour?”

Then I awakened. It would not do. It would just not do. There was the matter of my portfolio, a bulging array of projects and proposals throughout this vast region spanning 17 countries. I just could not call my boss in Washington and request he approve a little reordering of my priorities so I could redecorate the Mayor’s Parlour in Nairobi.  And then there was the issue of preserving the dignity of my office.  I was the first woman to head an overseas regional housing and urban programs office and there was a lot of weight on my shoulders to demonstrate I could do the job as well as a fellow.

A little voice inside me whispered, “No, I’m sorry, you cannot accept this job offer as the Mayor’s interior decorator.” So I diplomatically demurred and of course thanked His Worship for thinking of me for such an important and interesting task.

And I’ll tell you this, there were many times when I was slogging it out in quite undeveloped towns in East Africa or waiting for endless hours in hot, dusty waiting rooms of rural airports, when I wished I had said yes.   “Celadon or sage?”   What pleasure to have such a question posed!

Next week: A frequent traveler to East Africa relates her most memorable safari moment.