David Winder served as a foreign correspondent for and the assistant managing editor of The Christian Science Monitor. After leaving journalism he became a professor of history.  His first experience in lecturing to students came in Pietermaritzburg, South Africa, where he grew up – as he explains in this essay.

Some recollections of South Africa when I was a politically active student in 1960.  It was at a period of high tension with a state of emergency declared and draconian measures taken to suppress anti-apartheid protests. Massive pre-dawn arrests took place throughout the country and I can recall the chill that run down my back one day when, on arriving for Peter Marsh’s Shakespeare class at the University of Natal in Pietermaritzburg, Mr. Marsh did not appear.  Within minutes another English professor entered the classroom and told us: “I regret to announce that Mr. Marsh will not be able to attend class today. He was arrested by the Special Branch (Police) early this morning. Under the Declaration of Emergency his arrest cannot be announced.”

The Natal Witness, the local newspaper, which also happened to be the oldest newspaper in South Africa, reported the state of emergency but there were large blanks in some of the pages to draw attention that the paper was forbidden to publish of the names of those arrested.

One of my friends, like me a member of the Liberal Party, frequently sat next to me in my English Lit. class. He was not a radical even though the Liberal Party stood for a universal franchise which the apartheid government equated with communism. In this period of high tension the newspapers highlighted an act of sabotage: A bomb placed in a suitcase in the Johannesburg Railway Station exploded. There were fatalities.

The press later listed my friend as one of those arrested. I was shocked to think that my friend had been involved. I knew him as John Lloyd. When the case came to court he turned state’s evidence. I was convinced he must have been tortured and forced to testify. He won his release, but those who were sentenced vowed they would avenge this betrayal.  In the circumstances he felt obliged to change his name to avoid identification, and fled the country. I never heard of him again. 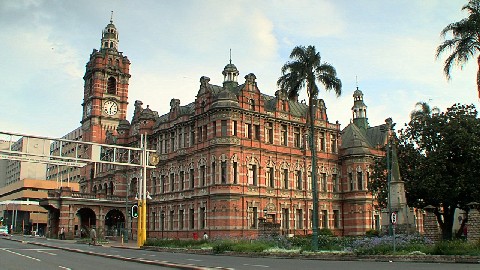 Opposing essentially a police state in the 1960s inevitably brought great risks. My opposition to the apartheid regime prompted me to volunteer teaching English in the evening in an African location.  This was the designation of a community restricted to Africans and off-limits to whites.  Any who entered would be regarded as subversive and subject to arrest and regarded as a political agitator or a Communist if discovered. Since I could not drive into the location, my only way to enter the African community was to board an Africans-only bus and then creep under the row of seats at the back. African passengers made sure I was carefully concealed should the police board the bus.

On arrival I would lecture in a local community building. A couple of Africans would stand guard outside the building.  If any police appeared to be checking the community building, they would emit a low whistle, and the students would stuff me in a cupboard until the coast was cleared and I could continue the lesson.

I was never detained as a political suspect, but had been photographed during protest marches, and was obviously known to South African police. Some years later when I had left South Africa, but still had a South African passport, I decided my American family should  visit. I was then working for an American newspaper and, even though South Africa was still under apartheid, I decided to write a retrospective on my earlier career in South Africa. When I interviewed the head of the Interior Department, responsible for interior security, in Pretoria, I introduced myself  as a South African journalist returning to offer my reflections on my country since I had left permanently. I had scarcely began my interview when the head of the department cut me short: “Oh, Mr. Winder we know you are here .” I felt a cold shiver down my back. Had they tapped my phone?  Were they shadowing all my movements?

But that was back in the ‘70’s. It’s different now

Elizabeth Selover, a Santa Barbara friend, sent her mother’s account of a trip she, her sister Madge and father David Alison took to South Africa in 1921.  It was published in The Christian Science Monitor in 1947, signed by Molly Alison Bliss.

“We sailed from Southampton one gray December day in 1920, a day of driving sleet, and 21 days later were in Cape Town under the hot summer sun.

“The Union Castle passenger liner had anchored off Madeira where we watched the native children dive deep under the clear blue water for coins tossed overboard by the amused passengers.  The deck had been transformed into a native market place with hand embroidered cottons and reed furniture.  A few days later the Azores had appeared on the horizon.  We didn’t know that 20 years later they would emerge from obscurity to play an important part in World War II.

“But it was Cape Town that really captured our hearts as we arrived in Table Bay – the range of the Twelve Apostles rising as it seemed from the ocean and Table Mountain exactly as our imagination had pictured it – the misty white tablecloth shrouding the summit.

The Alison family on Table Mountain: Madge, Molly and David

“In those days the only way to climb Table Mountain was on foot, so a few days after our arrival we set off at 8:00 o’clock in the morning with a native guide.  At noon we were standing on the ‘table,’ gazing down at the amazing relief map of ocean and coastline.  One of us burst out with, ‘Three thousand feet above the sea.  Oh, wonderful! Oh, happy me!’

“It seemed extraordinary to find orange gladiolus and other ‘garden’ flowers growing in their native haunt.  We ate luncheon away from the fierce sun in the shelter of a great rock, and later found a cairn of small rocks made by those who had climbed the mountain.  Exultantly, we added our own.”

Next post: An American family – father, mother, son – journey to a tiny village in Mali to visit their daughter/sister and discover that she has a new name.