Dave DeSelm, a retired architect now living in Santa Barbara, CA, relates what can happen to Peace Corps volunteers when they are just sitting on a rock.

One day, I was just sitting on a rock, sketching the interior ramparts of the old fortress, when I heard the chatter of school children. I looked up and saw a group of teenage Tunisian girls, accompanied by their teacher, coming thru the entry portal.   Since visitors often came to the citadel, I didn’t pay much attention and went back to my drawing.

So I took Jane and her students around the Byzantine-Hafsid fortress perched high on a hill overlooking the Mediterranean Sea near the town of Kelibia in northeastern Tunisia.  I showed them the crenellated walls, the towers, the entry gate and the dungeons, the lighthouse that guides ships on the Mediterranean between Tunisia and Sicily, the views up and down the Tunisian coast, the little stone courtyard house with the big gnarly fig tree that I shared with my Tunisian assistant – and the old cistern where we got our water.

“Why are you living here?” Jane asked.  “We’re drawing the fort,” I replied.  “Mohamed and I work for the Tunisian Directorate of Historical Monuments.  We’re surveying the structure and making drawings of its existing condition to help preserve it.”

“What are you doing in Nabeul?”  I asked.  “I teach English as a second language at the Lycee,” she said.  “I really love the students.”

We discovered that we’d both been in the same Peace Corps training program on the H Bar G Ranch in Estes Park, Colorado, the previous summer.  (We trained up in the Rocky Mountains for life on the edge of the Sahara Desert… go figure.)  But in Colorado, she’d studied Arabic, while I’d studied French.  We had not crossed paths – until now. 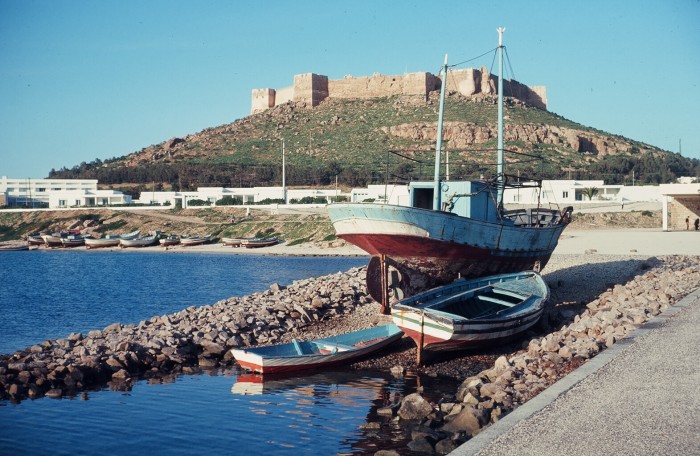 As she got ready to leave the fort, Jane waved goodbye and said “You should come to Nabeul some time.”  The fact was, I’d already been to Nabeul several times, visiting two other Peace Corps volunteers.

We had no running water in the fort – just what we could pull up in a bucket from the old cistern.  No faucet. No shower.  But we did have a one-hole Turkish toilet.

We had no real food supply at the fort either – just a small rural store in the little fishing village on the waterfront below the citadel that sold canned goods, local bread and giant bottles of Coca Cola.  Mohamed was the cook.  He started every meal by heating some olive oil and tomato paste in a frying pan, then mixing in whatever other ingredients he could scrounge from the local store – and farmers around the fort.

On weekends, I walked down the donkey trail to the highway and took the local Tunisian bus to Nabeul to hang out with my friends, Dick and Ann.  I’d use their shower, get some good home cooking, and sit around and talk.

Of course, Dick and Ann knew Jane…  The next time I showed up in Nabeul to see them, Jane was there too!  A couple of weekends later, when I went to Nabeul, there was a note on Dick and Ann’s door that said…

Sorry we’re not here this weekend.

Needing a shower, some good food and some good conversation, I went over to Jane’s house.   It turned out that her housemate was also gone for the weekend…

Four years and many shared experiences later, Jane and I got married.

So, you never know what might happen to you while you’re… just sitting on a rock!

Next post: An American diplomat is an unwelcome visitor at Victoria Falls.