Doug Knight served as a longtime US Navy doctor and biological researcher.  After retiring, he returned to his native central Ohio, resumed medical practice and served as a trustee of Otterbein College.  This account, the first of two, relates the beginning of a trip he, his wife Mary Pat and son David took to visit their daughter/sister who was working as a Peace Corps volunteer in the Malian village of Gondinko.  They discovered she had a new name.

My daughter is an American Peace Corps volunteer in Mali.  Her African name is Nana Suco.  It was by visiting Nana that my wife, son, and I rode the train to Gondinko.  The price of each ticket was $12.

Nana rushed us through Dakar’s train station to the section of first class coaches where we located our seat numbers marked in ink on the sheet-metal wall.  We stored our luggage in a rack directly above the seats, then inspected the car’s interior.  The coach was already inhabited by flies.  Our seats were cushioned with foam padding and covered with tattered sheets of vinyl upholstery.   The floor, walls, and ceiling were paneled with sheet metal.  The floor was protected with worn linoleum.  Walls were decorated with laminated artificial wood up to the windows.  The remainder of the walls and ceiling were painted with white enamel.  All surfaces were covered with 40 years accumulation of dirt.  Seams between metal sheets were covered with loosely attached strips of metal.  Windows were whitewashed to block the afternoon sunlight.

There was a mixture of odors that I couldn’t completely identify.  Some odors came from the French toilets at each end of the coach.  Water was a precious commodity that was not to be wasted on flushing toilets and wash basins.  Other odors will probably never be determined.  There was no ventilation when the train was standing still.  The ceiling fans weren’t connected to electrical wires and there were no ventilation ducts.  This would be our rickety home for the next 24 hours. 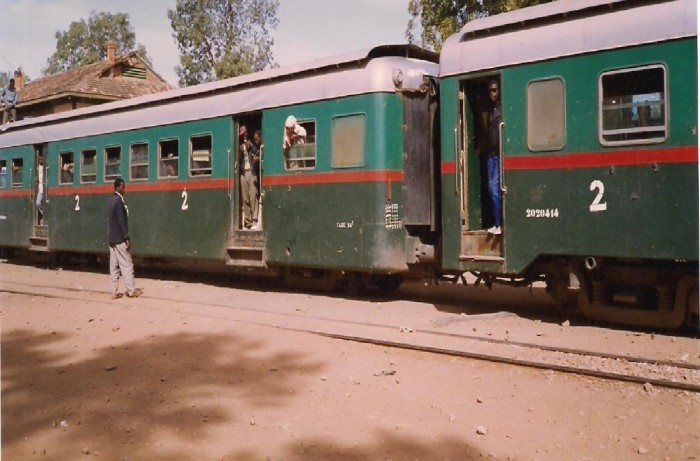 Then the African women started to board the train.  They wore colorful dresses wrapped with a waist band.  Mothers used the waist band to strap their infants against the lower back.  A scarf was wrapped on the head for protection against dust.  All of the women wore gold earrings, but very few wore lipstick.  The African men wore casual, western-style clothing.   About ten white people (tuabobs) boarded the train with hopeful anticipation of a wonderful vacation ride through the savanna of West Africa. 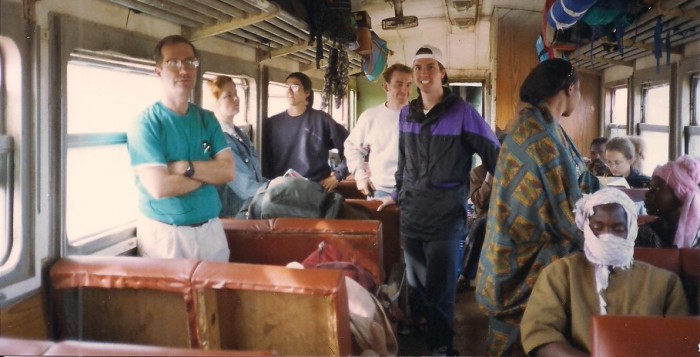 Our last chance to get off the train and fly back to America occurred at 10:00 am when the train began to accelerate to an estimated cruising speed of 45 mph.

The coach was ventilated by the natural convection of outside air through windows and doors.  The entire vehicle rumbled along with doors flapping open and people occasionally walking on the roof.  Body odors were not offensive, but cigarette smoke and the odors of strange food were bothersome.  The seasonal Harmatten winds were blowing dust down from the Sahara desert and into our coach.  The dust was so thick as to occasionally obscure the vision and plug the nostrils.  The Africans were prepared for dust and wrapped scarves over their faces.  Occasional brush fires along the road contributed smoke to our atmosphere.

The average life-expectancy in Mali is about 45 years.  I was therefore surprised to observe an elderly African woman riding the train with her daughter.  Both of them sat side-by-side for the initial part of the trip, but the elder woman soon became tired and spent the remainder of the long train ride lying at the feet of her daughter.  She could not have been comfortable because she lay on a thin floor mat in a fetal position so that her arms and legs did not extend into the aisle.  It was a difficult and tedious effort for her to walk to the toilet.  After several trips, she had to be helped by the daughter.  Then a strange gentleman offered assistance when the aisle became crowded with baggage from new passengers.  The Africans are very polite to strangers. 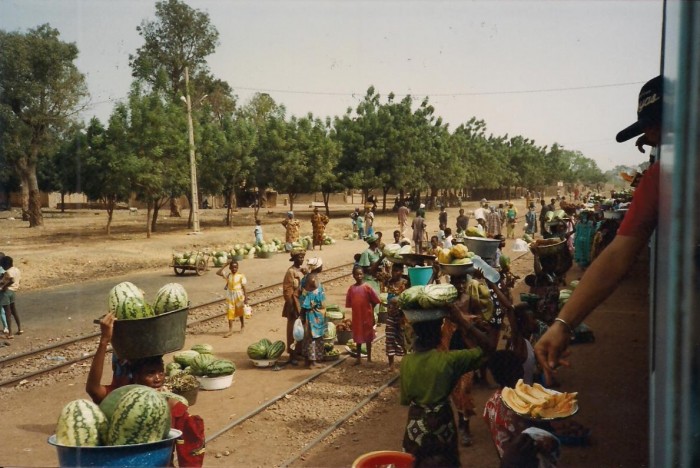 Vendors crowd the earthern platforms at every station stop

By 12:15 pm, the train pulled into Theis, Senegal.  I brushed the dust off the pages of my book and stood up to gaze out of the top of our white-washed window.  Vendors were swarming around the train to sell food, gifts, and travel items to the passengers.  Money was exchanged for goods through the tops of opened windows.  It made no difference whether the item or the money was passed first; the vendors and passengers completely trusted each other.

I spent the next 6 hours talking with my family and meeting other European passengers on the train.  I also watched the stoic soldier who wore sunglasses and a neatly pressed uniform.  He sat quietly and never smiled when soldiers of lesser rank entered the coach to seek his advice.

We reached Kuongheuhl, Senegal, at 6:00 pm.  Then the drunk cook walked through the coach announcing the service of supper in the restaurant car.  The main course was beans.  We declined the invitation in preference to making sandwiches out of the tasty loafs of French bread purchased from the vendors.

A loud woman boarded the train when the stoic soldier got off at Tambacounda.  It was now 9:00 pm and most of us were trying to nap while sitting in our seats.  The woman’s assistants rearranged the luggage rack to accommodate her goods and then placed her bags of rice in the aisle.  She eventually took interest in the Peace Corps Volunteers and began talking to them in the Malinke dialect.  Soon, the entire coach listened to her conversation with interest and delight.  Other passengers laughed when she offered to find a husband for Nana.  The conversation faded after customs officials collected passports from the passengers.

The train stopped at the border of Senegal and Mali at 2:00 am.  All passengers disembarked to retrieve their passports from the border officials.  Even at this hour, there was a bazaar of vendors who lit their booths with kerosene lamps.  I finally realized that the train is a source of retail sales for merchants at every station.  When I returned to the car, there was great excitement, angry shouting, and crowd activity near my seat.  African passengers were cursing and beating a man caught stealing from the baggage.  The police came to remove the thief. 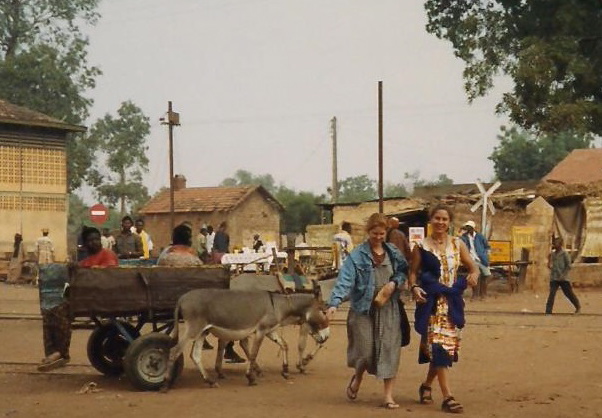 The train pulled away from the customs office and traveled into rural Mali under the light of the moon and stars.  It slowed to a stop in open country where we waited several hours.  Passengers built a fire near the train and used the light to talk to each other.  We stayed on the train because we were unfamiliar with the schedule.  Finally at dawn, the train resumed traveling to Bamako.  Our conversation was muted by fatigue and wonderment about the countryside.  There were shrubs, trees, fields, and a few anthills; no elephants or giraffes.  The farmers’ villages contained (round or square) mud houses with thatch roofs.  The train pulled into Mahina, Mali, at (10:00).  Kirsten, another volunteer, met us at Mr. Tembley’s gas station in the LandRover.  We loaded the truck and struck out for Manatali with Nana at the wheel.  Nana navigated around donkey carts and onto the railroad bridge in order to cross the river.  After we passed a group of baboons in the field, I began to realize we were in West Africa on a new adventure.

Next post: The Knights arrive at their daughter’s village Gondinko.