Doug Knight served as a longtime US Navy doctor and biological researcher.  After retiring, he returned to his native central Ohio, resumed medical practice and served as a trustee of Otterbein College.  This account, the second of two, relates the beginning of a trip he, his wife Mary Pat and son David took to visit their daughter/sister who was working as a Peace Corps volunteer in the Malian village of Gondinko.

My daughter is an American Peace Corps volunteer in Mali.  Her African name is Nana Suco.  It was by visiting her that I discovered an image of life in a primitive society.

Nana lives with the Malinke tribe in the Region de Kayes, Mali.  Because she is a guest of the village of Gondinko, it is the African tradition that she be housed and fed by an official host (i.e. Ja Tigi).  The only other way that she could live in Gondinko for two years is to become a wife and perform the work of a village woman.

Nana took my wife, son, and I to her village when we traveled through Mali in 1993.  We arrived at noontime and set up in Nana’s hut.  Se la Tigi Sissoko gave an introductory tour of the village that included a greeting by the Duga Tigi (Village Chief).  Upon returning to Nana’s hut, a woman brought us lunch of cooked millet and hot peanut sauce.  After lunch, we met the wives of Se la Tigi.  The first wife is Fille (about 50 years old) and the second is Tamaki (about age 35).  Se la Tigi’s nephew took us on a more extensive tour of the village. 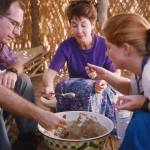 We took a nap and were awakened by the tom-toms (African drums).  They came to escort us to the concession where we were invited to sit on carved wood benches.  The youth presented us with dances and welcoming speeches.  We returned to Nana’s hut for a supper of cooked rice, broiled duck, and hot peanut sauce.  After supper, we returned to Se la Tigi’s house for conversation and singing.  About 8:00 pm, Se la Tigi took us to the council ring for more dancing.  The Chief made a speech in honor of our visit that was followed by more dancing.  Shortly after we left the ceremony at 10:30 pm, the tom-toms became quiet.

We ate a breakfast of cooked millet and bassi (hot-milk porridge).  Se la Tigi’s family ate our leftovers.  After conversing with his family, Nana took us to visit Fille’s peanut field where the village women were harvesting the peanut crop.  A lunch of roasted chicken, roasted sweet potatos, boiled millet, and hot peanut sauce was served to us at Nana’s hut.  Se la Tigi joined us for lunch while we ate African style (dip into the common bowl with the clean hand).  After lunch, the women and men came to say goodbye. 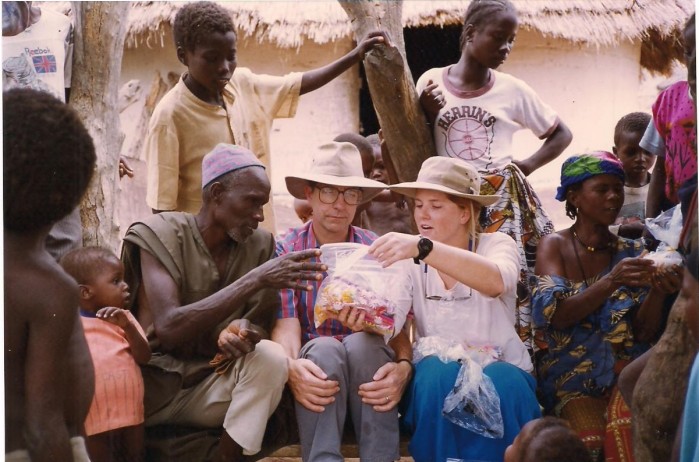 Meals were eaten outside on the dirt ground under the shade of a thatched roof.  A pot of food was placed on a stool and we sat on stools around the food.  We ate with spoons, but the African way is to eat with the clean hand.  The enamel pot was decorated with painted flowers.  Cooked grain filled two-thirds of the pot and a smaller pot of hot peanut oil was set in the middle of the grain.  Peanut oil was poured over the grain and eaten with the grain.  The meal was filling and could not be entirely consumed by four of us. 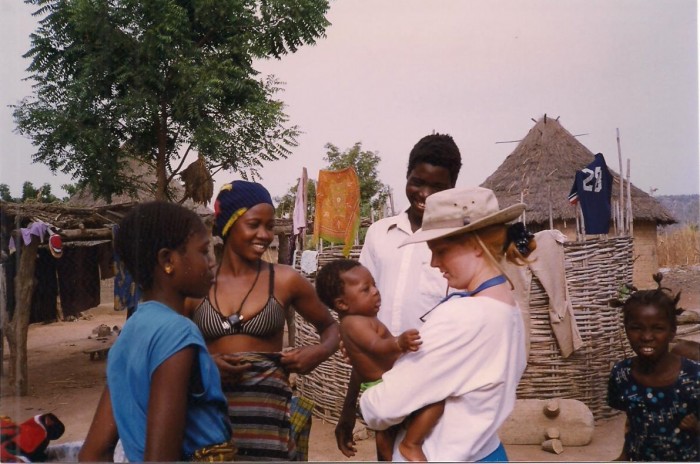 Julie holding a favorite friend among her Gondinko neighbors

The Africans either feast or famine.  Honored guests are served most of the best food available.  Nana normally eats 2 meals a day prepared by one of Se la Tigi’s wives.

Next post: Take a ride on a felucca on the Nile! 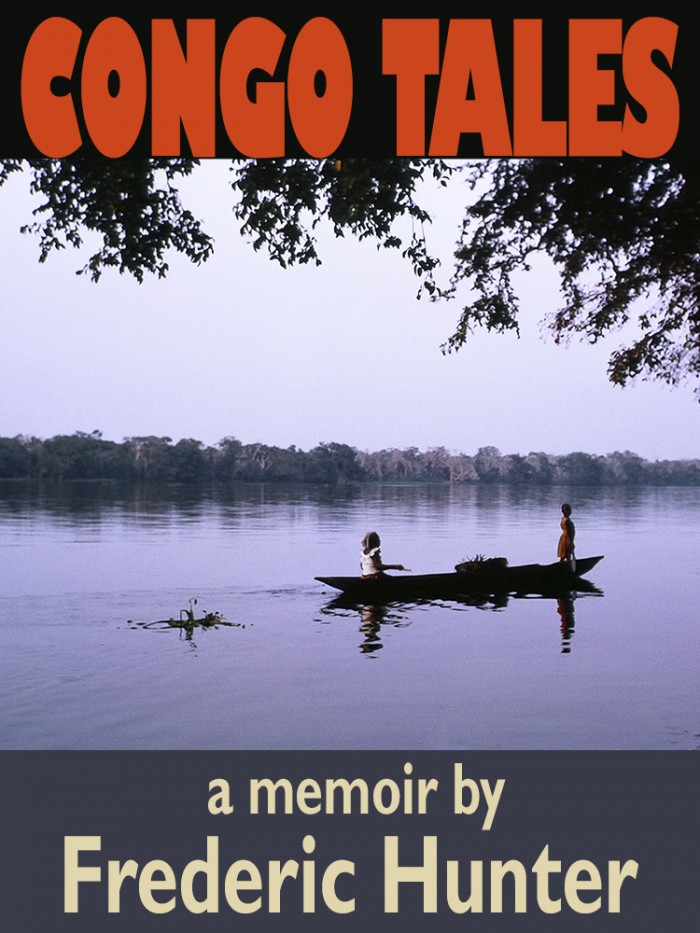 Fred Hunter has written a short memoir of his experiences in the eastern Congo.  Amazon.com has published it as an e-book.

CONGO TALES offers memoirs from a US Information Service officer’s adventures in Bukavu in 1963-1965.  His chief Congolese employee, a rascally wheeler-dealer and ladies man, takes him on film shows in outlying communes. In a jungle town he encounters a 20th century Rip Van Winkle. He meets a sophisticated American academic gone gaga over Africa; escorts a New York Times man to see an African king; and against instructions dances off on a game-viewing safari that has hazardous results. A year later, with both the Congo and he himself changed, he returns to a Bukavu still dealing with the aftermath of rebellion.  Only about a third of the contents have appeared in TRAVELS IN AFRICA.

To check it out, click this link to www.amazon.com/books.  At the top under Search enter CONGO TALES.  You may have to scroll down three or four titles to find the book.  I wanted to offer it free; $0.99 seems to be as low as the sales price can go.  Take a look.  It should be available worldwide.  Tell your friends.