In 1960 Laurel Smith was teaching school to the children of US Army personnel in Berlin.  Come Christmas vacation she went to visit the Ancient World.  She tells about going on the Nile in a felucca and, to his great surprise, taking the boatman for a ride.

Name a river.  Just say the name of a river and right away a picture comes to mind.

Say, “Mississippi.”  In my mind’s eye there is the raft with Huck and Jim floating in the quiet moonlight.  I can almost feel the moist air.

Say, “Wabash.”  I see cornfields and the sluggish brown water of the stream bordered by tangled brush and sycamore trees.

Now say, “Nile.”  No.  That doesn’t bring up pyramids and Sphinx.  The picture is a boat, a small Egyptian boat called a felucca.  The one I remember was maybe ten, maybe twelve feet long with seats like our Brown County, Indiana, rowboats and wide enough for three people to sit abreast, but in the center a tall sail that, as I remember, seemed pretty ragged. 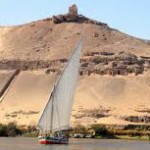 A felucca on the Nile

By the time our tour group had seen Athens, Jerusalem and Damascus, we were pretty well immersed in the ancients.  Also a bit weary of tagging along behind guides or the stretches in busses and planes.  The landing in Upper Egypt in Aswan late one afternoon promised another night with the proverbial chicken dinner for the group and then a night in a bed shrouded in mosquito netting in a hotel room that gave you the feeling of being still part of the British Empire.

The hotel did sit at the edge of a river.  Our view looked over to the other side where tomorrow we would explore the Valley of the Kings.  Beneath our window were booths and stalls of vendors wanting us to increase their earnings.  The babble of voices rose to us.

We didn’t disappoint them.  As soon as we claimed our room, my two roommates Adelaide and Betty and I went out to explore.  We looked in a cursory way at souvenirs, but what caught our interest was the boats.  Each had a young man offering rides on the Nile. 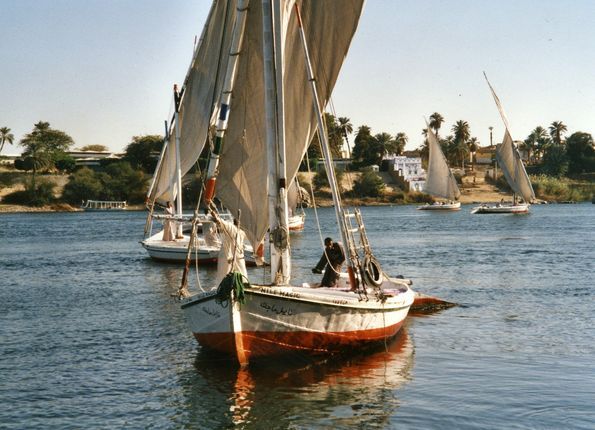 A felucca on the Nile: "Hop aboard, tourists! Wanta row this boat?"

It didn’t take any persuasion.  The fee seemed almost nothing.  We climbed in and the rower took his place, set the oars in the water and began sending us upstream.  The afternoon was warm and dry.  Steadily we pulled away from land and pushed upstream.  Our rower pulled on his oars with feet braced out in front of him until his body was a straight line from feet to head stretching his upper body muscles tautly.

Watching him I could almost feel the tautness.  And I longed for Cordry Lake in Brown County.  And Lake Tippecanoe up north; and Manitou Lake where my folks had spent their one-week vacation each July when I was small.  I loved to row the little boat that came with the rent of the cabin.  Daddy used to tie the boat to the pier with a longish rope and let me play in it.  I was so happy doing it that my happiness probably would have kept me afloat even had I fallen into the water.  And Daddy’s closeness was insurance  I never fell in, but I grew up loving to row.

Either the boatman didn’t understand me.  Or he didn’t believe what he heard.  When he realized I was serious, he tried to dissuade me.  The flow of the river was too strong.  The boat was too big.  AND I was a woman!

He moved from the center seat and let me have the oars.         How long?  I have no idea.  I pulled on the oars and stretched those tummy muscles.  Bliss! 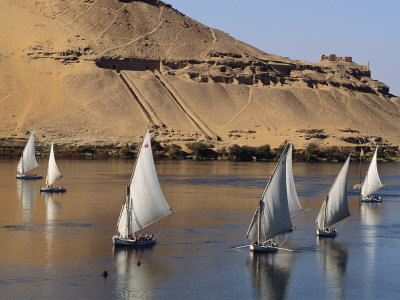 Feluccas on the Nile. All internet photos.

After a bit I gave the oars back to him.  He turned us back toward the city and went with the current.  I wonder if our guide that night told his family about the crazy American woman who took him for a boatride on the Nile.

Next post: Saying no starts an unusual friendship in Kenya.