Paul Polakoff began his overseas career at the American Embassy in Paris.  Sent to the newly independent Congo in the early ’60s, he became a USIS officer and we served together in Buakvu on the Congo’s eastern frontier.  Paul was stationed in several other African posts and worked for African-American relations even after he left USIS.  Here he writes about meeting the Gabonese who, improbably in 1968, could talk about walking a beach with the famous French explorer of Africa Savorgnan de Brazza.

“You knew the French explorer Brazza?” I asked incredulously of the Gabonese priest Abbe Raponda Walker.  It was 1968, the year I left my posting at the American Embassy in Libreville, Gabon. Brazza was last in Libreville for a couple of days in 1905, the year of his death. Otherwise his last stay there was in 1896.  Only recently did I find out that Raponda Walker was born in 1871.  He told me he didn’t really know Brazza, he just crossed Brazza’s path when he was strolling on the beach, meditating, when he was a young seminary student.  So the year was probably around 1889 or 1890. (Pietro Paulo Francesco Camillo Savorgnano di Brazza, was the son of an Italian Count whose name was Frenchified to Pierre Savorgnan de Brazza when he became a French citizen. Brazza became the first   to   explore  much of Gabon. 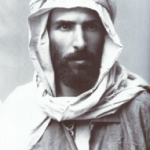 Shortly after my arrival in Libreville, a French researcher told me I really should meet Raponda Walker as he had written books and many articles about Gabon.  I went to the local bookstore, the only one in town but a beautiful one that had all the latest French books and magazines.  They had two books by Raponda Walker: one entitled Gabonese Tales, and another, co-authored by a French reseacher, entitled Rituals and Beliefs of the Gabonese People.  I purchased them and then walked over to his lodging, a little room behind a church. The doors and windows were open – anyone could walk in. Between piles of books, magazines and manuscripts were two chairs and an altar at which, I learned, he was allowed to perform mass, by Papal dispensation because he had a bad fall once and had been lame in one leg ever since.  He looked elderly, but I did not realize he was 96 and was to die a few months after I left Libreville, at the end of 1968.

During this conversation he let slip that he passed Brazza when he was strolling on the beach, quickly admitting that he did not really know him. Raponda Walker dedicated the two  books I brought to me and we chatted. He spoke many local languages, wrote dictionaries of some, and spoke Spanish (having lived in Equatorial Guinea, formerly Spanish Equatorial Guinea).  He probably spoke some English having lived in England when he was four and five.  Why did he live in England?  That is near the beginning of his fascinating life. 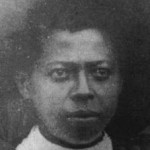 Raponda Walker as a young man

Andre Raponda Walker was born in 1871 in Libreville, the son of a niece of a local Gabonese chief, and Robert Napoleon Bruce Walker, one of the founders of the Liverpool British trading company Hatton Cookson. His father had a trading post aboard a little steamboat, which was anchored off the coast and from which he was able to prevent theft by searching workers before they left for land each day.  There he was somewhat protected against malaria rampant on the mainland. On the ship, he had a large library containing mainly books on Africa. Raponda Walker’s mother’s family was involved in slavery. As late as 1855 every one of the Gabonese tribes kept slaves.

However in 1831 and 1833 the French and British signed agreements to combat the slave trade. Along the west African coasts settlements for freed slaves were established with names like Freetown in Sierra Leone and Libreville (free town) in Gabon.

At the age of four, Raponda Walker was sent off to England to be educated. Although Andre was baptized a Catholic at his mother’s request, an English education was a Protestant one. He was enrolled in one of the strictest boarding schools in Southampton. His father brought him back to Gabon in less than two years.  By this time, however, English had become his first language and he spoke it better than his maternal M’Pongwe.  One of Raponda Walker’s works is a two volume Mpongwe dictionary, Mpongwe being the local ethnic group in the Libreville area and, as mentioned above, the language of his mother.

Though they constitute only 3% of the population of Gabon, they were in the right place at the right time, on a wide estuary opening up to the Atlantic.  They were the first people the French met when landing at Libreville; the first treaties made by the French were with them. (American protestant missionaries were installed a few miles down the coast at a place called Baraka and an old church of theirs still exists there.)  The largest ethnic group in Gabon is the Fang, who constitute over one-third of the population of Gabon and occupy the north-west part of the country as well as  neighboring Equatorial Guinea.

As the French grip on Gabon became firmer and taxes chipped away a Walker’s  profits, Bruce finally went back to England for good leaving his wife and son.  His son attended primary and secondary seminaries and in 1899 was the first Gabonese to be ordained to the priesthood. (He later became a bishop.)

He was sent all over Gabon, cut through the rugged mountainous forests and jungle and was the first to come into contact with many ethnic groups.  He came back to Libreville, was appointed to a church teaching post and worked on his notes. His was at his typewriter day and night cataloging his material with, as one writer noted, ” the zeal of a medieval monk.” 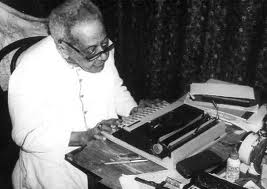 Raponda Walker at work in his study

Six years later, his work was done. The French bishop decided to send him back into the jungle to continue his linguistic and ethnographic searches.  He spent between five and eight years in six locations around the country and in a neighboring country. His first articles started appearing in journals in the 1930s. It took him until the 1960s to complete his two standard works.  Then he was so old he had to call on ethno-botanist Roger Sillans for help to complete his works. He died in 1968 at the age of 97. The beach at Libreville, Gabon.  Is this where Brazza passed Raponda?

At the time I saw him, several months before his death, he was still amazingly alert and articulate. He wrote four dictionaries, published 150 articles, a brief history of Gabon, a 600 page botanical guide, an essay on secret rituals, three anthologies of fables, sayings, proverbs, riddles, mottos, solemn  oaths, and war cries and two treatises, one dealing with native astronomy and the other dealing with tatooing and funeral rites. He went through a typewriter a year.

For me, our meeting was memorable.  He was the most interesting and remarkable Gabonese I ever met, probably who ever existed.

I must give credit to Jan Brokken for much of the background in this article, first published in 1991 in his book, The Rainbird, A Central African Journey.  He was still a teenager when Raponda Walker died.  A huge amount of research went into the section of his book on Raponda Walker.

Upcoming: Three posts in succession by a woman who motored across the Sahara, north to south, with her ex-husband.