Jinny Webber earned her doctorate in religious studies from UCSB while she was teaching English, particularly World Literature and Shakespeare, at Santa Barbara City College.  Now retired, Jinny recently wrote The Secret Player, a novel about a girl who disguises herself as a boy and becomes an actor with Shakespeare’s company.   Go to www.jinnywebber.com to read her blog, “Sex and Gender in Elizabethan England.” At www.ShakespeareanTrilogy.com The Secret Player may be ordered – and also on Amazon.

The return address on the letter by my breakfast plate that autumn morning in Oxford, England, made my heart leap. I hadn’t seen Ted since he’d helped move my kids to their father’s for the year. I left for my sabbatical in late July, 1976, and he flew to his family home, divorce in process, my idea.

I tore open his letter. “Meet me in London at New Year and we’ll cross the Sahara.”

An adventure with Ted! My idea of spending the spring term in Greece had vanished by the time I’d finished my coffee. Before we met, he’d driven across the piste, the dirt track that cuts down through the Sahara from Algeria, on an open truck called a transport with a bunch of hippies and Claudette, a slightly mad Frenchwoman. He’d always wanted to go back in his own vehicle, with me, and continue across Africa to Kenya. I hadn’t taken him seriously; less so now that our four-year marriage was over.

But no one had ever made such a tempting offer. I recalled Ted’s stories from his earlier trip and, free for the first time of the responsibilities of motherhood and job, I was ready to entrust myself to him. I don’t recall even having second thoughts!

On his previous trip Ted had taken a bus from Algiers south to meet the transport headed into the desert. Village Algerian women draped themselves in white, the opaque fabric held by their teeth so that only one eye showed. On the bus Ted sat next to one of these women. When she fell asleep, her mouth loosened from its tight grip on the cloth; she awoke with her face revealed. A pretty woman not much older than he was, she quickly rearranged herself. Because Ted was a Westerner, no sin had been committed. When he asked her, in French, why the near-total coverage, she replied that men didn’t deserve to see her face–and again clutched the cloth tightly between her jaws.. The story intrigued me in those feminist days: she felt she had the power. But how could these women speak? What power has one without a voice? I might have taken that as a cautionary tale, but I replied to Ted’s letter enthusiastically.

Our trek began a cold January day in London when we bought a rust-perforated VW Beetle in front of the Australian embassy where returning travelers used to sell their vehicles. We were weeks getting from London to Tamanrasset, Algeria, and the piste—weeks that took us across France and Spain to Morocco, where we encountered our first real setback.

Although I was entranced by the kasbah and medina (and a little frightened, staying always close to Ted), we found that the Casa Blanca American Express offices were closed. There we could have written checks on our U.S. bank accounts to fund further travel. But Morocco was cheap and alluring. In Rabat we could get visas ahead, so we kept going and I relaxed. I was here; Stevie Wonder played on the tape deck; I felt high and at peace.

Sitting on a bank beside the road south of Casa Blanca which overlooked a blooming almond orchard, I thought: I have never been so happy. Everything I have gone through up till now, on this trip and indeed in my life, has been worth it for this moment. The air was perfumed, spring-fresh under the sun, heart warming, body warming at last. All good omens. 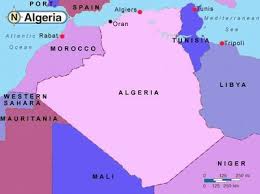 Our thoughts and the panorama passing the windows of our Beetle as we drove felt like a fabulous movie. Goats nibbled leaves from where they perched on high branches of the carob trees, shepherds stood statue-still in long brown djellabas, scruffy plants bloomed with unfamiliar desert flowers. In the tiny space of the car, my thoughts twined around Ted.  He brought me there to have the opportunity to save my life—he said as much, envisioning himself as a romantic hero.  Each night we consulted the detailed Michelin map of Africa, each water hole marked which, in relatively civilized Morocco, I paid little attention to.

No Am Ex office in Rabat, but we secured our visas as far as the Central African Republic. After our loop down the Moroccan coast and across the Atlas Mountains to Marrakesh, we intended to head north to cross into Algeria at what was said to be the only safe and open border with Morocco. In Jamaa el Fna, the broad central square of Marrakesh, a cobra rising from his basket to his charmer’s flute mesmerized me. The strange creature seemed a kind of genie as, standing beside Ted’s protective presence in that shoving crowd, I watched it undulate. What would I wish for? Just what I had: an African adventure with a daring companion. I doubt I wished for anything so prosaic as a safe return.

Beware of serpent wishes. The trip turned out to be a challenge of culture and the elements and perseverance. We peeled ourselves down and down, ended up with less than the poorest villagers who could eat that sharp chili-scented food that our stomachs had grown too delicate to tolerate, who had a place to sleep. Our expedition, modest at the outset, became more austere as we shed possessions and connections and security—and weight and the sense of perfect fulfillment felt above that almond grove. Ted left boots in one little hotel, his wallet in another—which, unlike the boots, we did recover. We gave shirts and cassette tapes to border guards, our camera was stolen. Lighter and lighter we became as the weeks wore on.

I jump ahead. Broke as we were, Marrakesh was a haven compared to what lay ahead—and that easy border crossing was not to be. A week later, having re-crossed to Spain and refilled our money belts, we landed in Oran under a rising golden moon. Sea-fronted, busy, inhospitable Oran, where Camus set his novel, The Plague. 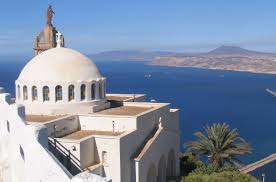 A view from Oran

Next post: Ever deeper into the Sahara with Jinny and Ted.