Jinny Webber earned her doctorate in religious studies from UCSB while she was teaching English, particularly World Literature and Shakespeare, at Santa Barbara City College.  Now retired, Jinny recently wrote The Secret Player, a novel about a girl who disguises herself as a boy and becomes an actor with Shakespeare’s company.   Go to www.jinnywebber.com to read her blog, “Sex and Gender in Elizabethan England.”  At www.ShakespeareanTrilogy.com The Secret Player may be ordered; it’s also available on Amazon.

Oran, and more so Algiers, are deceptive introductions to Algeria, as Ted, my traveling companion and ex-husband, well knew. I saw a place not so different from Morocco. In Algiers most women wore Western dress and covered their faces less than those in the cities of Morocco, who often wore a gauzy little handkerchief veil over nose and mouth. We hadn’t come for the cities, though, and we left Algiers and moved into the Sahara. Even where the road was still paved, we found ourselves in a more barren and primal landscape, unpopulated compared to Morocco where there was always at least a shepherd within sight. 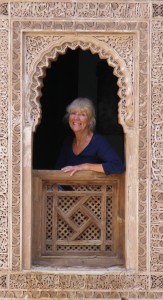 At the oasis of In Salah we left the pavement behind and the true adventure began: the piste. Sand blew across the track and we kept our eyes open for stone “ducks,” pyramids less than a foot high that marked the way. Even though it was only late February, we had left spring behind, had moved into the desert summer, hot at midday with occasional blinding swirls of sand. My first glimpse of the Tuareg tribesmen, regal on their camels, made me realize how far behind we had left the familiar—this was nothing like crossing the Arizona desert.

Here all our wits would be required. I felt exhilarated to do something so rare—and also a little angry. I now depended totally on Ted. I, who previously was more than his equal, had to go along with whatever fate he devised. He gave me a turn behind the wheel of the Beetle which I quickly relinquished: only he could navigate that track, deal with the shifting sands and sensitive gears. He spoke fluent French; he knew what sort of food was available – canned margarine, long-life milk, white bread – in the little shops, stone buildings some ten feet square with corrugated tin roofs and a single door, dark inside, often filled with a half dozen djellaba-dressed men, idlers standing there drinking coffee. In one such place he bought me tampons, me standing behind him and feeling extremely uncomfortable in this place where women were nearly invisible.

Only on the desert did we realize how rusted out that VW was! Sand blew in on us. Before we reached the piste we had purchased two 3-yard lengths of tan muslin to wrap around our heads in the local turban-style to stay cool. Now we used them to cover our mouths as well.

Usually we hid from other vehicles at night, camping behind dunes. Few travelers drove the piste, only the occasional Land Rover and the huge transports supplying the oasis villages whose drivers were likely wild men. We took no chances on them seeing us asleep and awakened to morning coffee alone on the vast pinky-gold desert, so very small and yet so large, the only humans as far as the eye could see. 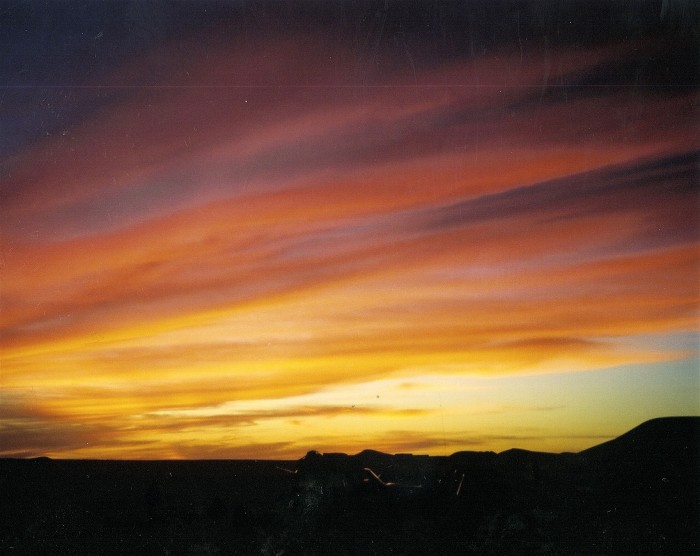 "at last alone on the pinky-gold desert, so very small and yet so large"

Even Land-Rovers got bogged down on the piste, scarcely a track across the Sahara, but we got stuck just once, in a sandy river-crossing in Niger. As Ted struggled to put branches under the tires, he whispered for me to keep an eye on the camel rider who patiently watched him without offering assistance: “He wants you and the tape deck.” He got neither, but this was not our only contact with a desert man.

In one oasis there was a sort of campground of Europeans, surrounded by a low wall – with a large washtub fed by a well pump. I had been wearing a cotton skirt a few inches above my ankles made of a flowered black print and a black tank top. When outside the vehicle I would be sure the tails of my muslin turban covered my shoulders. These clothes, and Ted’s loose shirt and trousers, were loaded with dust, so I put on my bikini and took them to the campground washtub. I felt free and fresh, letting the water splash and looking forward to a good shampoo after I’d laid it all out to dry.

Glancing over the wall, I saw a robed man watching. From where Ted was checking out the car, he saw him too and strolled over to chat. I suddenly felt exposed, shameful – I wasn’t in Germany or Sweden, despite the languages that surrounded me. But my clothes were wringing wet, even our single towel.  I turned away and continued scrubbing with as modest movements as I could manage.

Ted came to tell me the observer had invited us to dinner. An Algerian desert household—a desert meal—it sounded fascinating! For all my embarrassment at being seen so bare, I was not the one who hesitated. After all, my clothes would dry quickly.

But Ted had only made a show of discussing it with me. “We don’t know the situation. It wouldn’t be safe.” And he declined in gracious French. I was disappointed and thought, here he goes being macho yet again. Only afterwards did I realize the risk that invitation might offer a woman so revealed in the man’s eyes. 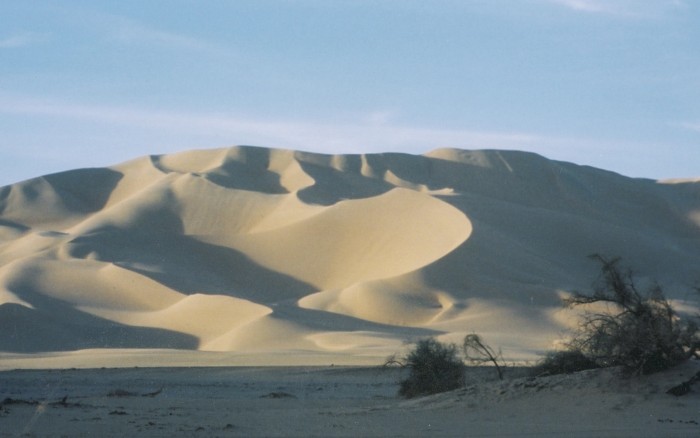