Bob Baker, who had an extensive, world-girdling career with USIS, recently told us about hobnobbing with Ugandan tribal royalty in his first overseas post.  After Uganda, Bob went to Mali where he undertook a variety of projects.  He tells about two of them here: taking an American basketball coach to Timbuktu and getting a photo for an anti-smallpox campaign.

The U.S. Information Agency offered the teaching services of Salvatore “Red” Verderame, an outstanding basketball coach, to help African teams. It was a popular sport in Mali, so the Ministry of Sport and the Foreign Ministry approved his visit and tour, giving us a rare opportunity to visit towns and even Army camps around the country. U.S. diplomats rarely got permission to leave the capital, Bamako, under the then Marxist regime in 1969.

Red and I went on tour to a dozen towns and cities in the post’s ancient green Chevy station wagon. Red spoke no French so I was his interpreter. He was a middle aged, very warm, 6′ 5″, pear shaped Pan with red hair and blue eyes, but still very nimble on the court.  We arrived at supper time at the Chinese Communist-built motel in Mopti, the Venice of Africa  (called that locally because the streets flooded in the annual rains).

It’s about 285 miles to Mopti from Bamako on the washboard, dusty, red clay roads. I had been in Africa a couple years and knew the local ropes somewhat. After I washed up in the thin trickle of warmish water from the shower, I called Red for supper. We hopped over the thin line of sewage that trickled out of one of the rooms next to ours. The line ran near, but not into, the dining room.

We sat to order supper. I suggested we get the chicken stew, as it was boiled and safe to eat. The stew was good. Red enjoyed it with excellent French bread, a fresh baguette, amazingly still baked in Marxist Mali, and coffee.

The stew came in large, broad rimmed bowls, a substantial meal. It also had some very tiny roaches in it, about half the size of rice grains. When I saw them floating on my soup, I automatically used my spoon to scoop them, then tapped them out onto the edge of my soup plate and kept eating. I was used to them and knew they were harmless. 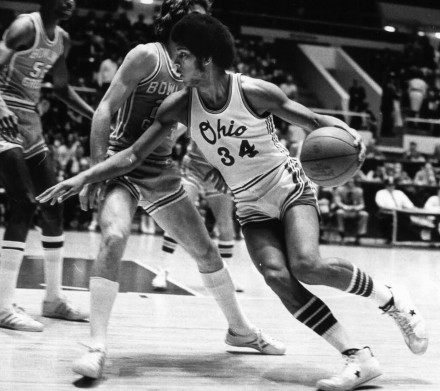 This photo appears in Google images under Red Verderame although it is almost certainly not hm. Nice photo, though.

Halfway through the meal Red asked me what I was doing putting stuff onto the edge of my plate. Then he leaned over close for a good look and said, “Jesus, they got legs!” He looked at me as if I were crazy and stopped eating his stew. He ate only canned beans right out of the can after that, opened them himself, and always gave me a funny look when I ate local food.

Red was a great favorite with the Malians on and off the court. He was an excellent coach in dumb show and joined in the games sometimes to demonstrate points about the game. Obviously expert, friendly and outgoing, he made an excellent impression with enlisted men and officers at Army camps and with students and the staff at high schools.

Way upcountry, in Timbuktu, Red made a big hit at a crowded local market which sold  everything from baskets and gourds to fine gold work and old coins. Spread out on a scrap of cloth on the ground were Austrian thalers, English guineas, Spanish doubloons, coins no longer used in Europe. At one corner of the market a young musician was playing a local flute for change tossed by passersby. Red loved music and began to do a jig in front of the little street musician. A crowd of market women instantly formed around the giant red head doing his dance. Red took one by the hand and began to dance with her. A couple other women joined in a circling dance around the dusty street. Another kid began to play a little drum as the crowd swelled. Red raised his arms and held up his big index fingers, grinned broadly and danced very gracefully for a couple minutes. The African crowd loved the giant Pan figure dancing. A German tourist in full khaki regalia: shorts, hunting weskit, shirt and pith helmet, struggled furiously to assemble his complex camera on the edge of the crowd, but Red stopped dancing to a round of applause before he could get his picture. I still have mine in memory.

After Red finished his tour teaching around Africa, he sent out from his hometown in Connecticut, a dozen basketballs. We mailed them to schools and Army camps. He was a great guy, baked beans and all. 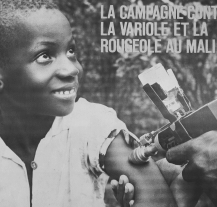 The boy on the poster

This super cute kid was standing in line with his Mom to be vaccinated against smallpox and measles (in the same shot) in Bamako 1969. I cut out the rest of the shot in my tiny dark room, reversed the photo, shadowed it.  I sent it to USIA’s excellent printing shop in Beirut to be made into a poster (white on Prussian blue, a favorite Malian color) and on the cover of a pamphlet explaining why you should be vaccinated.

The poster was used throughout West Africa. Mali made a postage stamp of the boy getting his shot. It worked, the campaign. Smallpox was wiped out in Africa as part of a U.N. World Health Organization  Campaign operated in Africa through the Center for Disease Control in Atlanta under an AID contract.

PS: When he actually got the shot, it stung and he cried a bit, but he never got smallpox.

Next post: Spend a night in a South African jail!