Terry Honikman grew up in South Africa, the son of a mayor of Cape Town.  After finishing his undergraduate work at University of Cape Town, he went to Stanford.  There he got both a PhD and a green card.  When he applied for a secret clearance, to do defense work in America, he foresaw a possible rough spot when investigators learned he had spent a night in jail.

After leaving Stanford University with a newly minted PhD in 1970, my employment with General Research Corporation in Santa Barbara required that I  obtain a secret clearance. Although not yet a US citizen, I was eligible for that lowest level of clearance because I was a green card holder. Among the many questions that had to be answered, was the need to account for my whereabouts on a daily basis for the preceding decade. While that appeared to be a significant challenge, it was resolved fairly easily, except for one night. That was the night that I had spent in a South African police station.

Growing up in the 1940s and 1950s as a white boy in the Union of South Africa, was an experience of privilege and plenty. The economic fabric of racially segregated South Africa was so stretched that even the least wealthy white families routinely employed black and or colored servants. I grew up in a middle-class home in which two small rooms and a shared bathroom comprised the servants quarters. Despite our relative wealth compared to the people who worked for us, when I reached the drivers license age of 18, a new car was not an expectation of mine. Fortunately, I was both interested in automobiles and mechanically capable and was thus able to find a fixer-upper and then turn it into a good first car. It was a 1956 Morris Minor whose engine had been destroyed by its first owner.

At the end of my first year of Mechanical Engineering at the University of Cape Town, I found a summer job at the British Motor Corporation (BMC) assembly plant at Blackheath, about 15 miles east of Rondebosch, the suburb of Cape Town where we lived. The national government was intent on growing domestic industry, and encouraged foreign manufacturers to share their technology, know-how and jobs. As a result, BMC had established its assembly plant close to Cape Town’s enormous harbor as well as an endless supply of semi-skilled labor. One of the advantages granted by the government was that as long as parts were imported for use in newly manufactured automobiles, they would be free from import duty. When an imported part was damaged, even if only cosmetically, the result was that it could neither be used in a new car, nor sold as a spare part. Instead, these parts were placed in a dump because the idea of recycling materials had not yet been invented. 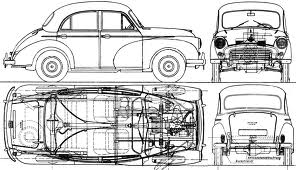 Morris Minor 1956 as seen by an engineer

That dump had an incredible attraction for me, and one day I discovered a brand-new MGA engine, discarded because the rocker box cover had been dented. It did not take long for that engine to find its way into my Morris Minor. I was thrilled, not only because the destroyed engine had been replaced, but also because I now had a very special Morris Minor.

Some of my friends had sports cars and other more expensive cars that were well beyond my dreams. My cousin also had a Morris Minor, but he had installed a supercharger on his engine. Now, with the more powerful MGA engine in my car, I felt that I could at least associate with my friends when we discussed or worked on our cars. It was during one of those teenage discussions that I first heard the word ton applied to automobile speed. When somebody “did a ton”, it was the cool way of saying he had reached 100 mph. Some of us, I am sure, did achieve the ton, but for most of us it was the equivalent of a grand fishing story. Although the roads outside the urban areas of South Africa were not restricted by speed limits, many of our cars were simply not capable of reaching the ton. Nevertheless, bravado ruled the day, and we all talked about doing a ton, as if it was routine. 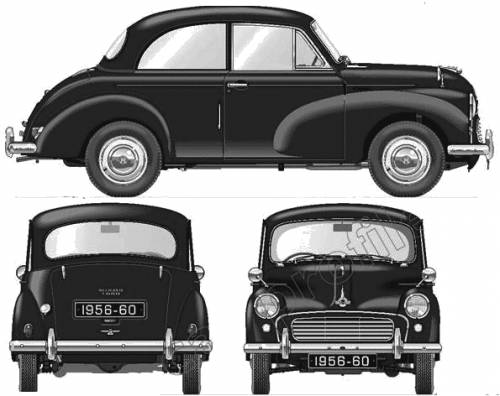 Morris Minor 1956 as seen by a non-engineer

The distance from Cape Town to Johannesburg was actually about 830 miles, most of which was on excellent national roads. The Holy Grail of our little group of car enthusiasts was to drive to Johannesburg in 10 hours. If we allowed for a few short breaks on the trip, then the 10 hour time would allow us to claim having driven a ton to Johannesburg. I am not sure if I was actually foolish enough to have planned such a trip or whether I just remember a friend telling me that that is what he had planned, but I do recall discussing a ton to Johannesburg on at least one occasion.

Well I did drive my special Morris Minor from Cape Town to Johannesburg, and if I recall correctly, I did complete the trip in one day. I remember the satisfaction of arriving at my destination without having stopped for any mechanical breakdowns. The trip back to Cape Town was not quite so smooth. I left Johannesburg around the middle of the day, but was not concerned about having to drive the last of the trip after dark.

Driving after dark, however, is what led to my little adventure. Somewhere in the Western Cape, I decided to leave the National Road and either look for something to eat or perhaps buy some petrol. I no longer recall where I left the National Road, but I do recall finding myself on a small road leading to a little town. Fortunately I had reduced my speed, so when the impact occurred, it was not as serious as it would have been at freeway speeds. I hit a wild pig. 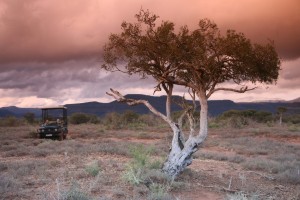 The pig was killed instantly, and the right front bumper and fender of my special Morris Minor were badly dented. The damage was severe enough so that the right front wheel could not rotate. I started walking toward the town, and was soon picked up by a passing motorist. In those days, it was relatively safe to hitchhike. On the ride into town, I learned that there were no mechanics, no restaurants, and more significantly, no hotels. I was dropped off at the police station where I explained my predicament. The policeman was quite excited and offered to drive me back to my car. Naïvely, I thought he was offering to help me make the car drivable again. When we arrived at the car, however, I learned the reason for his interest. He scooped up the dead pig, dropped it in his boot – that is what a trunk is called in colonial language – and jumped back into his driver’s seat. Then he explained that he would organize help the next day and that since I had “contributed” the pig, he would see to it that I was fed and housed that night. I ended up spending the night in the only cell in the police station.

As a historical note, it was not uncommon for policeman to provide hospitality like that to itinerant white students. I am confident that had I been of a different race, that my little adventure would have turned out very differently.

Next post: A visit to Rwanda leads to Goats for Life.