Bob Baker, who had an exceptional career serving in USIS posts throughout the world, adds another chapter to his adventures as a US cultural officer in Mali.

The dictatorial, Marxist Malian government ran Radio Mali with European communist material and editorial assistance. They denounced the U.S. every day as a racist, imperialist, blood-sucking capitalist country.  My job at our Embassy in Bamako was to get pro-American stories into Malian mass media. I failed at that, but I ordered audio tapes from the Voice of America radio. They included a French language weekly “top of the pops” music show. The Malian government forbade me to enter the radio broadcasting building, but my African assistant, Sidiki, carried the tapes over. He was a charmer and persuaded them to use the music tapes. The Voice got a brief credit at the end of each show, the only pro-American moment on Radio Mali all week.

That music tapes idea led me to ask Washington to send to Bamako the Junior Wells Chicago Blues Band. It was due to tour Africa under U.S. Information Agency auspices. He was one of the best musicians I have ever met or heard.

I cabled Junior asking him to do five shows in Bamako’s stadium and if he had special needs. When I picked him up at the dusty Bamako airport with his band and their gear, he told me he had one special requirement; five quarts of Johnny Walker Black Label, one before each show, delivered to his hand.  Had to be quarts. After I got him settled into his hotel, I went to see our Ambassador and asked his help. He supplied the five quart bottles of Johnny Walker Black Label. Because we bought liquor duty free, it cost just about five dollars a bottle.

Bamako’s only stadium was packed for the performances. The Voice of America radio had broadcast publicity about Junior’s shows in Mali and had played lots of his music in its West African short wave service. We gave his albums to Radio Mali; it broadcast them. I had big speakers hung outside the stadium so the huge throng that could not get inside could hear his performances.

Backstage, as the band warmed up the packed, standing room only audience, Junior asked me for the quart bottle of scotch. I delivered it.  He twisted off the cap and literally chug-a-lugged the whole bottle. I had never seen anything like it. He handed me the empty and burst onto the stage. 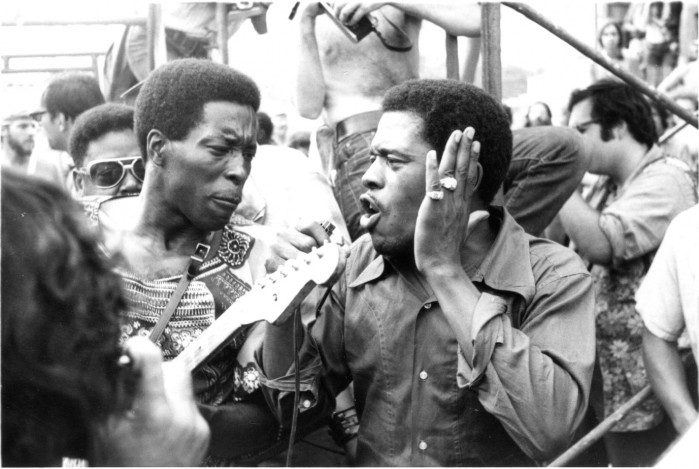 He was astonishing. He started in high gear and built up his rhythms to a pulsating stream until the whole place rocked with excitement and sexual power. What a guy! With huge energy he danced and sang all over the stage. For his final number, an hour and a half later, he jumped off the end of the stage onto (not into, onto) the audience, grasping a hand-held mike with a 300-foot lead. He did not hit the floor. The packed, hugely excited audience caught him as he jumped and literally passed him overhead from hand to hand. He kept singing into his mike as they passed him around the crowd until they circled him back to the stage and tossed him onto it.

They loved him. So did I. It was one of the greatest musical experiences of my life. Back on stage, still singing and dancing, he was wringing wet with sweat. The audience roared its pleasure. Bright blue, scarlet, gold, silver, white robes and little caps swirled around the audience in their tumult of dancing and shouting. What a performance!

He did the same thing four more times over the next four days. After each performance, he came home with me and the band for supper. He was stone sober. He had one beer with supper. That was all. He was not drunk. He was not a drunk. Maybe he had some Scots blood in him and this was a way to summon up wild ancestral spirits.

President Modibo Keita’s Marxism did some good for ordinary Malians, providing free basic education, medical care and peace.  But they came at a very high cost in political control. At least Junior Wells left Malians with a couple very happy hours of music.  He showed America was not entirely a racist country no matter what Radio Mali said every day.

Next post: Being a US Embassy dependent in Leopoldville at 18, part one.