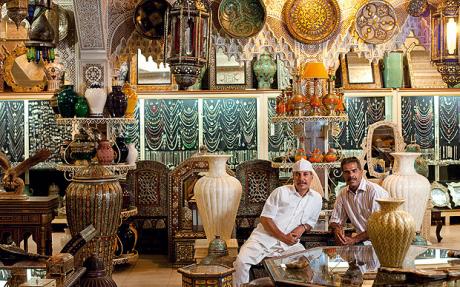 Laurel Smith tells us about a looking-only souk tour, probably in Melilla.

All morning long we had looked into shop after dark little shop.  Merchandise spilled out onto the narrow North African streets.  Brass tables, copper pots, inlaid trays and camel saddles tumbled together fighting for space with fruit stands and native breads.  The charm had lessened as fatigue increased.

Here, though, at this one shop, I idly fingered a camel hair blanket hanging by the doorway.

“It’s a beautiful blanket, Lady.  And it’s cheap.  I sell it to you for only twenty five dollars.”

The man came silently from the back of the room.  Dark Arab eyes.  Brown, leathery face.  Grey caftan hanging on his gaunt frame.

I was not interested.  I didn’t want a blanket.  I was tired.  I just wanted to get back to the hotel where our tour group would have lunch.

“It’s made good, Lady.  Feel how heavy and waterproof.”

“But look how beautiful.  It will make a wonderful souvenir of North Africa.”

He was right about that, too.  The tightly woven beige blanket with dark brown designs would make a great wall hanging.  I didn’t want to insult the man, but I wasn’t into wall hangings, much less heavy, scratchy blankets.

“Make me an offer,” he begged.  “No good offer will I refuse from a nice American lady.”

I should have walked away right then and there.

“Five dollars,” I said casually.  There.  That should prove to him I really didn’t want it.

“Five dollars!  No!  No!  It is worth much more.  But you are a lovely lady.  Fifteen American dollars.”

I shook my head.

My Arab friend stuck to me like a band aid.  Smiling broadly, he put the blanket over my arm and held out his hand.

He grinned, took my money and disappeared into the dark depths of the shop.

I owned a camel hair blanket.  Did I win or lose the game? 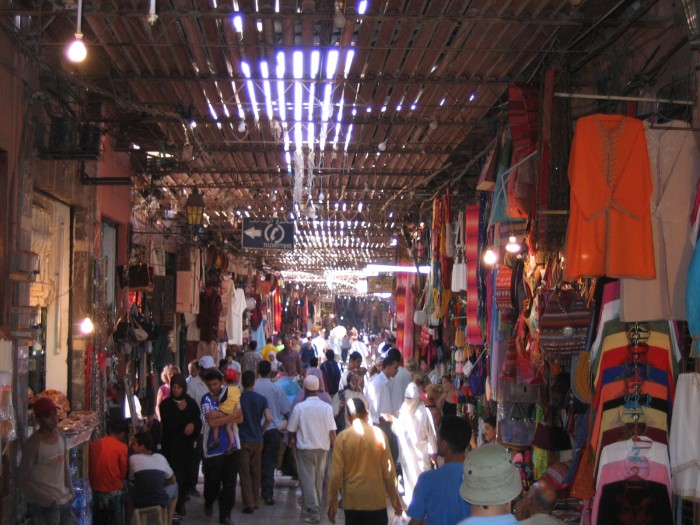 A souk in Morocco

Now Cyndi Martin tells another story of souking, this time in Tangiers.

In 1978, my husband Ted and I had been touring Spain and Portugal for three weeks.  Our side trip to Morocco would become memorable for its wonderful experiences, but at the same time for its terrifying moments.

As the ferry docked in Tangiers, my stomach slowly began to level out.  I got up from my fetal position on the couch in the bar, where I had taken refuge from the fierce rocking motion of the Straits of Gibraltar, and I had my first view of the continent of Africa.

Second class passengers were not allowed access to the inside rooms of the ferry, so those people had to brave the strong winds and the sea spray on deck.  I had watched through the window as a heavily-scarved woman and two children found a small table under the eve of the cabin.  The children put their left hands behind them as their mother emptied a burlap bag of what looked like rice onto the bare surface.  The three had proceeded to eat the food with their right hands.

The Moorish buildings of Tangiers sparkled in the clear air.  We had reservations at a new high-rise hotel on the outskirts of the city.  When the bus left us at the lobby, we could look through to the clear water of the swimming pool as it created its own mini waves, reminding me again of the ferry ride.

From our eleventh story room, I opened the balcony doors on an unfamiliar and exotic world.  The tall towers were minarets, and I could now hear the strange sound of the call to prayer.

Later that night, at a Moroccan restaurant, we sat on pillows with other customers and shared a huge common pan of couscous with lamb.  The waiter brought large chunks of watermelon for dessert, and he asked us in English about our lives in America. It turned out to be one of the most delicious meals we had ever had, and we told the chef as much when he appeared.  He seemed pleased.

The next day, the wind had calmed, and we went on a tour of the Kasbah, an ancient marketplace in the center of the city.  Before we got off the bus, our guide warned that we should stay together tightly as a group and to beware of pickpockets and thieves.  Then he said something I didn’t hear, producing wide-eyed expressions on some of the men.  I asked Ted what the guide had said; he just told me to hang on to him no matter what.

As we meandered through the maze of whitewashed walls, we stopped to watch a snake charmer coax a huge swaying cobra out of its basket.  Walking further we saw food stalls selling meats, vegetables, fruit, and spices from all over Africa and Spain.  Others boasted rugs, clothing, and leather goods.  The riot of colors was a feast for our cameras.  The local women were almost completely covered, smiling at us with their eyes.  Some wore silky pastels, a few were dressed in black.  I felt self-conscious in my Western jeans and blond hair — I think I would honor their culture with a headscarf if I went there now, a bit older and wiser.

All at once, I heard a woman scream.  “He took my purse,” she cried in English. She was down on the ground, her walker overturned.

The men in our group rushed to the rescue.  As I watched them help her up, I felt a firm grip on my neck, another on my arm.  Ted finally saw what was happening.  He called “Hey!” and, along with another man, ran back to me.

I felt the grip on my arm loosen, and my arm jerked up as Ted grabbed the intruder, who now fled, the tour guide not even close behind.  The theft of the purse had been a clever ploy, a distraction, someone said. It was me they were really after!

That night the wind came up again.  We heard it assaulting the windows and hurling the pool furniture around down below.  I dreaded the return trip on the ferry the next day.

Weeks later, safely back in Santa Barbara, we were telling someone about our recent trip to Morocco.  He said he had a friend who was a pilot for a major airline.  This guy had told him about two fellow pilots who were on layover in Tangiers several years before.  They had visited the Kasbah with two female flight attendants—then called “stewardesses.”   Somehow they got separated, and after a frantic search the pilots called the police.

The women were never seen again.  The story still causes me to shudder.

Next post: Another story from Morocco.   A Canadian backpacker loses her pack, but meets a dark and handsome stranger with a little black book.  He helps her retrieve her gear.