Jan Rudestam adds another account of travelers dipping their toes into Africa.

When people ask if I’ve ever been to Africa, my first impulse is to say, “No. Never.” The northern strip of the continent, between the Mediterranean and the Sahara, fails to carry the same associations as the Africa of wildebeests and lions. But that is the part of Africa I visited in 1972, a long time ago. The western world was chafing against restrictions of all kinds, demonstrating against war and the military-industrial complex.  Demonstrating for civil liberties, women’s rights, and sexual equality. That was the year I took the ferry from Malaga, Spain, past the rock of Gibraltar on the way to the Moroccan port of Ceuta. Ken, my friend and traveling partner, watched the ferry pass the great rock, leaving behind the tourist beaches of southern Spain, and approach the African continent.

The dock at Ceuta was a chaos of people and animals. The border guard opened my passport, and stared at me with hard eyes. He had seen too many women like me in the last few years, unmarried women in blue jeans, with backpacks over our shoulders, from Sweden and Norway, the U.S. and Canada. I chewed on my braid while I waited for him to stamp my travel documents.

Ken was sitting under the shade of a palm tree having already passed through immigration. “What took you so long?” he asked in a sleepy voice.

I dropped my backpack on the ground next to him. “When does the bus leave for Tetouan?”

“It should be here in a few minutes,” he said. “More or less.” He rested his head on his pack and stretched out, boots splayed, his leather hat over his eyes.

I watched the people coming and going around me. It seemed there were only men at the docks. Men wearing djellabas, white cotton gowns with hoods, some with faded blue stripes, others with pale orange stripes. Men wearing uniforms, police or soldiers, carried rifles over their shoulders.  Shepherds in dusty sandals herding their sheep and goats. Men arguing and selling mint tea. 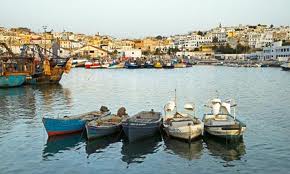 There was no room for our backpacks on the bus, so our packs were sent to the roof. We found a bench inside and while Ken resumed his nap, I stared at the world outside my window. The green hills were specked with small villages of no more than five or six mud walled buildings. Children ran laughing through dirt streets. And women, the first I’d seen, walked the hills, huge sacks stuffed with mint loaded on their backs, bent under the weight. They must have been sweating under their headscarves and long skirts, I thought, as a woman rested briefly on her walking stick before beginning to labor up the next hill.

We poured out of the bus at the terminal in the city of Tetouan.

Most tourists took the ferry directly to Tangiers, but we had decided to stay away from the big city. Tetouan promised to be a more authentic version of Morocco, with an old medina and orchards of pomegranates, almonds and oranges. We had planned to spend the day in Tetouan, then take the evening bus to Fez.

Luggage was being thrown from the top of the bus, sometimes caught by the owner, sometimes landing in a cloud of sand. Bales of cloth, boxes taped with duct tape, plastic suitcases secured with rope. Ken’s backpack tumbled into his arms. I waited until the roof was empty but my pack didn’t appear. Anxious, I ran to the driver and asked where my pack was. He shrugged and walked away with indifference, having already done his job.

Others took up the search, men came closer, wanting to hear the whole story, what my pack was like, who I was with, was I married, why had I come to Morocco. Their curiosity made me both anxious and frustrated. I wasn’t getting any closer to finding my pack by answering their questions.

“Let’s go to the police station.”  Ken reached into the press of questions and pulled. I walked beside him, shocked that there was enough gravity to hold me to the earth without the weight of my backpack. It contained everything I needed for three months of travel: toothbrush and toothpaste, birth control pills and tampons, boots, sweaters, jackets, jeans, shirts. Fortunately I carried my passport and travelers checks in a leather pouch around my neck. My identity was intact and with enough time I would be able to figure out how to reconstitute what I needed. But at that moment, I just wanted my stuff back.

The police were no help. A bored sergeant shrugged his shoulders, much the way the driver had, as if to say: what do you expect? He looked at my hands, the lack of a ring, and glared in stony hostility. An unmarried white woman, traveling unchaperoned, traveling with a man, was beneath contempt. I left the police station in a state of irritation and frustration. Ken was ready to forget about it, move on, figure it out later.  “Let’s just get out of here. We can take the next bus to Fez. It leaves in a couple of hours. We can get something to eat, and get the hell out of Tetouan.”

“But what about my pack?” I argued, angry that nobody would help me. My anger turned to tears of helplessness. There was nothing more I could do.

We walked back to the bus station, tears staining my cheeks, and a young man approached me cautiously. He was different from the dusty djellaba-gowned and sandaled or barefoot men I’d seen so far. He wore a sports jacket and trousers, shiny black shoes and a button-down dress shirt. “Everything OK?” he asked.

“No,” I choked back my anger and explained.

“It may be that your luggage didn’t get on the bus. Perhaps it is still in Ceuta?”  That hadn’t occurred to me. I started thinking about how to take the bus back to the docks and return before the bus to Fez but it all seemed overwhelming.

“I can take you,” he said, gesturing at a black convertible parked on the square. It didn’t take long for me to agree. Ken stayed with his pack and promised to find us some lunch.  I got into the black convertible.

The young man, Mohammed, drove fast. “Don’t worry. We will look for your backpack and maybe find it.  And then you’ll be happy.”

I stared grimly ahead, my attention on the moment ahead when my pack would exist or would not exist. In my mind, it existed. I forced it to. I created an outcome with my pack in it.

We pulled into the ferry yards in no time. Where the bus had taken an hour, we had covered the distance in twenty minutes. Mohammed spoke rapidly to the men loitering around the docks.  I watched the infuriating repetition of shrugged shoulders and searched for myself, first close to the bus stop, then in the bushes and behind trees.

And there it was. The straps had been opened. Clothing spilled out onto the dust. I got down on my knees and shoved my boots, jacket, and jeans back inside. My sleeping bag was unrolled and dirty but still usable. Something could be missing, but right then I had my confidence back and enough of my stuff to continue the voyage.

I called to Mohammed as I shoved my things into the pack and secured the straps again. I lay the pack in the back seat and we started the drive back to town. I was relieved and happy. I felt myself unwind, my body relaxing, as the green hills rushed by.

“Where are you from?” Mohammed asked. He hadn’t spoken much on the drive to the ferry, or if he had, my answers were likely testy and terse.

“I’m from Canada,” I told him, smiling now. This man had been kindness beyond expectation. I felt flooded with gratitude.

“Very cold in Canada,” he said.  I didn’t argue the point.  “Cold” was the association most people had to “Canada”. “I have many friends from Canada,” he continued. “From Montreal and from Ottawa.  Many girlfriends.  From Europe too.  I have girlfriends from Denmark and Sweden.  Beautiful, tall and blonde.  Here, I will show you.”  He took out a little black book – yes, the iconic type – and told me to open it.  “See there,” he pointed at a name at the top of the page.  “She is Swedish.  Very beautiful.”  There was a Scandinavian name, an address in Stockholm, and three numbers.

“Are those her measurements?” I asked.

“Oh, yes. She is very beautiful.  She is a very good girlfriend.  I go visit her.”

“When do you visit?”

He took the book from me and turned to another page. “There is Yvette, from Paris. We speak in French. Much better than English.” He laughed while I read Yvette’s measurements. There were two Xs next to her name. I didn’t need to ask what they meant. I flipped the pages. There were names of women from Germany, Spain, Belgium, Hungary, Italy, Switzerland, and the British Isles. There were names of women from Canada, the U.S., Argentina and Brazil.  And next to each, a set of three numbers, and frequently a series of Xs. I looked at Mohammed’s deeply tanned square face, his chin lifted above the open collar of his white shirt.

“Do you meet your girlfriends here? In Tetouan?’

“Some here, some in Marrakesh. Sometimes I go to Europe for work.  I meet many women.  Have many girlfriends.”

“Girlfriends”, I realized, was a euphemism for sex.  He was young, intelligent and westernized.  He was bragging about his conquests.  And since Western women were liberating themselves, it was likely that the women were bragging too, about the handsome Arab they met on the Tube or the Metro.

Ken waved from his shady spot under a palm when we arrived back in Tetouan. He came over to help with the pack. “Thanks, Man,” he said and shook Mohammed’s hand.

I wanted to thank him too, but I wasn’t sure how.  He had done so much for me.

“Please,” Mohammed said.  “You write your name and address in my book?”

“Of course,” I said.  It was the least I could do.  I had no idea what measurements he would assign to me or how many Xs.  That was not my business.   I shook his hand, thanked him again and he drove away.

Later in Fez, I discovered that two things were missing from my backpack: my flute and my birth control pills.

Next post: How to make music in Bamako, Mali.