As Krys related in the first part of her piece about Leopoldville, she, as a teenaged US Embassy dependent, met Marine guard Bob Crawford and a friendship blossomed.  She continues the story:

Even though the Congo was really quite unstable after independence, we were young and generally unafraid.  Everything we did or everywhere we went was a new and exciting adventure.  Roadblocks were fairly common, so we were pretty used to them and generally knew how to avoid them.  Once we took a road to the Stanley Monument.  Apparently we were going the wrong way and the Congolese military police detained us, intending to take us to jail.  It was terrifying, trying to convince them that we were ‘corps diplomatique‘.  After several attempts at calls to the Embassy, we were eventually freed.

My father met another Polish man living there, who was known as a crocodile hunter.  He took us – my father and brothers, Bob and me and a few others – on his boat for a trip up the Congo River.  The water was rough.  There were some scary militia types along the riverbanks in places, but it was an adventure that we survived.  When we got back near Leo, he stopped on a sandbar in the middle of the river, and we all helped him paint the boat.  My brothers grabbed onto some of the vegetation in the water and floated around for fun.  In retrospect, the whole thing was pretty reckless! 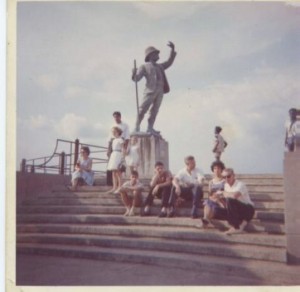 I got my first job working in military personnel for the UN peacekeeping forces in early September.  Not bad for a still-seventeen year old!  A very interesting job with so many diverse nationalities.  Everyone in my office was from a different country.  I was there for just a couple of months before I landed a job with the education director at USAID.

I worked until our family R&R the following summer.  Bob was being reassigned to Tehran, Iran, and my family was headed for a summer in Rome and Malta.  On his way to Iran, after a side trip to Beirut, Bob was able to take some leave and visit us in Malta.  We attended the President’s Ball at  Verdala Palace.  Very formal and right out of a fantasy!   Our little vacation was filled with walks, gorgeous sun filled days (and sunburns) and lovely evenings on the rocky beaches listening to the band music under the starry skies.  It was magical, and it was on the beach that we became engaged. 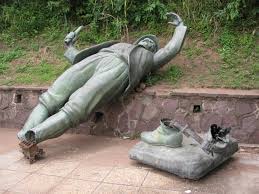 Stanlet Monument as laid to rest by Congolese

So, Bob went to Iran.  I went to England for a semester of college, then returned to Leopoldville.  Our only form of communication for the entire following year was through letters.  I went back to work at USAID, this time in the controller’s office.  I spent time with the few friends close in age and continued to explore the lovely country.

I took a mini ‘safari’ to Zonga Falls with friends from the UN.  The countryside and our drive were so beautiful.  It was exciting to be out where could see wild animals and where we needed Congolese guides and porters to get us to our destination.  After some time digging our vehicles out of mud rutted roads, we hiked into the back country to get to the magnificent waterfalls, then picnicked along the riverbank near the falls.

After another R&R to Rome, Malta and England in 1964, I returned to the States alone.  Being almost 20 years old, I had exhausted the government paying for me to travel from post to post with my family.  I had one free ticket left, and that was to return to the U.S.  So I took advantage and spent a few days in Rome, Geneva, Paris and London on my return trip.  My parents were being transferred to Liberia and I was going to attend George Washington University. 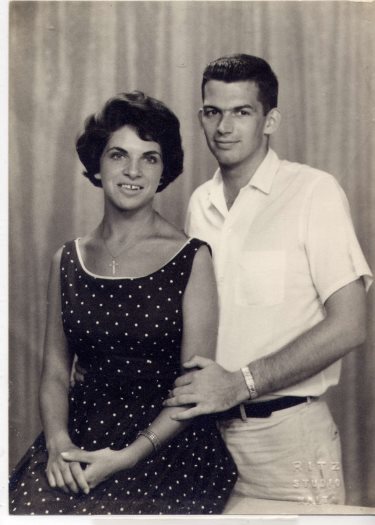 Bob returned to the States about the same time and was discharged from the USMC after five years of service.  He was in northwest Pennsylvania and I was in Washington.  After a semester at school and dealing with a long distance relationship, we married in March of 1965.  So this year, we will be celebrating 49 years of marriage.  We have been blessed with four incredibly accomplished daughters and three precious grandchildren.  We have since travelled to England and Malta, as well as crossed the U.S., with our children, but the Congo has been too unstable and out of reach, something that has always made us sad.

Beyond the simplistic telling of experiences, something about Africa profoundly changed us.  There is an understanding deep within us about peoples and cultures vastly different from our own, yet in the core so basically the same.  I came to understand that sometimes WE are the ones to be pitied because there is so much superficiality in our world and distractions that fail to see another’s soul.  Without television, technology or any true connection to the outside world, we were able to truly connect on a human level and appreciate the natural world and its people, their joys and their struggles.  The Congo and her people reach into my thoughts and my heart daily.

When we left for the last time, I remember crying on the plane.  As excited as I was to be coming home, to Bob and the rest of my life, I was also heartbroken.   The Congo would be an integral part of me forever.  My brothers laughed at me.  I guess not everyone experiences it in the same way!  Those two years defined me and much of my thinking at a very impressionable time and have had a profound effect on our relationship.  I cannot imagine not being able to share those experiences and feelings with the person you love.  And I imagine it would be hard for someone who wasn’t there to understand.

We both left the States in 1962.  Kennedy’s assassination happened while we were away, the March on Washington, Cuban missile crisis, civil rights, the Beatles, everything had changed.  Because we had been gone and quite out of touch, returning in the fall of 1964 after two years’ absence, the change was strikingly obvious.  Our country had changed, we had changed, our perspective was vastly different.  Nothing would ever be the same.

I met a Nigerian woman once and told her that I truly believed that I had left a part of my soul in Africa.  She smiled and said, “You did!  Humanity sprung from Africa.  She is ‘Mother Earth’….our souls are drawn to our earthly mother just as much as to our Heavenly Father.  We are all the same.”  I will never forget that!

Next post: A report from a Peace Corps doctor presently serving in Uganda.