Last week biologist Richard Poole told about a working EarthWatch visit he and his wife Christine made to a hippo sanctuary in northwest Ghana.  This week he and Christine have adventures trying to leave the country.

Leaving the hippo sanctuary at Wechiau in northern Ghana early in the morning, we arrived at Accra late afternoon.  The next morning – Tuesday – we headed for the ticket office to confirm our flight home the next day, Wednesday.  “I’m sorry,” we were told, “but that flight will not leave until Friday.”  (Later we learned the flight was cancelled because there were too few passengers.)

What were our options?  Get mad?  That wouldn’t do any good.  Book a flight on another airline?  Too expensive.  Hang around Accra?  No way.  Take a trip?  The latter was selected.

We decided to visit Cape Coast Castle, about a half day’s drive along the coast west of Accra.  It is one of the large commercial Gold Coast forts built by European traders, originally for trade in timber and gold, but later used in the slave trade.

Since the taxi fare was cheap, we hired the driver who had driven us around Accra to take us to the fort.  He had relatives in Cape Coast and would stay with them.  He would look for fares around the town until time to take us back to Accra.

Our first day in Cape Coast – Wednesday – was spent around our hotel.  There was a beach nearby and we walked around town.  The weather was good for the entire trip, warm enough for a tee shirt, cool enough not to sweat.  That made walking easy.  We kept lists of bird species we saw and managed to add a few we had not seen in Wechiau.  We each reached over a thousand.

Kakum Nature Preserve was not far from town.  “Let’s have a look.”  Couldn’t get hold of our driver.  Got a taxi at the hotel.  When it left us, we arranged for a time to pick us up.  The preserve was interesting.  It feaured a ‘walk through the trees’ path made of rope where we were ten meters above ground most of the time. 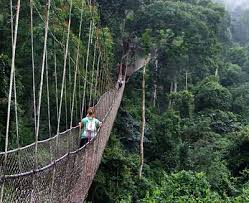 At a small village just down the road we managed to get a ride in a jitney, a large van with a driver and a money handler.  When we paid our fare, the bus was not crowded.  Not to last long.  As more and more people got on, I lost sight of Christine; she was pushed to the rear.  When it was time to leave, she managed to make her way to the exit.  Finally we got to our hotel, had a good meal and relaxed in our room.

The next day – Thursday – we visited the fort.  The tour was interesting, but depressing.  Knowing what occurred there did not make a person proud of some members of the white race.  It’s a part of the trip I’d like to forget, but never will. 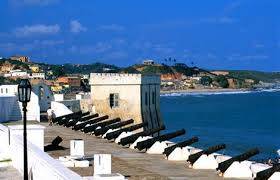 The guns of Cape Coast Castle

When it was time to head back to Accra on Friday, our driver was a little late.  Still we had plenty of time to get to the airport.   A good thing because after driving about an hour: Bang.  Flap, flap, flap.  Yep, flat tire.  “No problem,” the driver said; there was a spare.

As I watched the spare put on, I thought we might have problems.  Sure enough.  We hadn’t gone very far: Bang, etc.  No spare, what to do?  Our driver again said, “No problem.”  He knew where to get another tire, hitched a ride and headed down the road, leaving us and the car in a place more like Kansas than Africa.  No jungle, only corn and soybeans in the fields.

Not long afterwards two locals walked by and began to chat.  And chat.  And chat.  We soon realized that as long as we were there they were not going away.  Hours went by, no driver.  We did have a plane to catch late that night.  Finally a bus came by.  We hopped on.  The bus took us to a station in town where a couple of hundred locals were standing around.  Why, I don’t know.  We found a taxi and headed to our hotel in Accra where we had left some clothes.

But what to do about paying the original driver?  Did I want to pay him?  Maybe not.  But I knew he needed the money.  Two well-dressed locals also going to airport suggested I leave the money at the hotel.  The taximan could get his fare there.  This I did.

As we stood in line at the airport, who should accost us?  The driver who took us to Cape Coast.  He wanted his fare.  I told him it was at the hotel just as Christine and I went through the checkpoint where, so I assumed, he could not follow.  However, he soon appeared – and with a policeman.

When I found Christine, a big Ghanaian was with her.  He demanded money for ‘protecting’ her.  Did I give him money?  What do you think?

Did the experience sour us on travelling?  No way!  We’ve been on enough trips to know events do not always go as planned.  The only way to avoid problems is to stay home.  Horrible thought!  This time we got one interesting tale to tell. 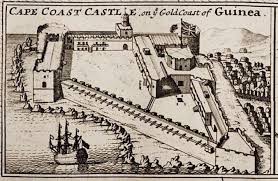 A sketch of Cape Coast Castle - notice the designation