Joanne Leedom-Ackerman is a novelist whose works of fiction include The Dark Path to the River and No Marble Angels.  A former reporter for The Christian Science Monitor, she serves as a Vice President of PEN, the world’s oldest and largest writers organization with 144 centers in around 104  countries.   She recently visited Western Sahara.  Here’s her account of that trip.

I first learned about the Western Sahara in the early 1990’s when I was chair of PEN International’s Writers in Prison Committee. My job, along with researchers on the staff in London, was to coordinate the work of PEN members around the world on behalf of writers in prison, threatened or killed because of their writing. There were hundreds of cases around the world, but few more challenging than those coming out of the Western Sahara, where writers were isolated in cells too small to accommodate them and were told they had been brought there to die. The conflict between the Moroccan government and the Polisario, representing the indigenous Sahrawis, was particularly harsh, and the accusations of abuse were coming from both sides.  The stories I read never left me.  Twenty years later I briefly visited the Western Sahara. 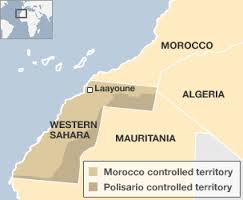 The desert stretched out like a beige patterned quilt as far as the eye could see. The pattern looked like birds’ wings or boomerangs in the sand as the plane descended, then the swirls of sand resolved into rocky ground. In the distance a few concrete buildings rose around the pink watch tower of the airport as I landed in Laayoune in the Western Sahara.

A 103,000 sq mi stretch of desert and coastline twice the size of England, larger than all of Great Britain, the Western Sahara is called by some “the last colony.” Extending south between Morocco and Mauritania with almost 700 miles of coast edging the desert, the region has been in a political quagmire for the last four decades.  Spain and Mauritania renounced their claim to the area in the late 1970’s, leaving only Morocco and the indigenous Sahrawi’s in dispute.

In February, 1976  the Sahrawis declared a sovereign state, Sahrawi Arab Democratic Republic (SADR). For almost 16 years (1975-1991) Moroccan forces and the Sahrawi indigenous Polisario Front engaged in armed struggle. For the next 22 years the United Nations has overseen a political limbo. A referendum on independence was promised but has been stalled year after year.

I first became interested in the Western Sahara in the early 1990’s when the stories of torture and the conditions in the prisons of the Western Sahara were as grim as any I encountered.  Many died and never made it out of the prisons, which were run by the Moroccan security forces. There were also bleak reports from prisons run by the Polisario rebels.

I still remember stories of writers who took their bar of soap they were given each month and wrote poems on their trousers. The writers then memorized each other’s poems as a way of staying sane. They also scoured the prison yard in the one hour they were given each day and found scraps of paper and used coffee grounds to write their forbidden verses. Their stories demonstrated how one endured—through fellowship and a flight to the imagination. 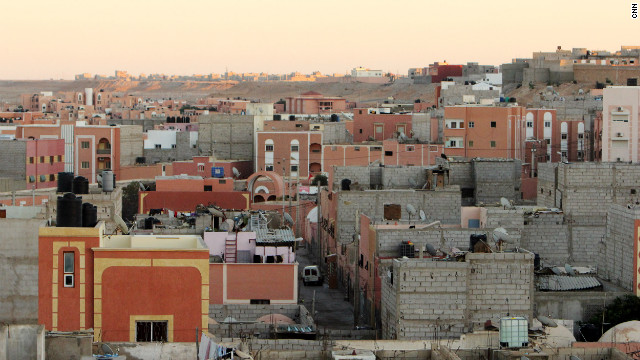 A glimpse of Laayoune, capital of Western Sahara

Since that time the armed conflict has officially ceased; Morocco has granted amnesties, and most of the prisons have allegedly been closed, but there are still reports of  “black jails” with grim conditions even in the capital. There are large areas where no one is allowed to visit.

My visit was brief, the visit of a tourist. I hired a taxi recommended by the small parador where I stayed, the hotel itself recommended by a friend of a friend who worked at the U.N.  My driver spoke Spanish and Arabic, some French and little English.  I speak English, some French, less Spanish and very limited Arabic, but we managed. I asked him to show me around the city then take me into the desert and then to the beach.

Those living in Laayoune are living their regular lives, women in long djellabas with head scarves, children going to school—you can hear their chatter and laughter on the streets—men also in djellabas or slacks selling in the shops and markets.

But the area is a high security zone. The U.N. and the Moroccan security are present, and travel is restricted. No one is allowed too far east where a giant man-made sand berm separates the Moroccan-dominated region from the smaller Saharwi Polisario region near Algeria. Land mines are said to be scattered throughout the no man’s land in between.

In my 24 hours in the capital Laayoune, a city of around 200,000 with 70% of the Western Sahara’s population, I was stopped at six checkpoints. Two were on the way to the desert where a two-lane road stretched through the sand and rock. Any other journey in this area would need to be made with an off road vehicle or on a camel, but I saw only a few camels. 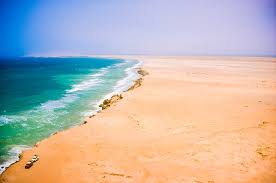 A beach in Western Sahara

At one point on the way from the desert to the beach, I was delayed for 45 minutes with my passport examined twice.  Everyone was friendly; I was friendly. A policeman with a moustache wearing a crisp blue uniform with white belt and military hat, looking very French (though the larger influence in the Western Sahara is Spanish), stood in the middle of the highway to stop us, then came over to the taxi.

“Bonjour,” he smiled at me. “Bonjour,” I replied. “Passport?” he asked. I handed him my American passport. My driver had already called another policeman whom we waited for at a designated place in the city to get permission to go to the beach. At the beach are the fish processing plants and a phosphate plant as well as a promenade and beach and the Atlantic. We were given permission so I’m not sure why we are being stopped.

“Profession?” he asked. “Ecrivan,” I answered.  “Journaliste?” he asked with suspicion. “No…ecrivan…romans.” I smiled. He smiled. He took my passport and went back to his car where he and the driver conferred for fifteen minutes. I watched them in the side mirror and wondered if I should get out of the car but decided I should stay inside. He returned to the car and gave me back my passport. He smiled  I smiled.  But still he didn’t let us go.

Meanwhile cars and a few trucks passed by without being stopped. They were driving south either towards the beach or all the way down the highway to Mauritania, over 600 miles away. I’ve been told this is a smugglers’ route. I wondered what traffic might have passed while I was being checked.

The driver returned and asked for my passport again. Another fifteen minutes went by. I continued to watch them in the rearview mirror. Finally I got out of the car. I didn’t walk towards them. I just stood leaning against the taxi in the wind—a lone American woman traveling in the desert, sitting in the front seat of the taxi because it gave me a better view. I was probably not a sight they were used to. After almost forty-five minutes, we were finally released.

I don’t know what the conversations were. The driver told me it was about his license plate; one of its numbers was wrong; he was given a fine. Then why did they need my passport…twice, I asked. But he had no answer I could understand. Instead he took me to lunch at a restaurant on the beach, which I thought was  either his father’s or his father worked at, then he invited me to his home, where he told me his mother had made me tea. His mother didn’t appear, but a tea service was set up, and he served me the delicious sweet mint tea in an elaborate Moroccan tea ceremony.  When I paid  him at the end of the day, I tipped him enough to pay the fine though I didn’t really know what happened, but we were smiling.

At the hotel, the U.N. representative who is a friend of a friend picked me up to go to the airport. Coincidently he was on the same flight back to Casablanca, where he would then head to the Azores. He was preparing for a meeting that would happen later in the fall. Fifteen refugees living on the Moroccan side of the sand berm will meet with refugees living on the Algerian side to discuss their lives. Observing them will be three Mauritanian anthropologists.

The hope is that these meetings, which have occurred over the years, will help form bonds within the region. The larger hope for the region is that eventually real peace will break out. The topic to begin the discussion at the gathering will be: The Camel.

Next post: A visit to a Hippo Sanctuary in northwestern Ghana