Pamela Hussey who has told us about being offered the redo of the Nairobi mayor’s office and about an extraordinary Christmas in Samburu recounts a visit to George Adamson and his lions.

We flew over Kora Camp twice, announcing our presence.  At our second circle, coming in low to land, a battered Range Rover jeep appeared, spewing a trail of dust.  A deeply tanned figure was at the wheel with a mane of golden-streaked white hair and beard.  As the jeep sped toward the rough airstrip, no more than a clearing in the bush, we recognized the flowing mane.  It was our host for the next few days:  George Adamson.

I felt a palpable surge of excitement and anticipation.  George Adamson had been a renowned game warden in Kenya for over 35 years.  He had reluctantly achieved celebrity, along with his wife, Joy—a gifted artist whose paintings of Kenya’s tribes hang in Nairobi’s National Museum—when she published Born Free.  It chronicled their experience, especially with the lion Elsa, in rescuing and rehabilitating sick lions and returning them to their natural habitat. The book became a best seller in 1960, then was made into a popular movie in 1966 starring Virginia McKenna and Bill Travers.

As we stepped out of the little Cessna, George moved forward and greeted each of us with a warm smile and firm handshake.  I was struck at once by his kindness and dignity.  Despite increasing fame, this was a man who retained a modest manner and a sense of trust with his fellowman that mirrored the trust and affection he demonstrated toward all wildlife.

We unloaded our little bits of luggage—small duffels and overnight bags—pushed into the tiny cargo holds under the wing flaps.  The most important cargo, however, was not luggage, but boxes of food.  The rule was, if you visited George at his camp in Meru National Park, about 230 miles north of Nairobi, you brought food.  It wasn’t a condition of visiting—more a covenant of the bush—acknowledgment of how treasured staples and treats were in remote areas.  We had brought copious amounts of fresh vegetables, fruit, and staples like flour, sugar, maize meal, coffee, along with treats such as fresh milk, jam, beef, pork, chicken, and of course whisky, gin, and wine.

Several of George’s African staff arrived in an old pickup truck and loaded everything onto the truck bed.  We five visitors piled into George’s jeep and bumped along the rutted track to Kora Camp.  There were David Allen, our pilot and long-time safari guide and the husband of my good Nairobi friend from church Petal (who was not with us); Jeremy Hagger, a very bright and skilled Foreign Service Officer on my staff and his adventure-loving wife, Carole Wiley, and my brother Peter who had just flown from San Diego to Nairobi 24 hours earlier; he wore quite a dazed look on his face. 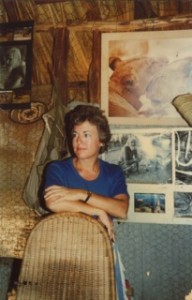 There was nothing elegant about Kora Camp.  About an acre of sandy soil was encircled by a 12-foot high chain-link fence.  Inside were canopied canvas structures with twin cots, a cook’s tent, a staff sleeping tent, George’s tent, and a palm-thatched wood-built dining area with table and chairs that also served as a kind of office. Plastered over the back wall were dozens of photos of lions and various memorabilia, and a large photo of his extremely handsome assistant, Tony Fitzjohn, who had been with George for 11 years, rehabilitating leopards, then on leave.   Neck-high thatched enclosures with poles and canvas bags of water on top with funnels  dotted with holes served as showers.

But it was the loo that captured our full attention.  This was no hole in the ground, but a capacious and inventive facility.  Grafted on to three sides of the chain-link enclosure, the size of a large lounge, were tightly clustered palm fronds.  On the far end of the rectangle, outside the fence, was a great rock outcropping.  Two-thirds of the way back from this rocky premonitory was a small trench with a pile of sand and a small shovel.  Over the trench was a large, shiny elephant’s skull with a natural aperture in the cranium.  This was the toilet, or loo, as the Brits call it in Kenya.  You sat on the elephant’s skull and did your business.

Above stretched the piercing blue sky.  And if fortune smiled on you, or fear besieged you, depending on your perspective, one or more lions could climb up on that rocky outcropping and watch you on the elephant’s skull.  The rock was higher than the chain-link fence.   Although set back at least 15 feet from the fence, from the vantage of the elephant’s skull it created the illusion that with one determined leap of a lion’s lithe and muscular body, you could be dinner.  It was slightly unnerving.  Particularly for my brother, Peter.  He remained in the fog of jet-lag and had been abruptly jettisoned out of civilization into a universe throbbing with the possibility of terrifying encounters.

(A side-bar.  Although rather dazed at Kora Camp and its exotic setting and characters, my brother Peter’s trip to Africa lasted six months and included many adventures.  One of these was completing the construction of David and Petal Allen’s new cottage in Nairobi.  Three years later he married one of Petal’s daughters, Robin Harragin.  They live in London and have two lovely daughters in their early 20’s.) 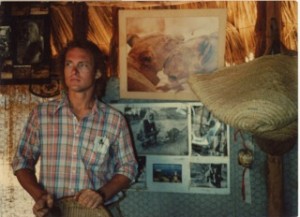 The magic of our visit to Kora took place our first evening.  We had just finished a most satisfying, well-prepared supper and were sitting on canvas director chairs around the campfire.  George and David were regaling us with bush stories and jokes.  During a short break in the story telling, George casually asked us if we would like to see a movie.  We looked at him rather incredulously.  It was not like we could run down to the local multiplex.  We were in the middle of nowhere with sand beneath our feet and a starlit sky.  But George insisted he could produce a movie for us.  So we gave him a strong but skeptical yes.

Within a few minutes, George had hauled out an old generator and a movie projector and we had hung a white bed sheet on the fence.  We were going to watch “Christian the Lion,” a documentary based on the true story of George rescuing and rehabilitating Christian and reintroducing him to the wild.  We lined up our canvas chairs on the sandy soil as if we were in a small, private theatre.  This was quite exciting to be watching a movie starring George and Christian! 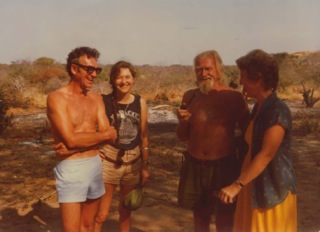 But nothing could prepare us for what happened during the movie. As the movie growls and roars of Christian the lion became louder and repetitive, they were answered by the roars of lions in the bush surrounding us!  No one moved; no one spoke.  We could hardly breathe.  It was like the call and response of a gospel choir.  These were not small cat cries but full-bodied, open-mouthed roars.  A symphony in the bush!  One could even imagine a conductor, nodding to Christian, “Your turn,” and Christian giving him a profundo bass roar.  Then the conductor turned to the bush, signaling with a dip of his baton to the lions in the wild, “And now, all of you.”

We knew we had been gifted with one of those experiences in the African bush that become embedded in consciousness.  You know you’ve witnessed something extraordinary.  And you thank the Divine for such a gift.

The next morning we found George sitting on a wooden crate outside the compound happily feeding a little dik dik, a small gazelle.  I will always remember George as a gentle man of great humility, kindness, and charisma who showed a virtual movie of great drama in his modest camp called Kora in the great Meru Reserve.  He is also the man with the world’s most unusual loo. 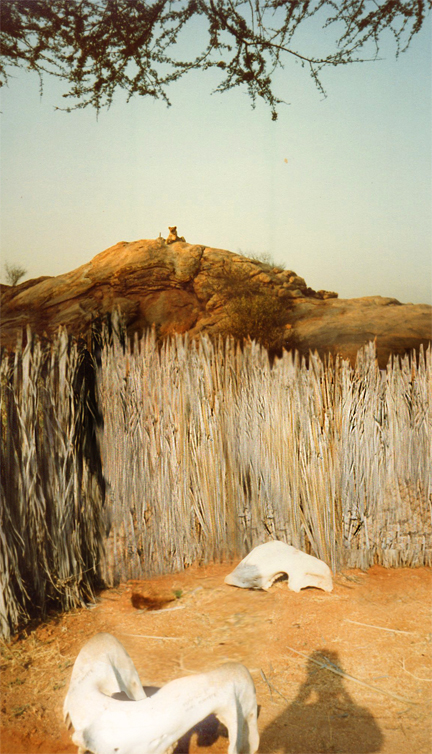 The loo at Kora Camp with guardian angel

(Editor’s note: If you Google “George Adamson,” you can access a short video with photos of him and his Kora camp.)