Jan Rudestam, who told us about losing her backpack in Ceuta and retrieving it thanks to the help of a macho Moroccan, gives us a sense-impression tour of Fez.

Fez, Morocco, in 1972, was the most sensual place I have ever experienced. Ken and I got off the bus just outside the stone walls surrounding the ancient fortified city. We trudged up the hill from the bus station, weighed down by our backpacks, surrounded by men in djellabas and women in long skirts and headscarves. Children ran up and down the main road, many of them walking next to us for a short while asking, “Where are you from? You America?” or “You need hotel? I take you!” Some of them offered, “You need guide! I be you guide!” their hands touching my pack, my arm, my hand. They begged for us to drop some coins in their grimy palms. 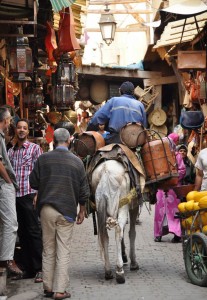 "Once inside the walls, the road narrowed."

Once inside the walls, the road narrowed. It was hot with afternoon sun and airless with the lack of any breeze. Donkeys and camels were led through the streets, bringing their distinctive smells. Their dung lined the street and we moved deftly to avoid having our boots covered in it. Dogs wove among us, lifting their legs against the mudded walls. The sour sweat of other human beings added to the mixture. The aromas of cinnamon and cumin, the whiff of mint, and the cloying incense were a welcome relief.

A wedding party marched through the street, horns blowing and drums clattering, fifteen or twenty celebrants carving their way through the crowd. Vendors called from every storefront, some of them aggressively placing themselves in front of us to bring our attention to their copperware or their woven blankets or their leather shoes. They shouted at us and at each other, urging, arguing, insisting, beckoning. We kept moving past the beautifully made and crafted displays. Maybe tomorrow, I would go shopping in the medina and run my fingers over the colorful fabrics.

I was an urban girl. I had lived my life in a big city and was familiar with crowds of people, traffic jams and smelly outdoor markets. I had crowded onto subways filled with beer-soaked men after hockey games, and onto summer streetcars with people from every country in the world pressed together. But this was beyond anything I had ever experienced. The crowded streets with their press of people and animals, the explosion of smells and sounds, the oppressive heat from the desert sun, the weight of the backpack, all of it overloaded my circuits. I was relieved to enter the relative calm of the hotel courtyard, close the door to our room, sink back on the bed and close my eyes. 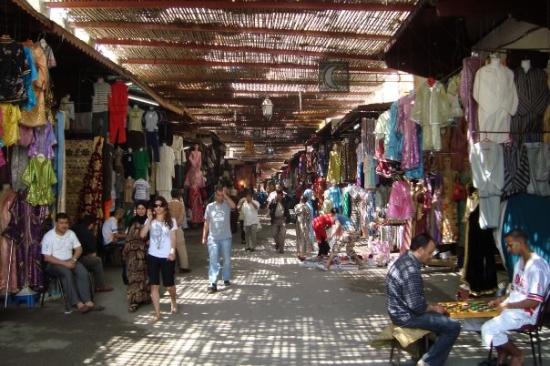 "Maybe tomorrow I would go shopping."

Two years later, I was sitting in a large lecture hall taking notes. The lecturer, a cultural anthropologist, was preparing us to watch a film. The lights went down and the film started. And suddenly, I was back in Fez. There were the people and the animals, the narrow streets, the bright sun, the vivid colors, the wedding horns and drums. And the smells. I smelled it all over again: the dung, the spices, the incense, the people. I felt again the weight of the pack and the heat of the sun. All of it came back, every sense organ remembering and reliving the experience of that day in Fez.