Biologist Richard Poole takes us on safari in Kenya and explains how frightening a safari can be – for husbands left at home.

When my brother, Edwin, was young he started an Africa Fund.  In went the pennies.  Finally he had enough and I decided to go with him.  Kenya was our destination.  We went with a tour company, about thirty travelers, all from the U.S.A.  Once in Africa we were separated into three groups, didn’t see the other two groups until the end of the trip.  We were split into smaller groups and assigned a van and driver.  We had a good group and an excellent driver.

The animals of Africa were obliging and appeared frequently.  We saw the Big Five: Elephant, Lion, Buffalo, Rhino, Hippo.  We were told everyone who came to Kenya saw the big five but not every one saw leopards.  We saw not one, but two leopards.  A big male reclined conveniently in a tree near the road and a smaller one lay partially hidden in the grass. 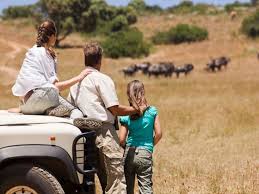 After dinner at one of our stops a friend and I decided to take a walk along the dusty road leading from our rooms.  The next morning as we left, the driver stopped soon after we started.  “There’re big leopard tracks in the road.”  Just where we had walked after supper.

The next stop was Tsavo, infamous for its man-eating lions.  Before the colonial era Tsavo was continually crossed by caravans of Arab slavers and their captives.  Many of the victims died by the wayside and were eaten by lions. Some lions acquired a taste for human flesh.  This might have contributed to the attacks by the Tsavo maneaters when In 1898 the British built a railroad through there.  Over a hundred workers were said to have been killed.

Tsavo is a flat dry open savannah with acacia, baobab and myrrh trees making walking pleasant.  The schedule at Tsavo was a morning game run, take it easy, read/sleep/whatever most of the day with another game run late in the afternoon.

One day of that schedule was enough for me.  I hadn’t come to Africa to read a book or take a nap.  Most of my fellow travelers were content to relax during the day, but not me.  And not Aardvark (a nickname; she gave me one as well).

The next day we told our tour guide we were going to take a walk for an hour or so.  “Oh, no.  You can’t do that, there’s a rogue bull buffalo nearby.”  We weren’t going to spend all day twiddling our thumbs.  After a little more discussion we were told a guide would go with us.  Great!  No problem.

Someone showed up.  I’m sure he was older, but looked twelve or thirteen.  He had a gun almost as long as he was tall.  We soon learned his English was practically non-existent; our knowledge of his language was even more non-existent.

Leading the way we wandered this way and that.  Our guide trailed close behind.  We went over a dry riverbed that crossed our path and decided to follow it.  Easy walking.  And intriguing things to see.  “Wow!  Look at that!  Must be a big snake to leave a trail like that.”  We got the message to our protector that we wanted to see the snake.

Off we went, easy spoor to follow, even for us, in the dry sand.  As he followed Aardvark and me, Protector had a silly grin on his face.   We were soon to learn why.  After walking a couple of hundred yards, we saw the remains of a dik-dik, a very small antelope.  Aardvark and I saw a “snake” trail but did not notice a jackal’s footprints.  Protector did.  Evidently, the jackal decided the spot he caught the dik-dik was not a good spot to have dinner.  So he dragged it along, creating a trail.  Protector understood that we thought we were following a “snake.”  He had a good laugh.  We enjoyed the laugh, also, and decided we should pay closer attention next time.  But that was the extent of our following spoor.  We never did see the big mean buffalo. 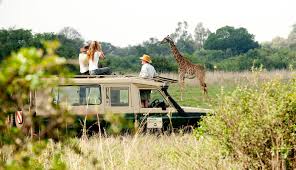 Marilyn was also on the trip with us.  I Iive north of Orlando, FL.  She lives just south of it and works at Disney’s Animal Kingdom.  Because she wanted to hear the lions roar, Marilyn stayed awake all night.  I told her she should have lived in the neighborhood I grew up in in Memphis.  We were close enough to the zoo to hear the lions.  This was a long time ago, prior to air-conditioning.

Now we’ll leave Africa and head home.  No more snake stories.  Let’s talk about husbands.  Since we were both headed to Orlando, Marilyn and I sat together on the plane to chit chat.  During our conversations she told me how worried her husband was.  He had not wanted her to go on safari.  She might get eaten by a lion or bitten by a cobra.  And there would be no communication for the entire three weeks.

As Marilyn and I were walking to get our luggage at the airport, I saw this man running towards us.  I’ve seen many a couple greet each other on return flights but never have I witnessed such a mixed look of relief and joy as when that guy grabbed and squeezed Marilyn.

A few months later I visited Edwin in Winston Salem, NC, where Aardvark also lives.  She and hubbie were invited for dinner.  Soon after they arrived, Aardvark pulled me aside, “Don’t say anything about the snake trip,” she cautioned.  “Hubby is still upset that I went on such a ‘dangerous’ journey.”

During the evening hubby cornered me.  He bemoaned the fact that he worried about see-above and he never heard from her, didn’t know if she was dead or alive.

What can we conclude?  When in a foreign country, let the locals lead, and look for the small prints, but the story wouldn’t be as much fun to tell.  And husbands shouldn’t worry about their wives in the perils of Africa.  They should tag along.  They might get to follow a trail of a BIG snake. 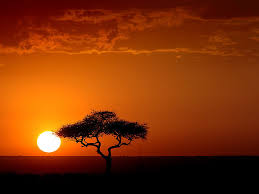 Next post: A task as detective in Eastern Congo.