South Africa-born David Marcus, pushed out of his homeland by apartheid, returned in 1994 to work as an air ambulance pilot and a wildlife photographer. His book Tales from the Cross describes the former.  For his photography see below.

(Editor’s note:  Customarily the blog provides the photos, grateful to have received text from contributors.  Since David Marcus is a wildlife photographer, he has provided the photos.)

I’m a Johannesburg boy, born in 1948 – when the National Party came to power in South Africa, and where it would remain for forty two uninterrupted years. Months after the new government took control, like the wisps of feathery cloud that precede a tropical storm, a few innocuous-seeming regulations appeared … followed year after year by a steady torrent of extreme legislation that eventually became known as apartheid.

There was no legal, effective way to fight the system locally. The sole genuine opposition party allowed in the system could muster only a single representative in the country’s parliament. Frustrated opponents and apartheid’s victims resorted to more extreme forms of opposition as the years went by. Like many others of my generation, sickened by the brutality and violence that characterized the government’s reign, I left the country permanently in the mid-seventies.

Then, fifteen years later, the National Party’s house of cards started to collapse … and with such astonishing speed, nobody could work out how it had endured for so long. For the first time in South Africa’s history, a fully democratic election was scheduled. I found the prospect of casting my vote irresistible. In 1994 I returned… 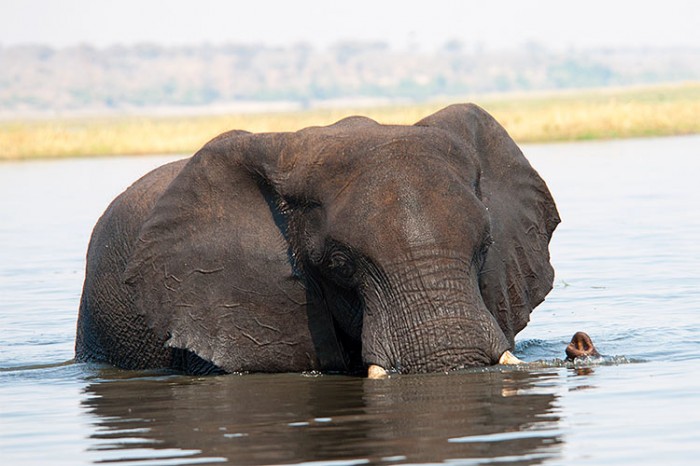 Chobe elephant breathing through its trunk

Intending just to drop my ballot paper into the box, dust off my hands, and leave. But with many years of experience in aviation someone suggested I provide some voluntary service as an air ambulance pilot. In the end I remained for three years, during which I crisscrossed Africa in a converted business jet on many an urgent medical mission. Most of them involved the dry logistics of patient retrieval and delivery, but some engaged me in circumstances that were literally too bizarre to believe … the kind of stuff that only happens in Africa. It took a few years to document, but I’ve done that.

These days I travel Africa for three months each southern winter as a wildlife photographer, driving through Botswana, Namibia, and South Africa. (This year, Zambia and Zimbabwe get added to the schedule). There are truly extraordinary things to see out there … 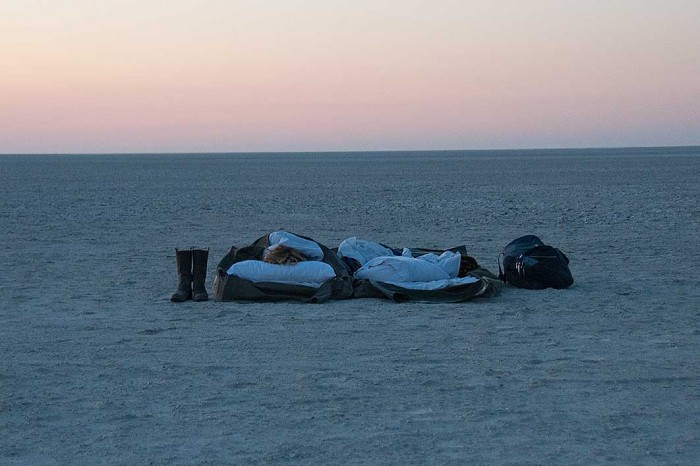 Ever slept in a billion-star hotel? Botswana has one … the Makgadigadi Pans, a dry lakebed the size of Switzerland. Local operators will arrange a quad-bike ride out to the middle, light a fire, and cook the evening meal in the utter silence of nowhere. Then you crawl into your sleeping bag laid on the open ground and gaze awestruck at the heavens above. It should cut everything else down to size. If it doesn’t, try a second night.

Instead of taking the short, sensible route to the sea from Angola’s southern highlands, the Kavango River turns east and inland, and flows into the Kalahari desert. The annual flood results in the Okavango Delta, a ten-thousand square kilometer paradise of crystal clear waterways and islands, teeming with wildlife. You can visit Elephant Island to see the three elephant orphans adopted by Douglas Groves and raised to adulthood by him during the past twenty-six years. The animals roam wild by day, hang out with Papa Doug at night, and will accept you if Douglas says it’s OK. They are obviously as intelligent as we are, (actually a lot more so, if you include those who hunt these creatures for fun), and have a keen sense of humor. 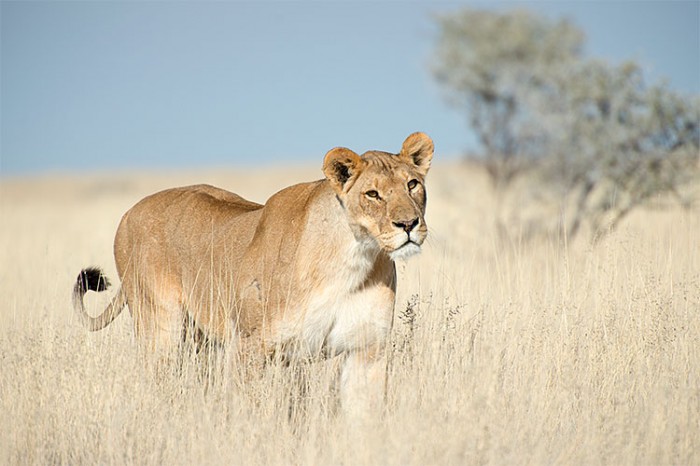 A lion in the Etosha Pan

Or take a look at the Savuti Channel, a waterway that links the Linyante River in northern Botswana with the Savuti Marshes around a hundred kilometers to the south. Botswana is very active seismically (Kalahari sands absorb the shocks so nobody notices), and the channel mysteriously starts and stops flowing with no apparent pattern. When it stops, the southern marshes get a little summer rain, and become a desiccated wasteland in winter. There a few hardy animals eke out a precarious existence. But when it flows – which it has since 2010, after a twenty-eight year layoff – the Savuti Marshes become a Garden of Eden to tens of thousands of animals all year round. Unmissable.

The largest concentration of elephants anywhere is in Chobe, a national park, running alongside the Chobe River on Botswana’s northwestern border with Namibia. You can set off in a boat and watch from alongside as they swim to an island in the middle of the river, tiny trunks of invisible babies below the surface clutching their mothers’ tails above the waterline in order to breath until they get there. 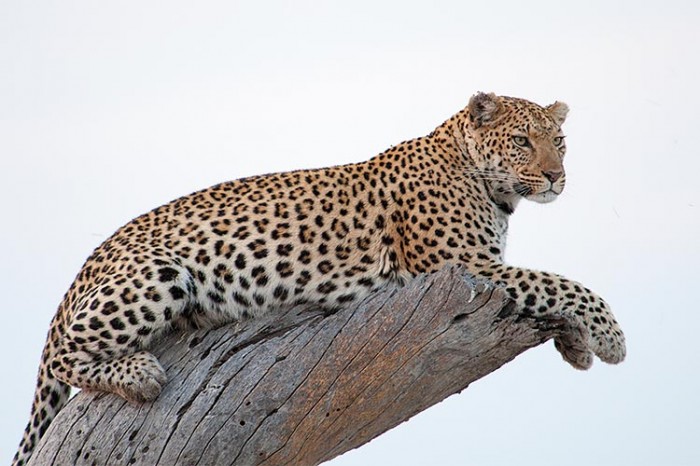 From Chobe you can cross the Ngoma Bridge into the Caprivi region of Namibia, home of Bwabata National Park and a migration route for thousands of elephants on their way to summer grazing in Angola. Drive west through the silent bush for hundreds of kilometers, and stop at the Kavango River for the night, as it wends its way south to the Delta. Then onward to Etosha … a seasonally dry lakebed six thousand kilometers square with perennial springs that flow along its edges and lots of grazing nearby. This is Namibia’s iconic wildlife reserve.

Entering Etosha from the east, plan a stay at Namutoni, a colonial-era fort in the middle of nowhere, straight out of Hollywood, converted to a comfortable rest camp. And spend a few nights at Okaukuejo, a rest camp at the other end of Etosha, where a waterhole virtually within the camp attracts thousands of animals every day during the dry winter season.

From Etosha there are many trails to follow. Head southwest, descending the five thousand foot escarpment, until you reach the Namib – the oldest and most mysterious desert in the world. There skyscraper-size dunes of myriad colors and shapes change hue by the hour, and life prevails against seemingly impossible odds. The dry places in Namibia have an unworldly beauty. Spend a week moving between them, and you may feel you have visited seven different planets.

I haven’t even reached South Africa yet … this introduction could occupy a thousand pages, and barely scratch the surface. See you on the road sometime. 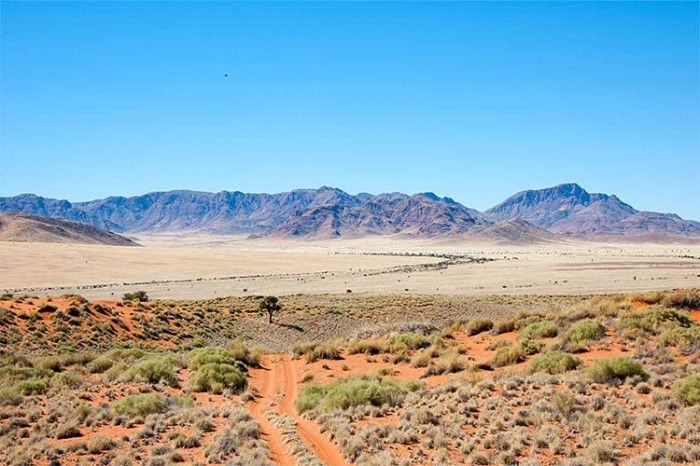 This may be the road you'll see him on; it's in Namibia.

(Although you cannot link directly from this blog, you can check out David’s book at www.talesfromthecross.net and his photography at www.africanimages.tv.)