Jan Rudestam offers two vignettes from her travels in Algeria where TIA has rarely wandered:

The guard rubbed his sleepy eyes as we pulled up to the border. Our driver had gone out of his way to bring us to this border crossing at a pass in the Atlas Mountains. He told us we would be able to hitch a ride into Tunisia from here and we thanked him as we took our backpacks from his trunk. I zipped my jacket up to my chin as I watched him drive back down the twisting mountain road. The air was brisk and cold early in the morning at elevation. I added a hat to keep my ears warm.

The guard leaned against the wooden shack and waited for us to find our passports. Like all the men I had met in Algeria, he was young and liked to talk. We chatted about the differences between Canada and the United States and about the Beatles and the Rolling Stones. My French was barely passable, but we communicated well enough while we waited for the truck or car that would take us into Tunisia.

The young guard laughed when we told him we were waiting for a ride. It was a weekend and a slow day for traffic on this stretch of road. We’d be better off walking, he suggested.

We picked up our packs and started to walk. I thought Tunisia, or at least its border, would be just steps away, just around that curve in the road. But it wasn’t. We were walking between borders, in a frontier zone that was neither Tunisia nor Algeria.

The road descended the lush green mountains. The silence was eerie. There was barely sound but that of our boots on the pavement. We barely spoke. For a long while, we saw no one. The temperature rose as we descended and we stopped to stuff our hats and jackets into our packs.

Soon we saw trails branching into the bushes and trees and stone houses with red tile roofs.  A woman appeared, stalking past us on the grass next to the road. She was tall and thin and had a regal stride. She wore a long full skirt that was ornamented with colorful embroidery and sparkling disks. The fullness of her skirt allowed her to move freely. The brightly colored scarf tied around her head seemed more about protection from the hot sun than about gender shame. Her face bore blue markings. She had no time for us, no greeting. She was an inhabitant of this odd frontier, not its ambassador. When we heard the bleating of sheep, we understood that she was a working woman.

As we continued down the mountain, we noticed small farms, fig trees, and almond trees. Children appeared with all of the laughter of children everywhere. More working women showed up, wearing full skirts and colorful scarves, carrying water and babies, washing clothes, tending to goats and sheep.

Just when I began to fear that we would wander forever like ghosts in this no-man’s land, the border appeared. It was a more formal border than the casual crossing from Algeria and the men in uniform took their time with our passports before they let us into the country.

Later I understood that we had been walking in the Maghreb among the Kabyle people, one of the Berber groups of North Africa. We had been in a world in-between: between Algeria and Tunisia, between colonization and religious fundamentalism, between peace and conflict. 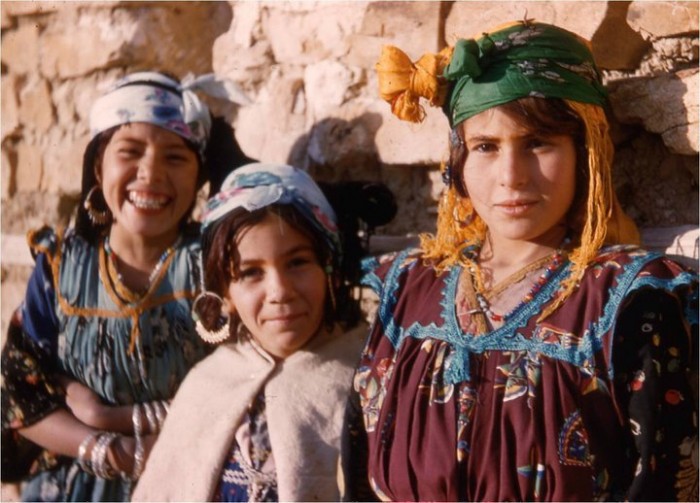 Walking through the neighborhood in Oran, there didn’t seem to be anyone over 30. It was a city of boys and girls, although the boys and young men were most visible.

Nonetheless, I felt safe at last from the stares and hostile comments I’d endured in Morocco. The Algerian War of Independence had decolonized the country ten years earlier. The French had returned to Europe, and the weight of fundamentalism had yet to fall in the city. In my memory, Oran hummed a tune of liberty.

We were there to meet with a friend of a friend in a modest neighborhood close to the University. We took off our shoes at the door, set down our backpacks, and followed our host to the living room. The door to the balcony was open, inviting a light breeze to cool the room. There must have been mint tea, because meetings were always accompanied by tea. But I can’t recall who brought the tea. Was it a vendor or was it a woman?

In retrospect, I wonder where the women were. My youthful memory had sketched them into the landscape, the neighborhood, and the dwelling, wearing jeans and billowing cotton blouses. But I doubt they were real, that they were anything but ghosts in my imagination.

I watched the blue sky and the tiny slice of ocean visible from the balcony. I was bored and restless, ready to move on. Ken and our host were talking business. I wasn’t included in the conversation, and so I tuned it out. I didn’t seem to belong anywhere or have any role in that place. My identity was vague and ill-defined. What was I? I was a westerner dropping in on the last moments of European influence. I was a woman under the protection of a man. I wasn’t invited to join the men’s conversation, but I wasn’t invited to join the women of the house either.

I have forgotten much of my visit to the city. We didn’t stay long. Our host arranged a ride to the border for the next morning. We were on our own again until then.