Bob Baker, USIS man extraordinaire, takes us along on some flying trips around Africa.

The elegant French Caravelle twin engine jet sailed south from Le Bourget to Africa in 1968. Over the Sahara the engines stopped and we drifted down, so quiet you could hear the wind whistle past the plane. Gosh, out of gas! I thought at least we had a chance to land on the flat desert. Then the engines started and we rose up again high above the sand. Whew! But that kept happening. I finally figured out that it was a way to save gas. That up and down continued all the way to Addis Ababa, very French. 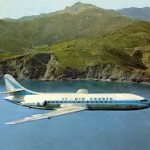 Addis is high up, about 7,500 feet. The land rises in plateaus so the jet just flew straight at the city and only ducked down briefly to land. Customs in the dark town were brief as we were on our way to Nairobi, then Kampala. But the onward night flight had been cancelled, so a rickety bus took all passengers to a hotel in Addis so new it stank of concrete, very dank and very cold. Our little boy caught chills in the night as no more blankets could be found. Later, I learned that our Royal Ethiopian aircraft had been ordered by Emperor Haile Selassie to Paris to pick up something he wanted right away.

Happily, next afternoon, after he got his delivery, we flew to Nairobi, then on to Kampala, Uganda. Breakfast was served en route to Kampala. I had just finished feeding little Sasha on my lap when she turned to me and threw up her eggs and toast, poor little button. She was astonished and cried in chagrin as I comforted her and daubed my tie with the corner of her threadbare comfort blanket.

Then another surprise, this time not at tie level, but from above. A stewardess in a neat blue uniform came down the aisle with a pump handle flit gun, turning from side to side to squirt above each passenger’s head a mist cloud of bug spray that settled down on your hair. It was a long-established way to prevent the spread of insects between East African countries. I guess it was the fairly benign pyrethrum-based spray derived from a local plant. An excellent Indian lady pediatrician treated Toby in Kampala that afternoon. 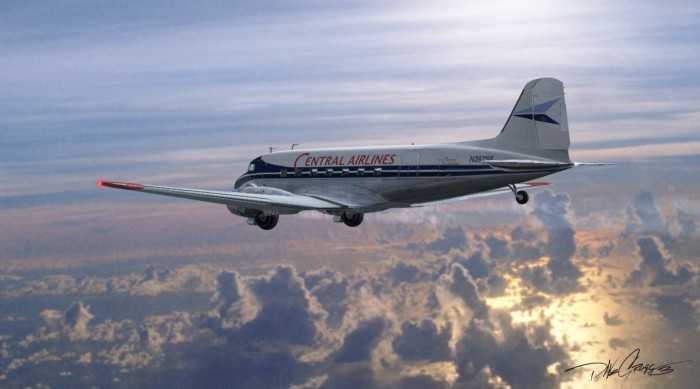 Malian DC-3s gave the most comforting flights I have ever experienced anywhere. They are maybe the most rugged planes built, can land on grass or dirt and have been called, “a collection of parts flying in close formation.” Replaced in rich countries, they were sold and resold, working their way down the airplane foodchain from the U.S. to Africa. They were perfect for Mali. And for me. Small, very low tech, and safe.

A Malian pilot often leaned out of his DC 3 window before takeoff to pull in a case of beer handed up to him by an airport ground crewman. I did not take alarm as it happened all the time and we never had a crash. All major Malian cities were on the grand Niger River which wound across Mali on its way to the far off Atlantic. Visibility was perfect except in the rainy season so Malian pilots flew just a couple hundred feet high and wound around following the great bends in the river from town to town. I felt we could land almost anywhere and never got lost on the way to Mopti or to Timbuktu or Gao way up in the Sahara.

The homey feeling was underlined by the Malian passengers who strolled chatting up and down during the flight some carrying their bundles. Usually a few chickens were tied loosely in the back of the plane, on their way as presents to relatives. Once in a while a small goat was tied to a chair leg. My only creature discomfort came when a steward plumped down in the seat next to me a long, person-size, heavy opaque plastic package and tied it in place with the seat belt. After he cinched the belt tight I turned to my left and stared right into a giant blue eye about 7 inches in diameter. Someone was taking along the gift of a big, delicious Nile perch. It was fresh so neither I nor the fish made a stink about it, but I was glad to see it was a commuter fish and got off at Mopti. I was usually the only non-Malian passenger and enjoyed the distinction and the free snacks, peanuts in the shell, but roasted. 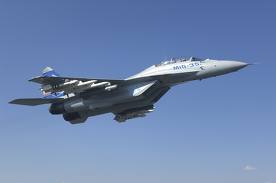 The only modern big planes in Mali were several Soviet MIG fighters (proudly flown overhead at the celebratory parade for independence day) and the US parachute brigade aircraft, both gifts in the 1960s to the Marxist/Socialist Malian government. Big signs at the Bamako airport warned us not to take photos of the MIGs. The U.S. had provided a couple sergeants and replacement parts to keep the brigade flying, but ended that support in 1968. Over beers in a café, a Malian Captain asked me to lend him $600 for a spare part he needed to buy in the U.S. to get his plane back in the air. I declined, but bought him a beer.

Flying around Africa in the eighties was much like flying in the U.S. except in Nigeria where I felt as at home as I did in Mali’s aviation. Flights in Congo, South Africa, Zimbabwe, Zambia, Liberia, etc. were well organized, but indifferent. In Nigeria flying was homey. I was once the sole white guy in a sweaty crowd of about 200 Nigerians in Kano’s airport, all wanting badly to go somewhere. I never felt anything but a part of the travelling world. Zero racial hostility, just irritable human pushing and shoving. The big flight announcement boards in the waiting room were broken, so people just surged out of the waiting room onto the tarmac when a plane’s propellers started to turn.

We’d yell up to the pilot to ask where he was going. Then the crowd headed in that direction would crowd on board. It was like getting on a Nigerian bus, you packed in until the pilot came back and forced some people to get off in angry disputes, but they got off. I guess because I was white, I was never told to scram. They also used old DC3s ; so though I felt hot and sweaty, I also felt right at home.

TIA invites readers in the Santa Barbara area to help launch a new novel by Frederic Hunter!  THE GIRL RAN AWAY is great summer reading! We meet Sunday afternoon, May 25, at 3:00 p.m. upstairs at the Encina Royale Clubhouse, 250 Moreton Bay Lane, Goleta.  (For directions, see below.)

THE GIRL RAN AWAY is the story of a young woman coming of age.  She travels widely (two continents), encounters some bumps, gets an education and learns about men (one good, two not so much).  She copes.  She blooms.

At the book launch we’ll offer refreshments and door prizes in the form of books.  No one should leave without something to read.

Here’s a synopsis: Elizabeth Jenkins, 17, raised on a Congo mission station, is under intense pressure to marry the station doctor, twenty years her senior.  Recently widowed, he needs a companion and a mother for his two kids – and a way to avoid being returned to the States, for the Society allows no unmarried male missionaries. Hours before the wedding, Elizabeth flees.  She runs toward the wider world beyond the station, toward the “Liz” she yearns to become.  She reaches Nairobi, but it’s no place for a sheltered young woman with dreams but no contacts or money.  THE GIRL RAN AWAY chronicles her journey.  Her mother and her best friend tell the story.

Remember! May 25 at 3:00 upstairs at the Encina Royale Clubhouse, 250 Moreton Bay Lane, Goleta.

How to get there: Take the 101 Freeway to Fairview.  Head north toward the mountains on Fairview.  The second street on your right is Encina Road (Fairview Theater on your left).  Go down Encina to the first octagonal red stop sign.  On your left you’ll see the entrance to Encina Royale at 250 Moreton Bay Lane.  Enter there and move forward.  The two=story Clubhouse will be on the right.  Street parking available.

For those who cannot attend the Book Launch, but would like to acquire THE GIRL RAN AWAY, the book can be purchased at www.CunePress.com.  Or on Amazon.

TRAVELS IN AFRICA: An elephant is born