David DeSelm may have had the best Peace Corps job you ever heard of.  Here he tells exactly what that entailed.

It was my second year as a Peace Corps volunteer in Tunisia.  I was working as a preservation architect for the Tunisian Directorate of Historic Monuments, along with Tony, Richard and Eric.  We were drawing the ancient Medina of Sfax.

Our task was to go into every house, every shop, every mosque, and every other building inside the ramparts of the old walled city, which dates back to the 7th century, and draw the floor plan.  The goal was to create a record of all development within the Medina that could be used as a baseline for urban planning and historic preservation strategies to protect and conserve the old city in a rapidly modernizing economy. 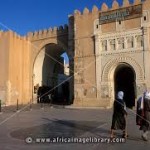 Gateway into the Medina at Sfax

Tony and I lived inside the Medina, in a typical Tunisian courtyard house.  Like all the other houses in the Medina, the outer walls of our house touched all the houses around us.  Each room faced a central courtyard.  A steep stair led up to the roof.  Outside, a pedestrian street led one way toward the rug market and the Grand Mosque in the center of the Medina and the other way to the red light district and the eastern entry gate.

Eric and Richard also lived in the Medina, on the top floor of another old house overlooking the Grand Mosque.

Jane and Karen, two Peace Corps English teachers, lived in a 6th-floor walkup apartment in the modern European district next to the Medina.  I climbed up the six flights of stairs often.  Jane was my girlfriend.

The European district had been bombed during WWII, and most of the urban center facing the Medina had been rebuilt after the war as a meandering mega-structure of mixed-use buildings.  Fortunately, the old Medina had not been damaged by the war. 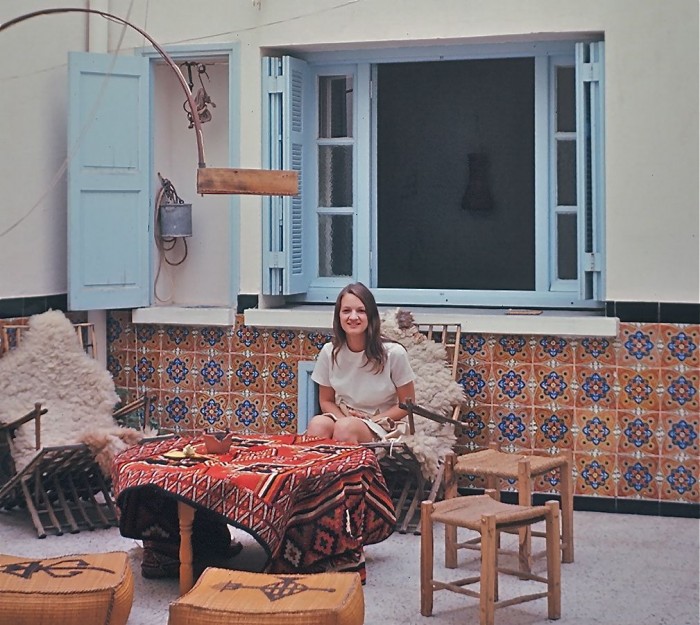 Girlfriend Jane sits in the courtyard of David's Sfax lodgings.

To draw the Medina, we had to figure out the configuration of hundreds of buildings, packed into a maze of winding pedestrian passages, where more than 14,000 people lived and worked inside the confines of the perimeter walls.

All we had to help us prepare the drawings were a fuzzy aerial photo and an old diagram of the street sewers installed by the French government during Tunisia’s colonial era.  We had no time or equipment to take measurements.  We had to solve the puzzle of fitting every structure into its place by “eyeballing” a sketch plan for each building.

So one day, we knocked on the door of a building facing one of the zig-zag pedestrian lanes inside the Medina.  The door was a little more elaborate than normal, and the empty space on our drawing for this building was a little larger than normal.  After our Tunisian assistant explained to the man answering the door why we were there and that we had the legal authority of the Tunisian government to enter the house and draw the floor plan, we were reluctantly allowed inside. 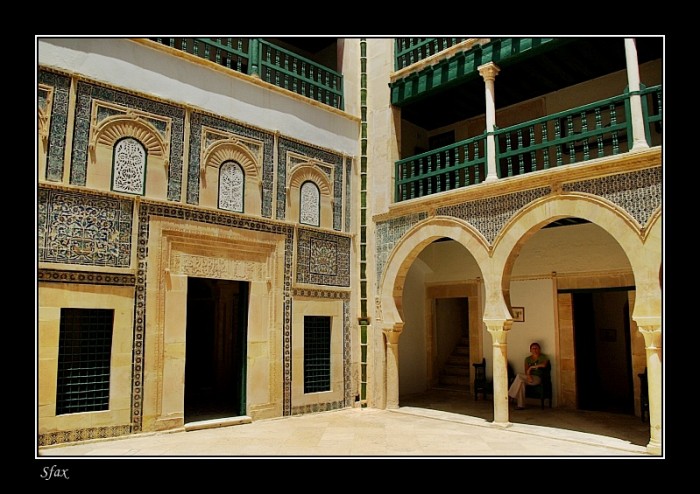 Sfax house similar to the one David's relates "eyeballing"

Because most people were hesitant to have us in their houses, we had learned to draw each floor plan quickly.   We’d go through every room as fast as we could, sketching the layout, estimating the dimensions, and trying to note all the windows, doors and details.

Since this was an old city built by hand over 13 centuries, there were hardly any straight walls or square corners.  We had to rely on our knowledge of having seen many previous houses, our understanding of typical floor plans, our sense of proportion, and the blank spaces left in our overall master plan to draw each building.

As soon as we entered this particular house, we realized that a wealthy family lived here.  From the outside, only the door gave a hint.  On the inside, there were many rooms on several levels, beautiful tile on the floors and the walls, and colored glass in wooden window frames.

We rushed around the house, sketching as fast as we could.  The owner wasn’t home.  It would be easier if we could get finished before he got back and started to argue with us.

In about 20 minutes, we were done.  We stepped outside and did one last check of our sketch plan before taking it back to the office where we would juggle it into the master plan.  We didn’t want to have to come back here to correct a mistake.

We turned around and knocked on the door again.  This time, the person at the door was really reluctant to let us in.  But we insisted.  We zoomed around the first floor, looking for a door that we had missed.  Nothing.  We sprinted up to the second floor, looking for the missing door…

Then, there it was…  a door at the back of another room.  I reached for the handle thinking it was locked – and it opened.

An explosion of shrieks filled the air.  The hidden room was full of young women!

I glanced around the space quickly, made a mental note of the proportions and the location of windows.  There were no other doors.  I closed the door just as the man from the front door rushed up to me shouting, “NO, NO, NO!”

We scampered down the stairs and out into the street.

Then it hit me.  In a secret room, hidden on a bridge, hanging over the street, we’d uncovered a harem! 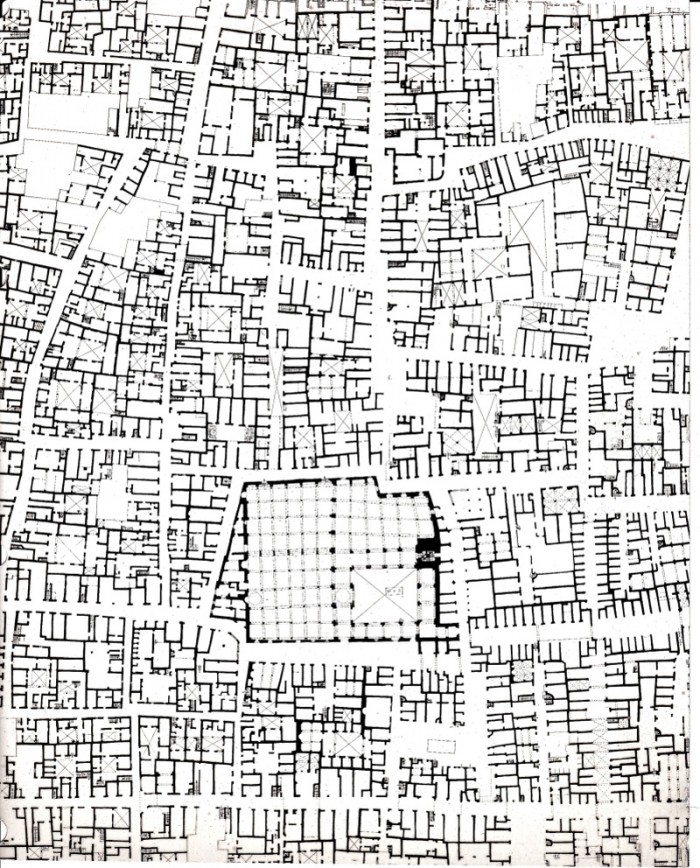 A portion of the medina plan David drew.

COMING SOON… THE GIRL RAN AWAY, a new novel by Frederic Hunter.

Elizabeth Jenkins, 17, raised on a Congo mission station, is under intense pressure to marry the station doctor, twenty years her senior.  Recently widowed, he needs a companion and a mother for his two kids – and a way to avoid being returned to the States for the Society allows no unmarried male missionaries. Hours before the wedding, Elizabeth flees.  She runs toward the wider world beyond the station, toward the “Liz” she yearns to become.  She reaches Nairobi, but it’s no place for a sheltered young woman with dreams but no contacts or money.  Can she survive? 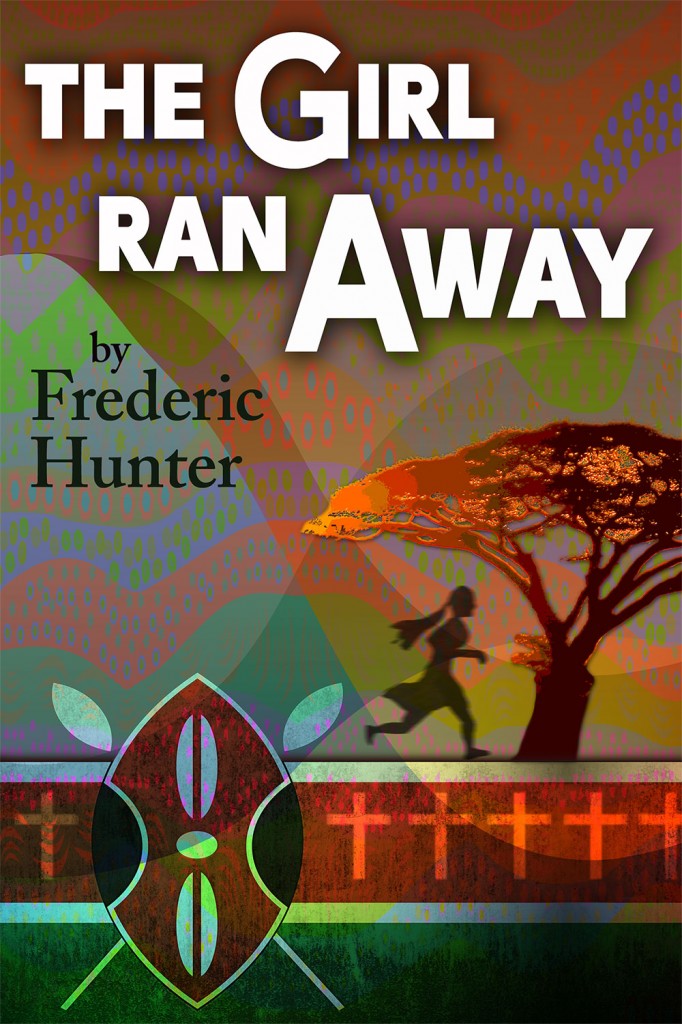 THE GIRL RAN AWAY will be available from Cune Press at www.CunePress.com by mid-May.  Or through Amazon.com.

TRAVELS IN AFRICA: An elephant is born